Why Did Angela Merkel Push so Hard for the UN Migration Pact?

The video below is a German commentary on the UN migration pact that was originally posted on the channel “Ebola — Virale Lügen”. According to the commentator’s analysis, the pact was at least partially designed to retroactively provide legal cover for Chancellor Merkel’s opening of the borders in 2015, which otherwise was illegal under current EU laws.

Many thanks to Oz-Rita for the translation and subtitling:

END_OF_DOCUMENT_TOKEN_TO_BE_REPLACED

Martin Hebner is a member of the Bundestag for the AfD (Alternative für Deutschland, Alternative for Germany). In the following video Mr. Hebner addresses questions to Chancellor Angela Merkel about the UN migration pact, which Germany signed last week in Marrakesh. In the back-and-forth of their exchange, Mrs. Merkel tacitly admits that the pact she signed is legally binding on the signatories once it is confirmed by the UN General Assembly.

END_OF_DOCUMENT_TOKEN_TO_BE_REPLACED

A Gates of Vienna  Hungarian correspondent sends the following report to give you a fuller picture of what is happening in Hungary — how outside forces are arranging for domestic disturbances in an attempt to destabilize the Orbán government. 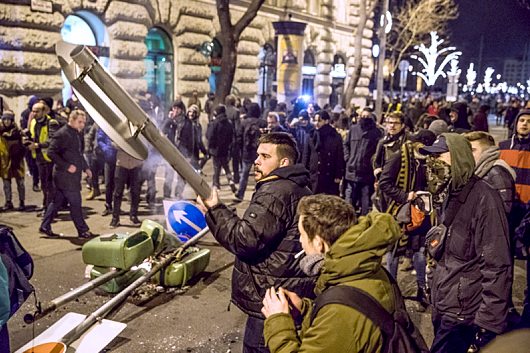 A Soros Rent-a-Riot Comes to Budapest

END_OF_DOCUMENT_TOKEN_TO_BE_REPLACED

Scott Morrison accuses the UN of ‘bullying and anti-Semitism’!

Can’t wait to hear our demented ABC-SBS cretins shriek about ScoMo “making Australia unsafe”. But this is a gutless move that does nothing for anyone.