The attacker is identified as Cherif Chekatt, a known Mohammedan criminal. He was born in France.

This morning Chérif Chekatt was about to be detained by the authorities for a murder attempt, but he was not at his residence. In search of the house, the police found several grenades.

The shooter is still on the run.

It appears that this is a Christmas jihad. It is amusing to note that the European Parliament members meeting in the city were placed on lockdown. They usually like the doors open, with masses of young military aged men streaming through.-– Bill Warner

Strasbourg’s been on top of the jihad hit list for decades. This time the jihadists succeeded. But there are thousands more, and they will try again and again to ‘strike terror in the hearts of the infidels’…. 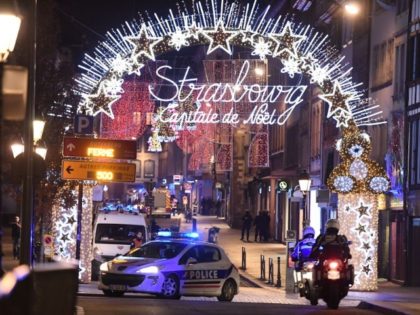 One was killed and three injured in a shooting in the vicinity of the Christmas Market in the historic French city of Strasbourg Tuesday evening.

The city is now on total lockdown after the shooting, with police armed with machine guns on the street and people taking cover in bars and restaurants.

French prosecutors say a terror investigation has been opened into the deadly shooting.

Security officials have cordoned off the market area and all trams have been stopped, according to reports from the scene.

The European Parliament was also placed on lockdown following the shooting with the orders “no one goes in, no one goes out.”

The incident happened close to the world-famous market which attracts two million tourists a year in bustling Place Kleber.

Vatican Stresses Rights of All Migrants

Turning Europe into EUrabia is not enough. These degenerates want to flood Europe with African savages.

Are they fleeing from Islam or are they invading to make us Islamic?

Great. You have no human rights unless we say so.

The suspect was described by cops as an “S File security risk” – which means  an individual considered to be a serious threat to national security.

These include gangsters, prison escapees as well as suspected Islamist radicals.

“There were gun shots and people running everywhere,” one local shopkeeper told BFM TV.  “It lasted about 10 minutes.”

Doris Manou told the BBC: “Earlier on I was walking around the Christmas market in central Strasbourg and I passed Place Kleber where the shooting took place just minutes before it happened.

“Then I continued walking on Rue du Dome when I saw the army with a group of 10-12 soldiers walking towards me with their guns pointed to the street and around them everyone was running from all directions.

“The soldiers were very focused on their mission, they were running.”

She said she and several others then threw themselves to the floor in a courtyard of a building thinking there could be a bomb, before some students in a nearby building offered them refuge.

She said she remains sheltered in the building having been advised it is not yet safe to leave.

Some of those on the scene reported they had seen victims lying on the street following the shooting.

A source at the prosecutor’s office said the motive behind the gun attack was not immediately clear and that an investigation was under way to see if it was terror-related.

France’s Interior Ministry said at least two people had been killed in the city, which is near the German border.

Regional authorities confirmed an “ongoing incident” in the city but gave no further details.

This may not be a jihad attack, but jihadis like to target Christmas markets for their symbolic value as celebrations of Christianity. 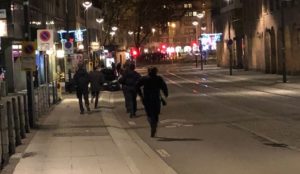 At least one person has been killed and a number of others injured after somebody opened fire near a Christmas market in the French city of Strasbourg, according to the local fire department.

The French Interior Ministry called on the public to remain indoors amid the “serious security event” in the city.

Here’s the latest email update sent to European Parliament staff, who are currently trapped inside during the lockdown. The email was provided to The Independent‘s Europe correspondent, Jon Stone. 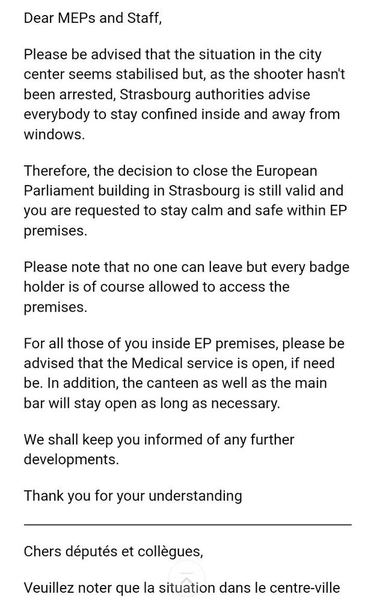 The death toll has been modified yet again: Two are dead and 11 people are critically wounded, according to AFP.

The French Interior Minister says that two people have been killed in the shooting in Strasbourg. That’s up from the one previously reported.
It is not clear if the second person is among those who had previously identified as injured.

The French Interior Minister says that the gunman has been identified because he was previously known to police.

The Christmas market was being held amid tight security this year, with unauthorised vehicles banned from surrounding streets during opening hours and checkpoints set up on bridges and access points to search pedestrians’ bags, according to Reuters.

Officials in the region have confirmed that 10 people were injured and one has died in the shooting in Strasbourg, which began around 8pm local time.
Police are urging people to remain in their homes and secure in the Neudorf and Par de L’étoile areas of the city.

The message also says that officials have identified the shooter and are “actively searching” for the individual….