“BBC asks if Muslim teenager who fled Saudi ‘should be killed for leaving Islam.’” The question is shocking, as is this question, also posed by BBC: “what is the right punishment for blasphemy?” Yet it was still asked by the BBC, and only after scorching rebuke from readers did a retraction and apology follow. But the damage was done.

As per Islam, the penalty facing this young teen was clearly spelled out in a previous Jihad Watchpost about 18-year-old Rahaf Mohammed al-Qunun:

The BBC should be condemning Islamic blasphemy laws and defending human rights and women’s rights. Rahaf Mohammed al-Qunun is a genuine refugee — unlike the multitudes of economic migrants that flooded Europe. She needs to be protected from those who want to murder her, and should promptly be given asylum in Australia.

Another young Saudi girl — another genuine refugee — was dragged back from an airport to Saudi Arabia to a presumably horrible fate while trying to escape the country in 2017. Dina Ali Lasloom ran away from her family after she was abused. She made it to an airport in the Philippines, but despite the scene she made with her desperate pleas for safety and freedom, Dina was last seen screaming and being dragged onto a Saudi Arabia Airlines flight from Manila to Riyadh. She was never heard from again. The Saudi embassy in Manila issued an appalling statement “calling the case a ‘family matter’ and added without elaborating that she had ‘returned with her relatives to the homeland.’”

Shame on the BBC, which should be highlighting the abuses resulting from Islamic blasphemy laws. 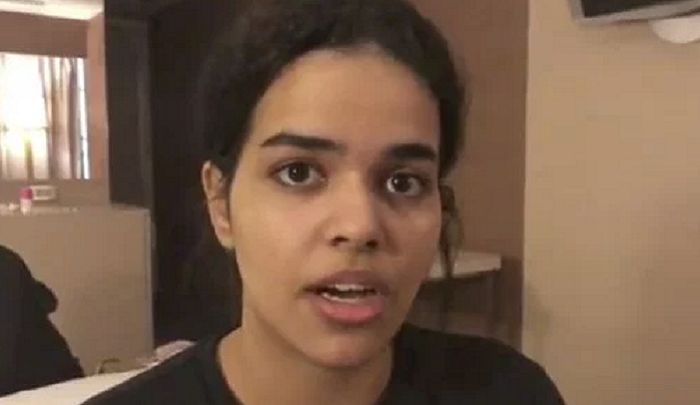 “BBC asks if Muslim teenager who fled Saudi ‘should be killed for leaving Islam,’” by Rob Waugh, Metro UK, January 9, 2019:

In a now-deleted Tweet, BBC Asian network asked viewers if they ‘respected the decision’ of a teenager who fled Saudi Arabia saying she would be killed for renouncing Islam. The Tweet read, ’18-year-old Rahaf Mohammed al-Qunun fled Saudi Arabia as she said her family would kill her for choosing to leave Islam – do you respect her decision?’ The Tweet was rapidly picked up by Media Guido – and the BBC posted an edited version minus the part about ‘respecting her decision.’

Irate readers responded on Twitter with comments such as ‘You’re a waste of taxpayer’s money,’ and the BBC rapidly deleted the Tweet and apologised. BBC Asian Network previously stirred up controversy with a Tweet asking, ‘What is the right punishment for blasphemy?’

Australia has said it will assess the runaway Saudi woman for settlement after the United Nations deemed her a refugee. The Department of Home Affairs confirmed that the UN High Commissioner for Refugees (UNHCR) had referred 18-year-old Rahaf Mohammed Alqunun to Australia for consideration for refugee settlement.

Ms Alqunun arrived in Bangkok on a flight from Kuwait on Saturday and planned to continue to Australia, for which she held a tourist visa. But after being detained by Thai authorities, she refused to board a flight back to Kuwait, barricading herself in a hotel room…..