How much longer will the people continue to respect the social contract when the political elites do not?

How censored will our voices be by law, how meaningless the “general will” become before we rip it all up and start again?

It is a strange time to be a citizen in a Western democracy. Our society is based on exchange — we transact in the free market, we share ideas online, and most significantly we give up some of our natural liberty in exchange for a civil society and a vote.

But increasingly, the freedoms supposed to be protected by civil society are being eroded away. At the level of the individual, our freedom of speech is under attack. Criticism of migration is apparently about to become “hate speech” and a prosecutable offence. 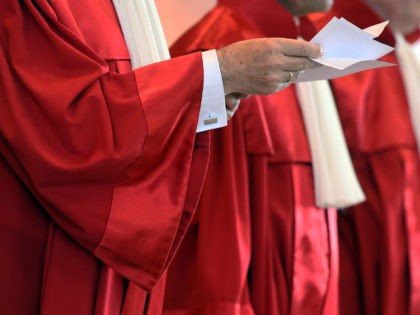 The German Federal Supreme Court has made a new ruling on a child marriage case which could have implications on the way child marriages conducted legally overseas are treated in the country.

The ruling comes from a case involving a Syrian man who was separated from his underage “wife” when the pair arrived in Germany as asylum seekers in August 2015, Die Welt reports.

The pair, cousins, were married in February 2015 while the man was aged 21 and the girl aged only 14 in a marriage procedure that was done under sharia legally in Syria but was considered invalid by German authorities where the marriage age was 16 at the time. 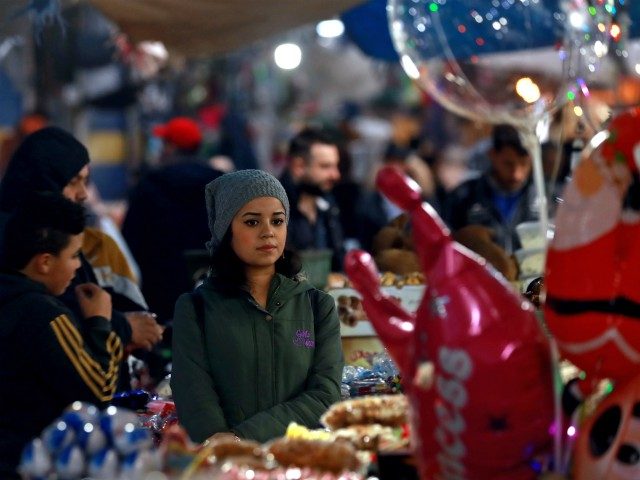 Syrian women are complaining that there are not enough men to rebuild the county, and have told Europe and other Western countries that have absorbed their young men to “kick them out” and send them home.

Journalist at Swedish public broadcaster SVT Johan-Mathias Sommarström travelled to Damascus, Syria, and spoke to some of the students at the University of Damascus, 70 per cent of whom he observed are women.

Another student, Lina, also noted the disproportion of the country’s population, shattering the liberal illusion that the migrant waves of 2015 were comprised of women and children fleeing war.

To solve the problem, the young student said that the Syrian government should issue an amnesty to men who left the country to avoid military service so that they can help rebuild the country, pointing the finger at Western nations that took in all the young male Syrians.

“The solution is to kick them out and get them to Syria where they can start building the country again,” said Lina.

When the authority of the nation state is ceded to a supra-national body, such as the United Nations, our power as citizens is diluted.

Based on the contractual theory of society and the works of Hobbes, Locke and Rousseau from the 17th and 18th century, real power is supposed to sit with the people; in order to retain moral character, government must thus rest on the consent of the governed, or the volonté générale (“general will”):

“What man loses by the social contract is his natural liberty and an unlimited right to everything he tries to get and succeeds in getting; what he gains is civil liberty and the proprietorship of all he possesses.” (Jean-Jacques Rousseau, On the Social Contract)

In the United Kingdom, the people were asked to decide between Leaving or Remaining in the European Union. 17.4 million people voted to Leave — 52% of the total votes cast and a clear majority. The general will of the people was Leave.

It appears increasingly likely, however, that this vote is being frustrated, either by legal obfuscation, a potential second referendum or other political manoeuvring. The possibility of a leadership contest in the U.K. over the coming weeks adds further uncertainty for Brexit supporters.

The powerful elite made it clear their preferred outcome was to remain in the EU.

According to “social contract theorists”:

“… when the government fails to secure their natural rights (Locke) or satisfy the best interests of society (called the ‘general will’ in Rousseau), citizens can withdraw their obligation to obey or change the leadership, through elections or other means including, when necessary, violence”.

Perhaps this helps explain the recent protests by the “Yellow Vests” (Gilets Jaunes) in Paris. Many had voted for Macron based on his promises to improve the lives of the ordinary French. They were outraged by his subsequent cut to the “wealth tax”, while increasing taxes for fuel.

Macron’s message seems: Global before national, wealthy before poor. But his dismissal of nationalism as “selfish” and a “betrayal of patriotism” is at odds with strengthening populist movements sweeping across Italy, Germany and mostly recently Spain.

Today, dissatisfaction with Macron’s Quixotic globalist aspirations — concerning the seriously disputed policies of “climate change” rather than with the economic and other concerns of the people who elected him — is increasingly widespread.

“Macron launched and shaped the movement as a bottom-up, revolutionary political organisation offering change, but since his presidential victory, LREM [La République En Marche!] has proved unable to evolve. It’s not just a party – it’s “Macron’s party”, a unique political creature whose only public face and leading figure is the president.”

Away from the anarchy on the streets in France, and the threat to democracy itself in Britain, other clear power grabs are in progress across our Western democracies.

The assertiveness of supra-national organisations with a focus on global policy-making is a direct threat to the sovereignty of the nation state, and a dilution of the power of the individuals within it.

A useful example is the United Nations Global Compact for Safe, Orderly and Regular Migration, which was “adopted in Marrakech on 10 December by 164 Member States.” The word “regular” should jar.

The United Nations intends to make it easier for migrants to relocate to new countries — with safeguarded routes, medical and financial assistance, and open access to public services and a means of income on arrival.

The document includes details on the “harmonization” of borders, rejects the right to detain illegals, and the options for facilitating the transfer of welfare payments back to the migrants’ country of origin.

Many countries with strong national political parties did not attend the meeting or sign the agreement; including Australia, the Netherlands, Austria, Bulgaria, Hungary, the Czech Republic, Poland, the Dominican Republic, Chile, Latvia, Slovakia, Estonia and Italy. And for good reason. The US has made clear its opposition to the document:

“In addition to our broad concerns regarding emerging attempts to ‘globalize’ migration governance at the expense of State sovereignty, the United States has specific objections to Compact text and objectives that run contrary to our law and policy… the Compact strikes the wrong balance. Its pro-migration stance fails to recognize that lawful and orderly immigration must start and end with effective national controls over borders.”

Most alarmingly, as MEP Marcel de Graaff neatly surmised from the Global Compact; “Criticism of migration will become a criminal offense.”

Objective 17 of the Global Compact seeks to:

“We commit to eliminate all forms of discrimination, condemn and counter expressions, acts and manifestations of racism, racial discrimination, violence, xenophobia and related intolerance against all migrants in conformity with international human rights law. We further commit to promote an open and evidence-based public discourse on migration and migrants in partnership with all parts of society, that generates a more realistic, humane and constructive perception in this regard. We also commit to protect freedom of expression in accordance with international law, recognizing that an open and free debate contributes to a comprehensive understanding of all aspects of migration.

“To realize this commitment, we will draw from the following actions:

“a) Enact, implement or maintain legislation that penalizes hate crimes and aggravated hate crimes targeting migrants, and train law enforcement and other public officials to identify, prevent and respond to such crimes and other acts of violence that target migrants, as well as to provide medical, legal and psychosocial assistance for victims…”

This censorship of dissenting views appears to go hand in hand with insanely expensive power grabs by supra-nationals. If opposition cannot he expressed, acceptance can be asserted. Acceptance must be made mandatory. This method was used to create the EU itself. Many in Europe were obliged to keep voting until they “got it right” — the way the elites wished.

At what point have we left all pretext of democracy and moved into the sphere of dictatorship, manifest at a supranational level?

If we know we are to be censored at the supranational level, to what extent does that awareness coerce self-censorship at the individual level? Given the disappearance of so many voices from Twitter, together with the vitriol of the on-line mob who demand that those with opposing views be “de-platformed” or forced from their jobs, many in Western Europe now fear to express an opinion outside of their own homes.

Thomas Jefferson wrote in the US Declaration of Independence that people are “endowed by their Creator with certain unalienable Rights,” which refers to the Enlightenment idea of natural rights — rights that the government cannot take away. Jefferson wrote that “among these are Life, Liberty and the pursuit of Happiness.”

If our governments sign us up to supranational bodies, such as the United Nations, the European Commission, the European Union, or the European Court of Human Rights — with their rules about the curvature of cucumbers, or their ambitions regarding migrants or policing speech — to what extent are we free? Our rights are being steadily eroded away.

The Declaration of Independence says:

“We hold these truths to be self-evident, that all men are created equal, that they are endowed by their Creator with certain unalienable Rights, that among these are Life, Liberty and the pursuit of Happiness.–That to secure these rights, Governments are instituted among Men, deriving their just powers from the consent of the governed, –That whenever any Form of Government becomes destructive of these ends, it is the Right of the People to alter or to abolish it, and to institute new Government, laying its foundation on such principles and organizing its powers in such form, as to them shall seem most likely to effect their Safety and Happiness.”

When a government does not protect the inalienable rights that are due to its constituents, the people have the right to change or get rid of it and to start a new government that will bring about their safety and happiness.

Given that these rights will be denied to those countries the leaders of which now support the Global Compact — including Germany, the U.K., Ireland and Canada — to what extent do the politicians deserve to remain in power?

A poll conducted across all 28 nations in the European Union in 2018 revealed:

The governments that signed the UN’s Global Compact appear to be acting in direct opposition to the general will of the people.

“It’s very simple: the globalist political elite doesn’t respect nation-states, nor does it give a damn about the views of ordinary people. Indeed, it despises them so much that it would much rather make their views illegal than listen to what they have to say.”

The real question, is for how much longer will the people continue to respect the social contract when the political elites do not?

Just how much power will be ceded to supra-nationals, how censored will our voices be by law, how meaningless will the “general will” become before we exercise Jefferson’s Right of the People to rip it all up and start again?

David Brown is based in the United Kingdom.

One thought on “Why Should People Respect the Social Contract when Politicians Do Not?”