Banglatrash: “Any book that hurts religious sentiment and disrupts communal harmony is prohibited.” On a three-day visit, Pope Francis will promote a dialogue based on tolerance and peace with the Muslim world.

Pope Francis starts a three-day visit to the United Arab Emirates (UAE) on Sunday, the first for a leader of the Roman Catholic Church in the Arabian Peninsula.

The pontiff will attend the Global Conference on Human Fraternity at the behest of the UAE’s leadership, which has proclaimed 2019 the “Year of Tolerance”, a move scorned by human rights activists.

Hundreds of Saudi women flee the kingdom every year and run away to Western countries over allegations of domestic abuse and oppression back home. One popular destination is the UK, where dozens seek asylum every year. Hanan Razek met two people who explain how they risked everything to flee from Saudi Arabia. Produced by: Dina Demrdash, Fahima Abdularahman (BBC, Jan 30, 2019)

A  Good Question for the Year of the Pig

What’s crazier–the belief that anyone who acts out jihadi-style must be in the grip of a mental illness, or the Western refusal to understand the precepts of jihad embedded in Islam’s holy texts that give rise to (and that validate) the “nutty” behavior?

Update: Equally bonkers–those who challenge the jihad imperative, thereby failing to uphold Canada’s “diversity-is-our-strength” bollocks, can be branded “anti-Muslim.”Update: Do you know which media outlet most definitely isn’t “anti-Muslim” (but which does have a distinctly anti-Zionist vibe)? No surprise, it’s the New York Times. None of the left wing mob who attacked this innocent Australian, who was peacefully carrying our flag on Australia Day were charged. This is madness. 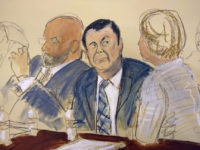 “The defendant (El Chapo) would call the youngest of the girls his ‘vitamins’ because he believed that sexual activity with young girls gave him life,” the court document revealed.

Mexico’s most famous drug lord, Joaquin “El Chapo” Guzman Loera, regularly paid $5,000 to have girls as young as 13-years-old drugged and brought to him for sexual intercourse, court records allege.

One thought on “Don’t you ever hurt my religious sentiments!”