That’s a real headscratcher, is it not? According to the late (insufferable) Senator from Arizona, John McCain, it meant the same as Christians shouting ‘thank God’.  What’s the big deal? Syndia was murdered by a Muslim migrant. Apparently one of his friends or at very least coreligionists decided to proclaim this as victory of Allah at her funeral service. Many people at the church, hearing these screams of “Allahu akbar,” fled.

In the New York Daily News. Zainab Chaudry of the Hamas-linked Council on American-Islamic Relations (CAIR) argued that non-Muslims shouldn’t “believe the worst” about “Allahu akbar” because Muslims don’t just scream it while murdering non-Muslims, but use it in a variety of contexts. She even offered this chilling advice, certain to get people killed were it ever heeded: “So the next time you hear Allahu Akbar — whether it’s in a media report, on an airplane, or in a shopping mall, remember that the phrase used by millions of Muslims and Christians daily to praise God regardless of their circumstances, can never be justified for use when harming His creation.” So stay put, evidently; fleeing would be “Islamophobic.”

On CNN, Omar Suleiman — the imam who prevailed upon Google to alter their search results so as to bury any negative information about Islam — also argued that Muslims say “Allahu akbar” in a variety of contexts, many of them positive. And the New York Times actually tweeted that the phrase “Allahu akbar” had “somehow” become “intertwined with terrorism.”

Somehow! How could this have possibly happened? Could it have anything to do with the thousands of Muslims who have screamed “Allahu akbar” while in the process of murdering infidels? 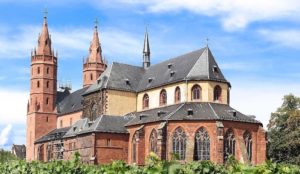 “‘Allahu Akbar’ at funeral service in Worms — people ran out of the church in panic,” translated from “‘Allahu Akbar’ bei Trauer-Gottesdienst in Worms – Leute rannten in Panik aus der Kirche,” Politikstube, March 10, 2019 (thanks to Searchlight Germany):

The case of Syndia, the woman allegedly stabbed by her friend, has moved Worms. Hundreds participated in a funeral march. Before the service that followed, there was an incident, the SWR reported.

The march was organized by relatives and friends. From the parking lot of a supermarket in Worms’ northern end, the mourners moved together to the home of Syndia’s parents. Police accompanied the march.

Following the rally, an ecumenical service was held in the Liebfrauenkirche. Just before the service began, an incident occurred. Witnesses reported that a man stood with his arms outstretched in the sanctuary calling out “Allahu akbar” (Allah is the greatest).

Many visitors to the church, who had already taken their seats before the service, then hastily left the church and alerted the police. Officials were able to arrest the disturber.