And rightly so. A religion that advocates for the killing people of other religious and ethnic groups should be banned world wide. 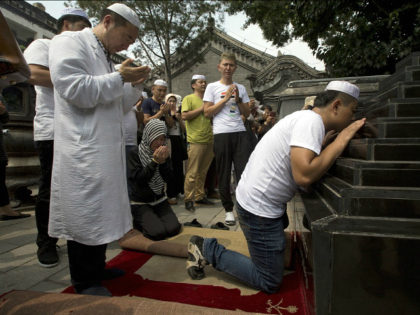 The Chinese government took its latest swing at justifying re-education camps for Muslims, and aggressive efforts to subdue all religious faith, in a letter to the Wall Street Journal published Tuesday.

China cited the Christchurch massacre in New Zealand to justify pervasive surveillance and gigantic detention centers for Muslims, arguing such methods are necessary to prevent violent friction between ethnic and religious groups.

The government of Muslim-heavy Xinjiang province claimed its heavy-handed methods were necessary to make Xinjiang safe for investment and commerce, which in turn offer the only long-term solution to unrest among the Uighur minority.

The latest technique Beijing is using to steamroller the Uighurs involves literal steamrollers: a “community redevelopment” project in the city of Urumqi that lookssuspiciously like ethnic cleansing. The Chinese are razing the ancient city to the ground, wiping out hundreds of mosques, restaurants serving traditional food, and bookstores selling Uighur literature.

The parts of Urumqi not dismantled entirely are littered with cameras, biometric scanners, and police checkpoints, turning the city into a huge prison. When the WSJ asked about Urumqi, the Chinese essentially responded that residents should be thankful for all the money invested to modernize their city and improve its infrastructure.

The Asean Post warned on Tuesday that China has made great progress on eliminating Uighur culture and religion and is confident the international community will do nothing serious to prevent it from finishing the job.

The article pointed out China’s profound hypocrisy in treating radical Islam as an existential threat to domestic security while actively supporting and defending it in countries the Chinese wish to destabilize:

With the exception of Turkey, even predominantly Muslim countries that were quick to condemn Myanmar for its treatment of Rohingya Muslims have remained conspicuously silent on China. While Pakistan’s military-backed prime minister, Imran Khan, has feigned ignorance about the Xinjiang crackdown, Saudi Arabia’s powerful crown prince, Mohammed bin Salman, has gone so far as to defend China’s right to police “terrorism.”

Emboldened by the muted international response, China has stepped up its drive to Sinicize Xinjiang by demolishing Muslim neighborhoods. In Urumqi and other cities, once-bustling Uighur districts have been replaced with heavily policed zones purged of Islamic culture.

The irony is that while China justifies its “re-education hospitals” as necessary to cleanse Muslim minds at home of extremist thoughts, it is effectively supporting Islamist terrorism abroad. For example, China has repeatedly blocked United Nations (UN) sanctions against Masood Azhar, the head of the Pakistan-based, UN-designated terrorist group responsible for carrying out serial attacks in India, including on Parliament and, most recently, on a paramilitary police convoy.

The Asean Post saluted U.S. Secretary of State Mike Pompeo for calling out China’s game on social media in March:

China has detained more than one million #Uighurs, ethnic #Kazakhs, and other #Muslim minorities in internment camps in #Xinjiang since April 2017. The U.S. stands with them and their family members. China must release all those arbitrarily detained and end its repression.

The world cannot afford China’s shameful hypocrisy toward Muslims. On one hand, China abuses more than a million Muslims at home, but on the other it protects violent Islamic terrorist groups from sanctions at the UN.

As a minor quibble, it is not quite “hypocrisy” or inconsistent behavior if China’s rulers have concluded Islam is a destabilizing force to be suppressed at home but nourished within competing nations. It is a characteristically cold calculation by ruthless Communist leaders, who have been making such calculations on a routine basis since the inception of their ideology. Hypocrisy comes into play when Chinese leaders pretend to be anything other than aggressive totalitarian adversaries prepared to use any means necessary to weaken other nations and protect their own grip on power.

The Chinese are staging a social-media counteroffensive to portray policies in Xinjiang as a justifiable response to terrorism, fully supported by the (non-Uighur) Chinese population. A major goal of the online campaign is to challenge all negative news and uncomfortable images from the Xinjiang camps as disinformation and fabrications.

The European Union criticized China for human rights abuses from its annual summit on Tuesday, but activists were disappointed the EU did not specifically name and condemn Chinese practices in Xinjiang, Tibet, and other oppressed regions. A demonstration that included family members of people imprisoned in Chinese re-education camps was held outside EU headquarters in Brussels during the summit.