French billionaires have pledged more than $300 million to help repair the cathedral of Notre Dame. Meanwhile, culture-enrichers on French social media celebrated the fire in the cathedral. (GoV) 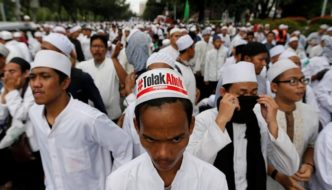 Indonesian election dominated by calls to be “more Islamic”

Indonesia is the largest Muslim country in the world, and has traditionally been regarded as secular, but now there is a strong drive to “become more Islamic.” This movement is growing and includes the usual lies being spewed to the Indonesian public, about Islam being oppressed by “foreign powers” and that “Islam will protect everyone, it will not oppress anyone.” Really? Well, for starters it will stone gays, oppress women, and murder apostates, and more.

The Sharia trend is gaining traction among the younger population, as “experts say the young voters, who comprise a big chunk of the electorate, are in support of conservative Islam.”

Last month “at least two women were left unable to walk after a brutal public whipping in Indonesia as punishment for alleged intimate relations outside marriage, with a total of six couples subjected to the brutal ordeal, carried out in accordance with Sharia law.” And just days ago, a Muslim family was sentenced for targeting three churches for jihad suicide bombings. With the trend toward greater Islamization of Indonesia, expect to see more persecution of Christians and other minorities, and other human rights abuses and barbarism.

You bet they do. What a great victory for Islam that was!

The fake news would have you believe, that a historical church that’s survived wars and everything else for almost 900 years…is suddenly up in flames by “accident.”

Danish police faced off against civil unrest and riots in a diverse suburb of capital city Copenhagen Sunday night, as local residents reacted violently to the presence of an anti-Islamisation campaigner who threw a copy of the Quran into the air.

That is the most accurate headline of all the English language reports I have read so far. It is from Reuters. While the violence was caused by those demonstrating against Danish critic of Islam Rasmus Paludan the others were slanted to hint that he caused the trouble.  For example the Copenhagen …Read More…

Although Denmark is home to one of Europe’s most successful anti-mass-immigration movements, the bleak facts concerning the effects of mass-immigration have not been taken seriously by the mainstream media, and politicians are often reluctant to address the matter.

How did this situation come about?