Meet the Muslim Deputy Mayor of the Sri Lankan city of Negombo. Mohamod Anzar was arrested after police found 38 phone batteries and a sword at his home. Negombo was one of the sites of the #SriLankaTerrorAttacks on churches. (Daily Mirror)

Sri Lankan Muslims who speak Tamil or Tamils who have converted to Mohammedanism:

“We will kill all kuffar (non-Muslims); spill their blood all over this country. For oppressing Muslims in #SriLanka, we will teach them a lesson.”

Islamic Oath! Terrorism has a religion and, you guessed it:  it’s Islam!

Authorities in Sri Lanka are searching for a Chief Islamic Cleric “of Vavuniya and Chettikulam divisional mosques” who released an internet video “justifying the Easter bomb attacks”. The cleric reportedly “cited an example from the life of Muhammad to justify the attack”. The global war on terror is rooted in Islamic doctrine. It is a core motivator. The cleric like scores of others recognizes it and preaches it.

The jihad attack on the churches that killed almost 300 people and injured hundreds of others “is said to have close ties to National Tawheed Jamaat, the Islamic terror organisation suspected to be behind the Easter Sunday bombings.”

While Sri Lankan authorities are busy protecting mosques with thousands of army personnel for fear of retaliatory violence,  authorities have shut down churches. Sri Lanka is being anything but effective in dealing with its jihad threat, demonstrating that it is not only ill-equipped to protect citizens against it, but has little will to do so.  Sri Lanka was warned in advance about the church bombings by intelligence officials from India and failed to act on those warnings to protect the churches. The Sri Lankan Archbishop Malcolm Ranjith also took Muslim envoys from jihad sponsoring states at their word who assured him that the jihad bombings had “no connection to Islam.” 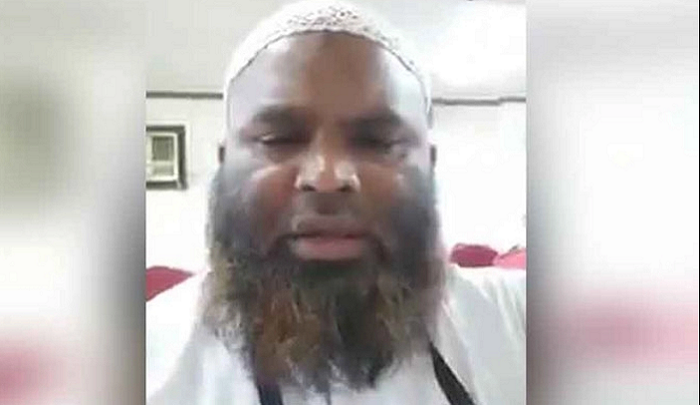 A search operation has been launched to arrest a Maulvi (Chief Islamic Cleric) of Vavuniya and Chettikulam divisional mosques who had released an eight-minute-long video clip via internet justifying the Easter bomb attacks on Sunday, Sri Lanka Mirror reported.

Vavuniya police announced that they plan to arrest the Maulvi for justifying the dastardly terror attack.

When as ISIS had claimed the responsibility of this attack, the Tamil speaking Maulvi Munajit, who wields considerable influence in Vavuniya region and has a significant social media footprint, released an incendiary video. Maulvi Munajit is said to have close ties to National Tawheed Jamaat, the Islamic terror organisation suspected to be behind the Easter Sunday bombings.

In the video, after a cursory mention about the victims, Maulvi Munajit cites an example from the life of Muhammed to justify the terror attack. Maulvi is heard saying that the attack is a consequence of Muslims losing their patience. He cites the example of Mohammed who kept quiet for the first 13 years of Islam despite intense persecution from Quraysh people but then launched the battle of Badr. Maulvi also had said in the video that to build an Islamic state is just thing and the struggle has just commenced for that….

Indeed, Allah has purchased from the believers their lives and their properties [in exchange] for that they will have Paradise. They fight in the cause of Allah, so they kill and are killed. [It is] a true promise [binding] upon Him in the Torah and the Gospel and the Qur’an. And who is truer to his covenant than Allah ? So rejoice in your transaction which you have contracted. And it is that which is the great attainment.

This is a lie: to kill and die for the religion is not in the Torah nor in the Gospel. It’s only in the Qur’an.

[It is] a true promise [binding] upon Him in the Torah and the Gospel and the Qur’an.

20 thoughts on ““We will kill all kuffar, spill their blood all over this country for oppressing Muslims””