The polls, which predicted a Labor win, were COMPLETELY wrong once again.

THEY CALLED IT A GLOBAL WARMING ELECTION. IT WAS. THEY LOST

In a surprise upset, the Liberal Party won today’s elections in Australia, confounding all the polls, which had predicted a clear victory for Labor. Scott Morrison will remain prime minister, and Bill Shorten has resigned as the leader of the Labor Party.

But the ABC/SBC climate propagandists keep droning on as if nothing’s changed.

‘Australians are dumb, mean-spirited and greedy’: Celebrity backlash after Coalition’s shock victory – as Yassmin Abdel-Magied says it will be a ‘long three years’ under Scott Morrison

The Project panelist hit back, saying ‘tax pays for everything outside your house genius. It pays for the hospital you’ll die in one day.’

Moslem agitprop Yassmin Abdel-Magied declared that ‘it’s going to be a long three years in Australia’ if Scott Morrison is re-elected.

‘Also – a warning to the progressive US counterparts, that even if things look good, ppl may surprise you (again),’ Abdel-Magied Tweeted on Saturday night. 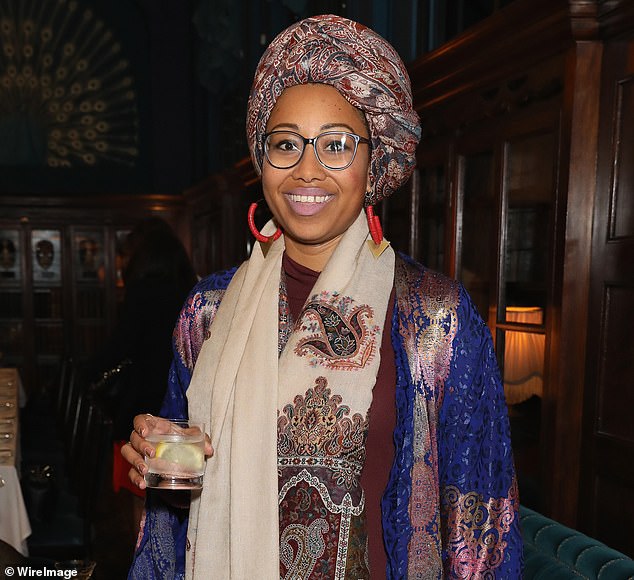 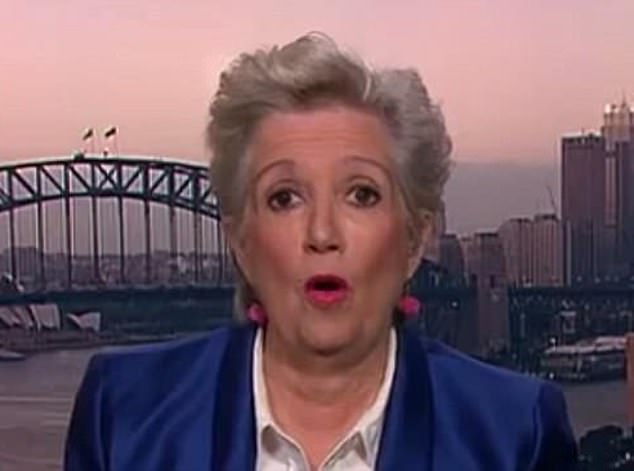 Social commentator and Sunrise regular Jane Caro also shared her dismay at the prospect of a Coalition government, declaring ‘if the LNP wins we have decided to be a backward-looking country in a backwater. I wish I was a New Zealander’

‘Australia. If the LNP wins we have decided to be a backward-looking country in a backwater. I wish I was a New Zealander,’ the novelist Tweeted in the midst of election results being counted.

Yesterday, The Washington Post tried to set the stage in prepping for elections, using the same tired old tactics of attacking “populists“, levying accusations about the rise in tide of populists who are supposedly shifting ‘reasonable’, right-of-center folk to the so-called ‘far right’, and blaming the latter for “cultural conflict” (instead of blaming jihadists and their Leftist enablers for eroding democracy bit by bit). Then there was the inescapable Leftist compulsion to malign Trump as WaPo did….

Americans tend to think that our politics are unique and that President Trump has caused all our political disruption. That’s not true. The same patterns of populism, cultural conflict and the movement of well-off and educated center-right voters away from their traditional party are happening around the globe. Australia, which holds its national elections …is a case in point.

The article went on explaining that…”Nearly 30 percent of all Australians are foreign-born, and the number rises each year, and that “this has led to the rise of a new populist party, Pauline Hanson’s One Nation. Hanson is a longtime anti-immigrant crusader who first rose to political influence in the mid-1990s. The recent influx of immigrants, combined with the increase in immigrants from Muslim countries, has given her a second moment in the sun.” WaPo also referenced Morrison as emerging as a compromise candidate, signifying its attempts to malign populism and dismiss Morrison as a possibility. Polls did indicate that he would lose, much like the Trump predictions right up to the ballot box.

The newly re-elected Australian Prime Minister Scott Morrison was humble in stating that “he had ‘always believed in miracles’ as partial results showed the Liberal-National Coalition close to a majority,” while mainstream media called the election results, “shocking”, perhaps in part because it is difficult to easily brand Morrison since he is seen as “center-right“.

For the out of touch mainstream media, there sure seems to be shock-waves, but there really shouldn’t be. There is a shift going on and although immigration issues are front and center, Leftist crass politicking and public manipulations have blurred lines of reasoning and thus, the sensible analysis of all possible outcomes.  It should be clear to anyone that citizens who have some clue about the state of domestic and world affairs (thanks to Islamization) should be at least interested in electing a leader who they can trust, one who represents their values, future well-being and confronts issues of pertinence like: securing borders (akin to putting locks on doors) against manifest dangers. They should also be concerned about a barbaric doctrine that has been seeping into Western borders and their homeland security as a result of it. They should be bothered about their children and grandchildren’s future in the event of rapid ‘Islamization’.  For ample clues about what that looks like, just observe the chaos in Sweden, Germany, France, and the UK etc. and while at it, observing the state of human rights in Islamic regimes might also be of use.

Australians have shown themselves to be more aware and reasonable than they are given credit for. Australians were studied in a recent poll, aimed to find out about their attitudes toward immigration.  Findings revealed that they were positive toward immigration, but are negative towards Islam. Why might that be? They are likely quite aware about the incompatibilities between Sharia tenets and Western constitutions, while at the same time, they are positive about “good” immigrants.

In an imagined scenario only for illustration: if Muslims will leave their political Islam at the door when they arrive in Western countries, they will be seen no differently than other faiths. Other faiths have not been the regular subject of news headlines and for good reason: they assimilate. Unfortunately, a troubling number of Muslims are not willing to park their sharia doctrines at the door.  Some Muslims practice their faith in peace and reject the parts about a Muslim’s jihadi duty to conquer infidels (via stealth taqiyya or violent jihad), deeming them to be antiquated. But far too many Islamic supremacist lobbies -acting as the voice and defenders of Islamic adherents–continue to bombard Westerners with demands for special privileges, and is in everybody’s face about “islamophobia”, just as Muslims abuse innocents wanton.   They also relentlessly attack free speech,  which is the cornerstone of democracy, and are well versed at manipulating democratic rights against Western countries, and at using anti-racism drives as a tool to benefit them.  They befriend far leftists who aid them with their victimology subterfuge, and cast aspersions on truth-tellers who highlight and warn about their global supremacist abuses and connections to foreign terrorist entities.

Scott Morrison has been refreshingly forthright in confronting the jihad problem in Australia, even though he is generally deemed by media to be “center-right“. He has been a reliable leader in protecting his citizens and democratic rule of law.  In so-doing, he has endured fierce condemnations.

Following a jihad attack by Hassan Khalif Shire Alithat, which left one man dead and two others injured last November, Morrison drew outrage from The Australian National Imams Council because of comments he made that linked Islam to a radical and dangerous ideology.” Morrison was in fact, rather gentle in delivering obvious statements. He stated that…

while he supported religious freedom, religious extremism must be called out.
“Radical, violent, extremist Islam that opposes our very way of life,” he said in a speech….Religious extremism takes many forms around the world and no religion is immune from it….But here in Australia, we would be kidding ourselves if we did not call out the fact that the greatest threat of religious extremism in this country is the radical and dangerous ideology of extremists.”

Morrison also faced attack for mulling a plan to strip jihadists of citizenship, and have them expelled from Australia–something every democratic country should be doing. Chair of the Joint Standing Committee on Migration Jason Wood reasoned at the time…

As far as I’m concerned, if you’ve put your hand up to say you uphold the rights and responsibility of Australian citizenship, but the next minute you want to talk jihad all day, it’s a breach of contract and you need to go.

Wood’s words were met with expected rage by the Muslim community which also lied that Morrison had suggested that all Muslims were culpable.

Morrison has also dismissed mental illness as an “excuse” for the “dangerous ideology of extremist Islam”.

And only two months ago, Morrison announced that he was considering breaking ties with Turkey over its leader Erdogan’s threats tied to the New Zealand massacre. Erdogan reportedly stated that “if Australians with anti-Islam views come to Turkey, we will send them back in caskets”.

The New York Times has summed up his win…

his coalition’s performance amounted to another swell in the wave of populist fervor that swept President Trump into office and set Britain on a path out of the European Union.

Morrison’s win has now led to the announcement that “his Labor opponent, Bill Shorten, will resign his party leadership.” Congrats to Morrison who has evidently advanced from center-rightbranding to populist.

As an aside, let’s hope that Australia switches back on Jihad Watch. Right before the election, major internet providers in Australia reportedly made Jihad Watch inaccessible (totalitarian style), along with other sites that warn about the global jihad and globalist mischief. 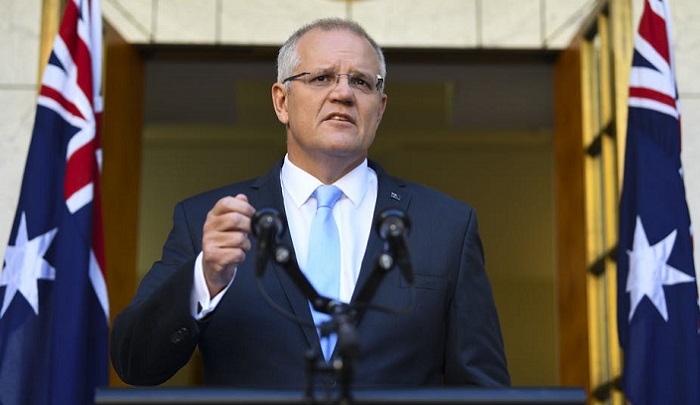 Australian Prime Minister Scott Morrison has thanked voters for re-electing his centre-right Coalition in a shock result at the federal polls.

He told supporters he had “always believed in miracles” as partial results showed the Liberal-National Coalition close to a majority.

Exit polls had suggested a narrow Labor win for the first time in six years.

The final result of the election may not be known for some hours, but with more than 70% of votes counted the Coalition has won, or is ahead in, 74 seats in its quest for a 76-seat majority, with Labor on just 66 seats.

The result nobody predicted

Try finding someone who says they saw this result coming.

For well over two years, the coalition has trailed behind Labor in the opinion polls, and the assumption had been it would be Labor’s turn to govern.

But somehow Scott Morrison managed to turn things around at the 11th hour – and he did it largely on his own…..