“Violence breaks out at Tommy Robinson campaign event as masked supporters clash with crowds”. The violence. It just keeps breaking out, like a flu going around. Eventually, at least, this story tells you who broke it out. The pictures are quite something. The Tribulations and Trials of Tommy Robinson

(no news whether the hurlers have been charged with assault)  This week has been busy for Tommy. Most important was probably the court case on Tuesday at the Central Criminal Court in London when Judges ruled that the case against …Read More…
.
See, it starts with milkshakes. “What fun! Haha! @BurgerKingUK is so funny!” Then it becomes bricks. Then someone gets dead. Then lots of people get dead.
.
It was always coming. With the dovetailing of corporate social responsibility and social justice causes (i.e. “getting woke”), big global businesses are now moving into the territory of actively encouraging political violence towards conservatives.
More below the fold.
.
Update:
https://twitter.com/ezralevant/status/1129836968551043072
.

In Paris, the “affaire de la jupe” (Affair of the Skirt), reported on in French here is one of those seemingly small contretemps, involving Muslims in the West, that circumstances turn into something much bigger. It begins with two women, North African in origin, who …Read More…
.

I missed this little nugget on Sunday, towards the bottom of this BBC report which I never finished.  A Sri Lanka suicide bomber was allegedly radicalised by notorious hate preacher Anjem Choudary while in the UK. Abdul Lathief Jameel Mohamed, 37, was the ‘link’ between Islamic State …Read More…From the Mirror.

It was always coming. With the dovetailing of corporate social responsibility and social justice causes (i.e. “getting woke”), big global businesses are now moving into the territory of actively encouraging political violence towards conservatives.

Burger King – which has a historically poor marketing performance amongst millennials – is seemingly trying to do something about it by targeting political figures unpopular with said demographic.

I said a few weeks ago things are about to get worse in the sphere of corporations involving themselves in politics. At the time I was thinking of Big Tech, but Gillette, Nabisco, and now Burger King are telling the business world: “Hold my beer”.

“Oh, but it’s just a few milkshakes that have been thrown at Tommy Robinson, Raheem! Lighten up!”

Sure, there’s somewhat of an organic history to politicians taking food items to the face on the campaign trail.

But compare a farm worker egging John Prescott 18 years ago to the organized, corporate-backed endeavors of leftists to try to harass right wing figures and it starts to get a little uncomfortable.

I’m not worried about some sugar-crammed Burger King shake hitting anyone. I’m worried about the unwieldy power of big corporates in politics.

If you’re not the type who likes to predict trends out, you should probably stop reading here. Because I’m not worried about some sugar-crammed Burger King shake hitting anyone. I’m worried about the unwieldy power of big corporates in politics, and what the end game is when the right inevitably fights back. And the police agree with me.

Fast food establishments in Scotland were asked to not serve milkshakes or ice creams during the campaign visit of Nigel Farage. The left has been openly organizing the splatter of shakes against their political adversaries for weeks, since it started happening to Tommy Robinson.

“We will not be selling milkshakes or ice creams tonight. This is due to a police request given recent events,” says a sign in the window of a local McDonald’s. But Burger King has different ideas:

11.7K people are talking about this

Originally, some on the left tried to defend the comment as Burger King just “being good capitalists” and allowing customers to buy milkshakes from them rather than McDonald’s. But over a series of “likes” and “retweets” on Twitter, the fast food giant revealed it was in fact making reference to the visit of Nigel Farage. In other words, a corporate social media account is now encouraging its followers to assault – albeit with lactose products – political figures.

That’d be sort of fine if that’s where it ended. And it’s not really sort of fine, anyway.

But it won’t end there, and the authorities know it.

More fights. More violence. More altercations. And why? Because some social media intern at Burger King thought it would be funny to tweet about milkshakes.

Conservatives and nationalists have been remarkably mild-mannered over the past few years, considering what physical and rhetorical violence is being done to them, routinely.

From social media censorship to Russia hoaxes, to the physical attacks on Brexiteers and MAGA hat wearers; the right has more or less kept its collective cool, throughout.

But this thread will begin to wear down to its thinnest when physical assaults sponsored by the Whopper with Cheese become routine or commonplace. They’ll start doing things back. And such, political life escalates in the UK, as it has done in the United States in recent months.

More fights. More violence. More altercations. And why? Because some social media intern at Burger King thought it would be funny to tweet about milkshakes.

Some on the left have been calling me a “snowflake” for not laughing along with the BK gag. I loathe the irony of being called a snowflake by someone who might cry if I misgender them, but then they are not with a sense of irony, anyway. All they really display nowadays is hypocrisy.

When people still believed Jussie Smollett, the outcry around political violence became shrieky and deranged. When his story was debunked, the left fell silent, even as MAGA hat wearers were continuously abused in public.

And why do I care so much about the prevalence of political violence? Because I have been the victim of it.

In 2015, when campaigning in Sandwich village in the South East of England, I noticed an older man with a hi-vis vest on, affixing political signs to lamp posts.

Because we were fighting such a close-run election, I decided to have a look at what he was putting up. Because you’re not supposed to do that. And if we did it, we’d be told off. It happened to be Greenpeace material. I told him to take it down. Instead, he climbed down off the ladder, picked it up, and smacked me in the head with it.

Escalation comes quicker than you think.

Naturally, I wanted to hit him back. But he really was an old bloke, and I didn’t want a news story in the papers the next day stating: “Farage Senior Advisor Knocks Out Pensioner in Parking Lot”. So I turned around, left, and reported the assault to the police. They said, “It’s just what happens”. I assume they meant during elections, not just in parking lots.

It’s always stuck with me how important it is to show restraint in those moments. Because if you don’t, escalation comes quicker than you think.

Look back to the Free Tommy rallies in London last year. We – the organizers – were hyper aware of, and critical towards a very small group of people who came to those rallies to start trouble with either AntiFa or the police. Back then, the left was really really against political violence. For like, that hot minute. Because it was us.

Oh and what about when James Goddard called Anna Soubry a “Nazi” and the police placed a suspension order on him, meaning he couldn’t go to Westminster or her constituency to exercise his right to protest anymore, because she was “scared” of his “violent” demeanor? Yes, suddenly the left cared about the potential for political violence, then.

But now Burger King are endorsing it, it’s all fun and games again!

“Milkshakes aren’t threatening. They’re funny! They taste so good. How could this possibly lead anywhere bad in very short order?” 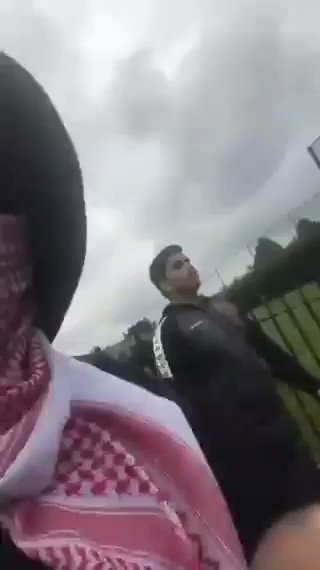 There is more footage on YouTube, if you care to see how things went down, and how the police did very little to stop it.

This is the same “It’s just what happens” mentality they told me about in Sandwich in 2015. It’s normalized now. Can’t stop it.

So normalized is it that Burger King thinks it can leverage national anger, frustration, and the division of our communities in order to sell a few more packets of fries. Maybe because Burger King made an allusion to milkshaking Nigel Farage, someone will “Go Large” on their next meal, and some fat cat in the soulless BK corporate headquarters in Miami can chuckle about how they made record profits by sowing discord within the communities around England.

A quick buck, indeed. Though not one without consequences. Remember, the Boston Massacre started with a snowball.