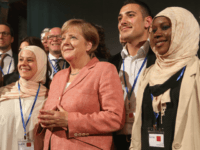 The former president of the Federal Office for the Protection of the Constitution (BfV) said that due to the significant consequences of mass migration in Germany today and going forward, those who made the policies in 2015 must be held to account for any mistakes made, Nordkurier reports.

Hundreds of millions of tax payers’ money is being invested in fighting right wing opinions as hate speech, islamophobia and racism, while Islamic terrorists are trying to kill us by the dozens quite successfully. Could anything be more ridiculous and absurd?! Just in case you had any illusions: Green doesn’t mean they care about the environment. What they seek, is total control over every aspect of your life. These are the same commie swamp-rats who congratulated Pol Pot and the Khmer Rouge to their ‘glorious revolution’ in Cambodia that left two million Cambodians dead in the rice fields. (Vlad Tepes video)