Italy at the Crossroads

ROME – Italy is in the news these days for two main developments. First, Interior Minister Matteo Salvini has – against massive opposition from the media, the judiciary, and the church – shut the country’s ports to illegal migrants and thereby reduced the number coming from the Mediterranean Sea by 97 percent between 2017 and 2019. Second, his civilizationist party, the League (Lega in Italian), went from winning 6 percent of the votes in the 2014 European parliamentary elections to 34 percent in those same elections last month, making it by far Italy’s most popular party.

Seen from outside Italy, these dramatic developments suggest that growing numbers of Italy’s 61 million inhabitants have stopped denying their country’s apocalyptic immigration and Islamization problems and are ready to confront the country’s existential threats. But is this really the case, have Italians turned a corner in the battle to control their destiny? What do the port closures mean and how significant is the rise of the League? 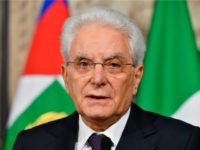 Matarella calls the invading Saracens “refugees”, which makes him complicit in the invasion & the population replacement .

Mattarella is the EUSSR’s man in Rome, more so even than the scoundrel masquerading as a Catholic pope in St. Peter’s. Italians are stuck with Mattarella until 2022 unless he can be removed from office or resigns.

To research these questions, I spent a week in Rome, meeting with 25 politicians, diplomats, journalists, and intellectuals espousing a wide range of views; Salvini was compared to everyone from Juan Perón to Margaret Thatcher. I came away impressed by the scope of the battle underway, one in which the civilizationists enjoy a momentary and vulnerable advantage that missteps could quickly reverse.

Italy’s challenges provide the context for this battle. Government at all levels is notoriously dysfunctional from Rome’s traffic to Genoa’s bridge. Its population has about the oldest median age in the world, 48. Nearly ¾ of Italians are pessimistic about the country’s future. With the largest government debt in Europe and the continent’s second largest government debt as a percentage of GDP, it is in danger of legal action and huge fines by the European Union. Lampedusa Island and Sicily make it the European country closest to the anarchy in Libya and therefore the most affected by Africa’s population boom.

Worse, the two dominant cultural forces in Italy – the Communist Party and the Roman Catholic Church – are both universalist, with little appreciation for what makes Italy a distinct nation. Naturally, both favor large-scale immigration, as expressed by Pope Francis‘ ardent statements. On May 27, for example, he called the presence of migrants “an invitation to recover some of those essential dimensions of our Christian existence.”

In addition to these lofty reasons, other Italians have more practical ones to want an unceasing flow of migrants. Italy’s Left cannot but notice how the migrant vote helps its counterparts in other countries (e.g., France). State-funded migrant services, which employed some 36,000 people, let go of 5,000 employees when the number of illegals dropped, with another 10,000 expected to be laid off. Corruption, including embezzlement and prostitution, is endemic to those services, with the Mafia making “vast profits off the backs of migrants.”

On the other side stand those who wish to celebrate not just the nation of Italy and its glorious national culture but also its many distinctive regions, with their long histories, mutually-unintelligible dialects, and renowned cuisines. Venice, for example, enjoyed independence through eleven centuries (697-1797), developed a unique method of glass-making (Murano), and has its own school of music composition. Civilizationist pride in this heritage stands in direct contrast to universalist attitudes.

The person of Matteo Salvini, 46, drives the civilizationist impulse to preserve. A career politician who joined the then-marginal Northern League at age 17, he became a Milan city councilor at 20 and rose through the party ranks, finally taking on and defeating the party’s long-time boss in 2013. As the new leader, he quickly turned a regional party into a national one (dropping “Northern” from the name) and made control of immigration his central message.

Salvini so dominates the League and drives Italy’s politics that the country’s future course depends in large part on his priorities, skills, depth, vision, and stamina. Should he succeed in turning the ports closure into a long-term solution to the problems of immigration and Islamization, his current electoral success presages a watershed for Italy. But if he fails in this attempt, Italians will not soon again have an opportunity to control their borders and assert their identity and sovereignty.

In larger terms, Italy has the potential to join Hungary in leading Europe out of its current decline; but this happy prospect requires enormous skill and more than a pinch of luck.

Daniel Pipes is president of the Middle East Forum.

3 thoughts on “Have Italians turned a corner in the battle to control their destiny?”