Islamophobia will not solve Europe or Asia’s problems

Neither Hungary nor Myanmar have a ‘Muslim population’ problem.

Hungary & Burma are trying to keep the Mohammedans out. Countries who allow them in have a growing problem.

“Islamophobia” is an insult. It suggests that all those who stand up for their culture & civilisation are afflicted with an irrational fear, a mental deficiency. But keeping Mohammedans out is an act of self-preservation, because we cannot coexist. 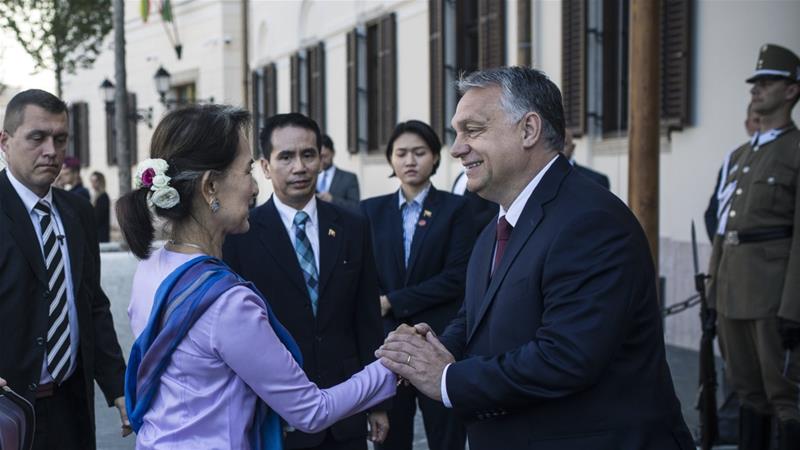 On June 5, during a rare trip abroad, Aung San Suu Kyi, state counsellor of Myanmar and Nobel Peace Prize laureate, visited Hungary and met Prime Minister Viktor Orban. After the meeting, the Hungarian government released an official statement, saying: “The two leaders highlighted that one of the greatest challenges at present for both countries and their respective regions – Southeast Asia and Europe – is migration. They noted that both regions have seen the emergence of the issue of coexistence with continuously growing Muslim populations.”

It is indeed strange that both Aung San Suu Kyi and Orban expressed concern over “growing Muslim populations” given that neither of their countries actually faces such a “problem”.

Any “growing Muslim population” is a problem for an infidel nation state.

Hungary has a tiny population of just over 5,000 Muslims and although over the past few years hundreds of thousands of mostly Muslim refugees have passed through its territory going west, few have expressed desire to stay and the government has refused to accept any.

Nothing “strange” about it at all. Both Burma & Hungary have been suffering from Moslem invasions. The insurgency continues, regardless.

Myanmar, too, does not have a “Muslim population growth” problem. In fact, over the past few decades, it has expelled hundreds of thousands of Muslims from Rakhine state, which for centuries has had a large Muslim community, despite the baseless claim by Burmese and Buddhist nationalists that Muslims are recent “migrants”.

Ibrahim lies. Mohammedans have not been in Rakhine state for “centuries”. Many have been brought in by the Brits, but most are recent illegal settlers, Bengali insurgents, engaged in replacing the natives. That’s what Mohammedans always do.

In spite of these realities on the ground and historical facts, both Aung San Suu Kyi and Orban have continued to insist that their countries are under threat by “Muslim migration”.

You can deny the facts, Ibrahim. But you can’t deny the consequences of denial. Our countries are under threat Muslim migration. Fact.

Long lauded as a proponent of human rights and civil liberties, Suu Kyi has stood up in defence of Myanmar’s military which has unleashed an unprecedented campaign of persecution against the Muslim-majority Rohingya. The systematic ethnic cleansing in Rakhine state, which has had a sizeable Muslim population since the 8th century, has resulted in the brutal killing of thousands of men, women and children and the displacement in 2016 of some 700,000 to neighbouring Bangladesh.

“Since the 8th century” is fanciful, even for an Islamo propagandist. Absurd!

Meanwhile, those who remain in Myanmar still face the threat of violence and various violations of their rights; over 100,000 are forced to live in camps where international visitors and the media are not allowed.

They are free to leave. They can go back to Bangladesh.

Within the Buddhist world, Aung San Suu Kyi has faced little backlash for her politics. In 2017, when asked about Myanmar’s brutal policies towards the Rohingya, the Dalai Lama, the spiritual leader of Buddhists, said that “they should remember, Buddha, in such circumstances, Buddha [would have] definitely helped those poor Muslims. So, still, I feel that [it’s] so very sad … so sad.” But since then, he has fallen silent on the issue even though the violence against the Rohingya has continued.

A “Rohingya” people don’t exist. They are a Moslem invention just like the “Palestinians”. The Burmese are savvy not to allow them to establish a jihad fiefdom within their nation.

At the same time, just as little is being done to stop the persecution of Muslim-majority Rohingya in Myanmar, not much has been done to address the root cause of the problem in Syria: the eight-year-long bloody civil war.

In 2015, eager to placate their angry electorates, European leaders pushed for a deal with Turkey to stem the flow of refugees into Europe, placing the burden on Turkish shoulders. The country currently hosts over 3.5 million Syrian refugees with very little help from the outside world.

Turning Europe into EUrabia was the idea. Ibrahim, a spokesturd for Turkey’s  despot Erdogan,  would like to see Europe to resettle them all.

Since then, Syrians have continued to be killed at an alarming rate in the conflict, with hundreds of thousands displaced internally, sometimes multiple times, and many still trying to flee to safety and dying in the cold waters of the Mediterranean Sea. Yet, the Europeans have shown little interest and leadership in ending the Syrian war, their primary concern remaining (Muslim) migration.

The Syrian war is a Moslem problem. It is not for Europeans to fix their problems. Let allah sort them out.

Of course, the biggest problem of both Myanmar and Hungary (and by extension Europe) is not Muslims per se.

But presenting them as a threat is a useful strategy to deflect attention from the real problems of social disintegration, economic stagnation, the rise of populism and far-right movements, the erosion of traditional values, the failure of mainstream politics and a host of other issues that have practically nothing to do with Muslim or other minority groups.

That doesn’t even make sense.  Without Mohammedan insurgents you don’t have a ‘rise of populism & far-right movements’. The problems Europe has today are entirely caused by  unassimilable Moslems & African savages.

Today there is concerted effort to instrumentalise Muslim communities within old-fashioned identity politics to stoke fear and justify conflict. Islam and Muslims are increasingly treated as the opposite of what both the secular and Judeo-Christian West supposedly stand for; they are the new common “enemy”. Thus, right-wing, left-wing, liberal, conservative, evangelical and other groups which normally argue over a thousand different issues on a daily basis, readily agree on this perceived Muslim “threat”.

Muhammad declared war on all mankind until all the people say “there is no god but allah & Mohammed is his prophet”. That’s what matters. Everything else is gaslighting, or taqiyya, if you prefer.

This, however, is a dangerous path to tread on. Islamophobia will solve neither Europe’s nor Asia’s problems. In the short term, it may serve narrow-minded populist agendas, but it in the long term, it could lead to more victimisation of minorities and ethnic and social upheaval.

Mohammedans are not victims. They treat their minorities like shiite. “Ethnic & social upheaval” sounds like a threat.

As American scholar Anne Norton has brilliantly argued, the “Jewish question” Karl Marx had identified in the 19th century has become the “Muslim question” in the 21st century. In both cases, the problem was never about Jews or Muslims, their values or ability to coexist in Europe, but rather about European capacity to accept them as equal citizens and partners in an increasingly interdependent and globalised world.

Mohammedans are not Jews.  Their values are not ours. We cannot coexist.

Some 150 years ago, Marx rightly said that the promise of freedom, equality and fraternity in Europe was dependent on the inclusion of Jews. Today, in Europe, Asia, and elsewhere, it is very much dependent on the acceptance of Muslims as equal human beings and fellow citizens.

Islam is not about freedom, equality and fraternity. We’re done with Marx a Mohammedan agitprops. 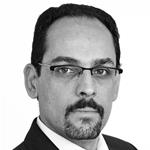 Ibrahim Kalin is the spokesturd for the Turkish presidency.