“Countering Violent Extremism” is obstructionist, obscurantist nonsense. We are dealing with a Moslem insurgency, and jihad warfare is only one part in their arsenal to destroy us. Trump is doing very well on the economic front, but when it comes to Islam he is sadly lacking. 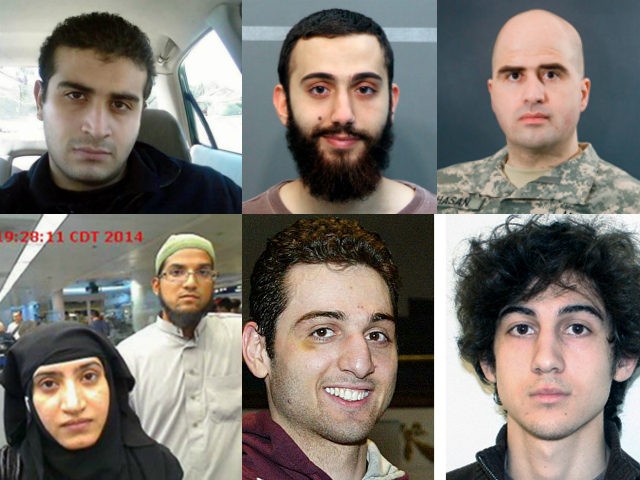 The GOP’s Obama endorsement is hidden in a new bill, titled the ‘‘Countering Terrorist Radicalization Act.” The showpiece bill’s title and language is undermined by numerous exceptions that allow the president to continue his failed “Countering Violent Extremism” strategy,  Gohmert said.

The bill is a post-Orlando showpiece that actually entrenches Obama’s harmful policies, he said. “All this is doing is giving more and more credibility to this ridiculous term ‘CVE’ instead of describing the killers that were behind 9/11, the Boston bombings, the San Bernardino attack, the Orlando shooting, the bomber in Times Square… all these people who are trying to kill us in America,” he said.

Continue reading below the fold.

Inadequate oversight for the U.S. taxpayer-funded $83 billion effort to develop the Afghan security forces has led to a waste of money and hindered the training and capabilities of the war-ravaged country’s troops, an American watchdog agency revealed this week.

There is nothing in Afghanistan worth $83 Billion.

It is idiotic to provide illiterate peasants with uniforms & modern weapons in the hope they will defend their shithole country against those who are willing to kill and die for allah.

The moment the U.S. pulls out, the Taliban will be in.

$83 billion to train Islamic savages, but no money to build the wall?

Stop! Please stop giving our enemies money! Stop acting as if they want peace and coexistence, that’s simply not the case.

Reuters reports: The Trump administration’s $50 billion Middle East economic plan calls for creation of a global investment fund to lift the Palestinian and neighboring Arab state economies, and construction of a $5 billion transportation corridor to connect the West Bank and Gaza, according to U.S. officials and documents reviewed by Reuters.

The “peace to prosperity” plan, set to be presented by President Donald Trump’s son-in-law Jared Kushner at an international conference in Bahrain next week, includes 179 infrastructure and business projects, according to the documents. The approach toward reviving the moribund Israeli-Palestinian peace process was criticized by the Palestinians on Saturday.

Who in his right mind believes that making these savages rich will make them love us?

It’s about jihad, you ignorant f*kcs!

Hussein Massawi, former leader of Hezbollah, summing up what Muslims want from the West: “We are not fighting so that you will offer us something. We are fighting to eliminate you.”

“We’re doing the same thing as the president… we’re not identifying radical Islam” as the enemy which nurtures and motivates attackers, Gohmert. “There is going to be more and more killings of Americans … until we can train our people to recognize radical Islam,” he said.

Under the CVE strategy, Obama has blocked FBI investigators from examining the supposedly non-political and peaceful networks of mosques that actually nurture jihadi attitudes, while redirecting FBI attention to less dangerous non-Islamic groups, such as small-government militias. The strategy has also put FBI agents under the supervision of an oversight panel influenced by Muslim political activists, including an immigrant who reportedly welcomed the slaughter of 3,000 Americans in 2001 by her Muslim co-religionists.

Moreover, Obama’s tight restrictions on investigators have not earned the expected cooperation from Islamic groups. In fact, many self-segregating Islamic groups have rejected Obama’s proposal to allow local Imams to police their young men in exchange for sharing information about jihadi groups with the FBI.

The GOP endorsement bill is slated for a vote as early as Thursday, June 16.

Under a subtitle, “AMPLIFYING LOCAL EFFORTS TO ROOT OUT TERROR,” the bill simply authorizes extra training, the creation of a committee and establishes some conditional reporting requirements, according to the draft given to Breitbart. The bill does not reform Obama’s CVE strategy, training rules or investigative priorities.

The bill was drafted by staff working for Rep. Michael McCaul,  R-Texas, who is the chairman of the House Committee on Homeland Security.  Press aides at the committee declined to comment on the bill, or even if the committee plans to hold oversight hearing on Obama’s failed CVE strategy in the run-up to the 2016 election.

“The effective thing is … effective outreach to the Muslim community, so you can pull the religious leaders really on to our team, if you will, to protect us from radicalization from within those communities,” he said March 27. “I think we can get good intelligence from the Muslim communities in our outreach efforts, in our working with the religious leaders in the communities in the United States,” he said.

In contrast, federal prosecutors do not offer political favors to let the Catholic priests run law-enforcement tasks in Latino neighborhoods, for example, keeping track of MS-13 and various drug-gangs. In practice, much of that hoped-for intelligence about emerging jihadis has been blocked by determined opposition from Islamist advocates. For example, Linda Sarsour, a prominent Islamic advocate who is called a “Champion of Change” by Obama’s deputies, is a strong opponent of the information exchange.

One thought on ““We’re not identifying radical Islam””