Rap Sheet: Racist Statements by the ‘Squad’ (So Far) 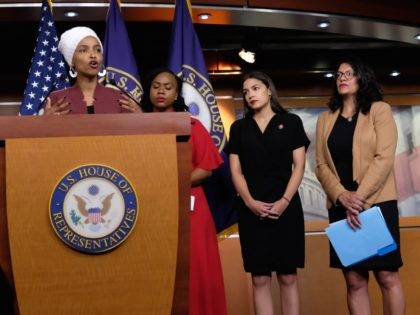 The “Justice Democrats” are devoted to a specifically racial mission. Moreover, the four members of the “Squad” have a history of racist statements. MSNBC star Rachel Maddow thanks Omar for the "honor" of a syrupy, softball interview. Oh, our hero, you are so incredibly stressed by the haters like Trump….. https://t.co/7n2s1PBWbe

Be a shame if this went viral pic.twitter.com/LXAoASl2AS

#Breaking
This is NOT a group of women in #Gaza getting ready for a child's birthday. They are getting balloons ready to carry incendiary bombs and explosive materials to send over the border into #Israel! #ReligionOfHate pic.twitter.com/TgEOqunXBf

Moslems owned far more slaves than whites ever did.

I honestly think this might be the most insane tweet I’ve ever seen. And I’ve seen almost all of AOC’s… pic.twitter.com/Te297afwBf