‘It will legalise child brides and polygamy’: Pauline Hanson says proposed religious discrimination laws will be exploited by Muslim extremists

The One Nation leader has voiced her fears as Prime Minister Scott Morrison‘s government plans to introduce legislation making it illegal to discriminate against someone based on their religious beliefs.

‘I am concerned that such a bill could be used by radical Islamic extremists as a shield to protect the worst aspects of their political ideology,’ the Queensland senator told her 278,000 Facebook followers on Tuesday night. 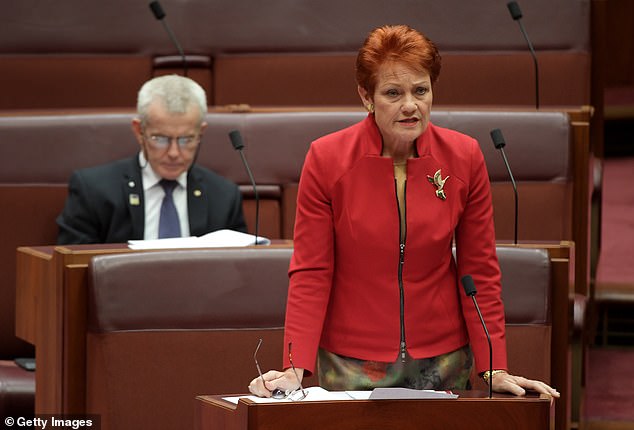 ‘By forcing this through without scrutiny the government may be creating a pathway for extremists to practice polygamy, genital mutilation, or even under-aged marriage and this cannot be allowed to happen.

‘We must always be on guard for the unintended consequences of good intentions.’

Section 116 of the Constitution already bans the federal government from ‘imposing any religious observance, or for prohibiting the free exercise of any religion’.

It also says there shall be ‘no religious test’ to hold a Commonwealth position. 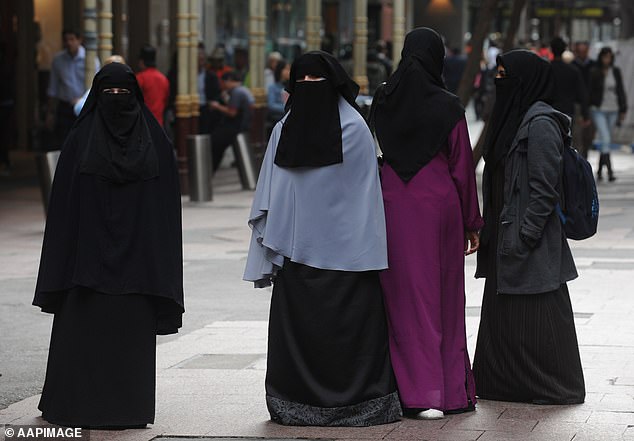 That aspect of the Constitution, however, doesn’t cover private sector employment.

Senator Hanson accused the government of failing to properly explain the details of its proposed legislation.

‘Many people, including myself, are concerned about the rights of Australians who practice a legitimate religious faith,’ she said.

‘But what do we do when a belief clashes with the laws and customs of our land?

‘The government wants to force a bill through parliament they say is aimed at protecting religious freedom but have failed to give any details of the bill.’

The Labor Opposition is expected to back the government’s religious discrimination legislation, after suffering at the May election strong swings against it across south-west Sydney, where a swathe of electorates voted against gay marriage in a 2017 postal vote survey.

Attorney-General Christian Porter last week held a workshop for Coalition MPs to explain the bill, with more sessions to follow for other backbenchers.

The draft laws are likely to come under scrutiny from a parliamentary committee, making it unlikely religious freedom protections will pass the Parliament until at least late this year.

Senate Hanson is opposed to Muslim immigration and in August 2017 wore a burqa into the Senate to demonstrate her case for banning full facial coverings in public. 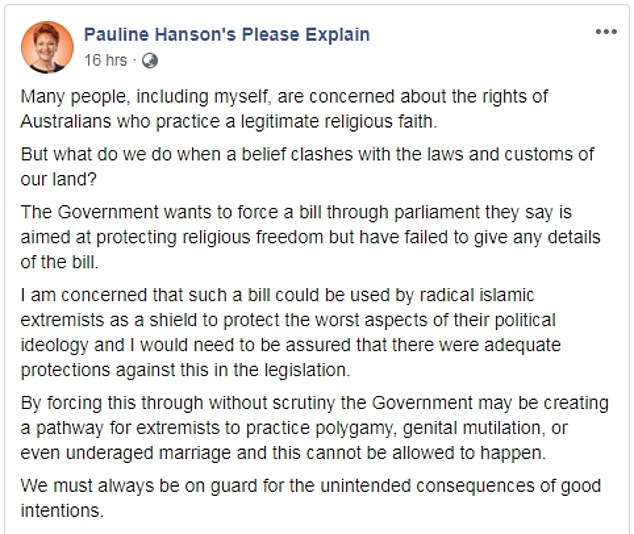 Senator Hanson accused the government of failing to properly explain the details of its proposed legislation, arguing a badly drafted legislation to ban religious discrimination could legalise child brides, female genital mutilation and polygamy (pictured is her Facebook post from Tuesday night)