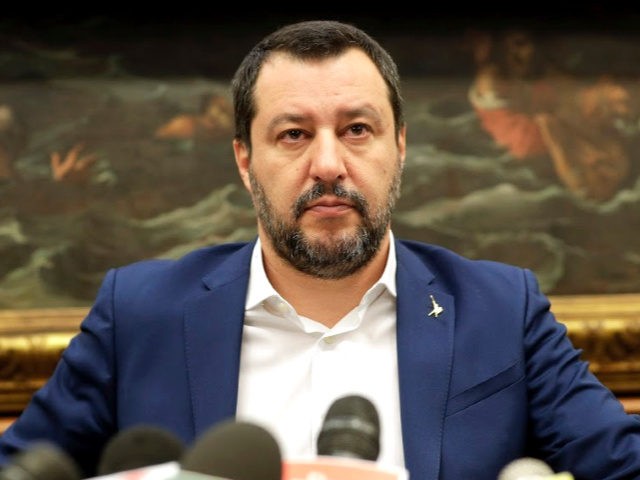 Mediterranea’s Italian-flagged Alex with 41 migrants on board was on Saturday joined by German charity Sea-Eye’s vessel Alan Kurdi, carrying 65 migrants collected off Libya.

Italian populist Salvini last month issued a decree that would bring fines of up to 50,000 euros ($57,000) for the captain, owner and operator of a vessel “entering Italian territorial waters without authorisation”.

“We are waiting in international waters off the island of Lampedusa,” Sea-Eye tweeted from the Alan Kurdi.

“The Guardia di Finanza came by in person to deliver Salvini´s decree: The port is closed,” it said, referring to customs officers.

German interior minister Horst Seehofer tweeted that Germany was ready to take in some of those on board “as part of a European-solidarity solution.”

Sea-Eye said the 64 men and one woman were picked up from an overloaded blue dinghy lacking sufficient drinking water, and there was no satellite phone or navigation aid on board.

Salvini accuses NGO vessels of helping smugglers and said the other vessel, Alex, should sail for the Maltese capital Valetta after 13 “vulnerable” people were on Friday taken to Lampedusa, leaving 41 on board.

Valletta has also told the Alex to go to Maltese waters to disembark the migrants, but Mediterranea says the journey would be too arduous.

Photographs showed dozens of migrants and asylum seekers seeking shelter from the sun under survival blankets on the narrow deck of the 18-metre (59-foot) sailboat.

“In these conditions it is impossible to face 15 hours of sailing. We are waiting for Italian or Maltese naval arrangements to take these people on board,” Mediterranea’s Alessandra Sciurba said on Twitter.

She said that while Italy had taken families and pregnant women from the small vessel, “all non-accompanied minors remain on board, including an 11-year-old.”

Mediterranea consists mainly of left-wing activists, the avowed enemy of Salvini, who has seen his popularity and that of his Lega party rise thanks to his tough stance against migrant transports.

Italian authorities on Lampedusa last week seized a vessel belonging to German aid group Sea-Watch and arrested its captain, Carola Rackete, for unauthorised entry to port with dozens of migrants on board.

An Italian judge this week ordered her freed, a decision which also sparked Salvini’s ire.

Two other investigations, on charges of helping people-smugglers and resisting the authorities are still underway after she forced her way past Italian customs vessels.

Salvini on Saturday repeated his call for reform of the European Union’s Dublin rules, which stipulate that asylum requests be handled by the country where they first arrive.

“It doesn’t seem that the majority of European countries want to do it,” said Salvini, vowing to change rules he says place an unfair burden on Italy.

“We want to overcome rules that don’t work,” he told journalists in Milan.

Despite Salvini’s apparent firmness about closing Italian ports to migrants, dozens of migrants and asylum seekers continue to arrive in Italy by other means, some rescued by Italian authorities.

Interior ministry figures showed 191 had arrived by sea over the last week.

Here’s what happens in Europe when one of the people smuggling captains is arrested: The Italians arrested a captain just the other day for ignoring directions from a war ship and for ramming and badly damaging a harbour patrol vessel. This captain had 45 illegal immigrants on her ship.

A judge immediately released her without charge. The judge actually complimented her and then let her go. And of course the 45 illegals are living at the Italians taxpayers’ expense whilst they plan the setting up of drug dealing businesses and the rape of white Europeans.

Western Europe can latch onto their so-called populist politicians all they like, but they’re only clutching at straws like drowning men. It’s gone too far, Western Europe won’t be saved without an armed uprising.