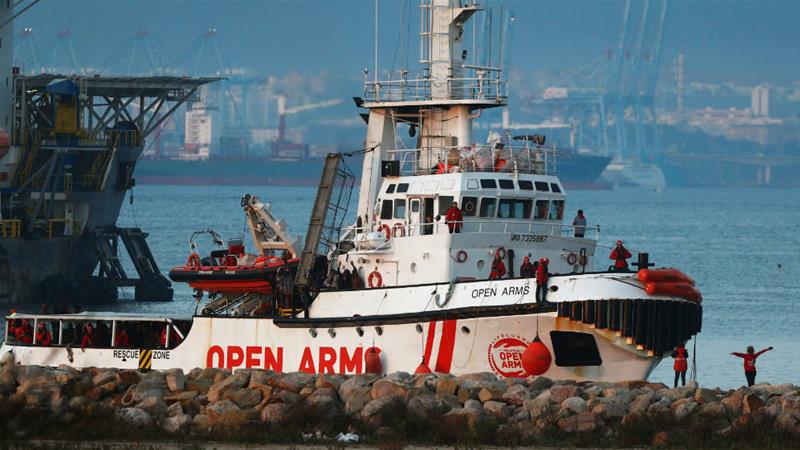 In this file photo from 2018, the Proactiva Open Arms rescue boat is seen docked at the Center for Temporary Assistance to Foreigners (CATE) in the port of Algeciras, in Campamento, Spain

More than 500 refugees welfare seekers are stuck in the Mediterranean Sea on two NGO boats, as Italy and Malta continue to deny them access to their ports.

French charity group Doctors Without Borders (MSF) said late on Monday it had completed “a critical rescue” of another 105 people onto the Ocean Viking, raising the total number of migrants on board that ship to 356.

At least another 150 people remain on board the Spanish charity vessel, the Proactiva Open Arms.

Italy’s far-right interior minister and deputy prime minister, Matteo Salvini, on Tuesday reiterated his intent on making sure the two ships do not enter Italian ports.

“I am at work in the ministry this morning to prevent more than 500 migrants from disembarking from two NGO boats, one French and one Spanish,” Salvini wrote on Facebook.

“I will let you know how this ends. I will not give up.”

Italian lawmakers passed legislation that threatens the arrest of captains and crews of rescue boats entering Italian waters. Fines of up to one million euros ($1.1m) and the impounding of the boat are also possible under the new law.

Senators called back from holiday as Italian crisis deepens

Salvini’s crackdown on people smugglers has buoyed his domestic popularity as he attempts to trigger snap elections and seize power for his far-right League party.

Salvini said Libya had offered to take back the rescued people, though MSF ruled out returning its passengers to the war-torn country, saying migrants and refugees were routinely tortured and abused there.

Africa belongs to the Africans. Keep them there!

Open Arms, the Spanish charity, has called for the European Union to coordinate the re-distribution of the people around the bloc.

“To leave people who have fled war and violence in Libya on the high seas in this weather would be to inflict suffering upon suffering,” said Vincent Cochetel, UNHCR special envoy for the central Mediterranean.

“They must be immediately allowed to dock, and allowed to receive much-needed humanitarian aid.”

Spain said Italy should deal with the ships.

“International law states that a rescue takes place in the closest safe port. Without doubt, right now that means Italy. If it was us, we would do it,” Jose Luis Abalos, Spain’s acting development minister, told Telecinco television on Tuesday.

Ferry services are not rescuing. There’s a difference.

However, he also said an asylum request made on behalf of the 31 Eritrean children on board the Open Arms ship carried no legal weight, with captain Marc Reig not having the authority to request asylum for the children.

Italy has taken in more than 600,000 boat-bound rescued people since 2014, but new arrivals have fallen sharply over the past two years, with the decline accelerating in recent months.

One thought on “Al Jizzeera promotes the invasion of Europe”