Forbes magazine has appealed for recognition of the phenomenon of Christian persecution around the globe as a crisis demanding focused attention.

Report after report “has been raising the issues that relate to the persecution of Christians globally,” notes Forbes contributor Ewelina U. Ochab, which includes “atrocities that amount to genocide and crimes against humanity.”

“Repent, infidel. Convert and save yourself!”

“Those who buy into a fantasy view of Islam are in for a rude surprise when they encounter the real thing”.

Pope Francis, ‘The Song of Roland’ and Imam Al-Tayeb

In many Muslim-majority countries, the Christian clergy are regularly being murdered by devout Mohammedans. 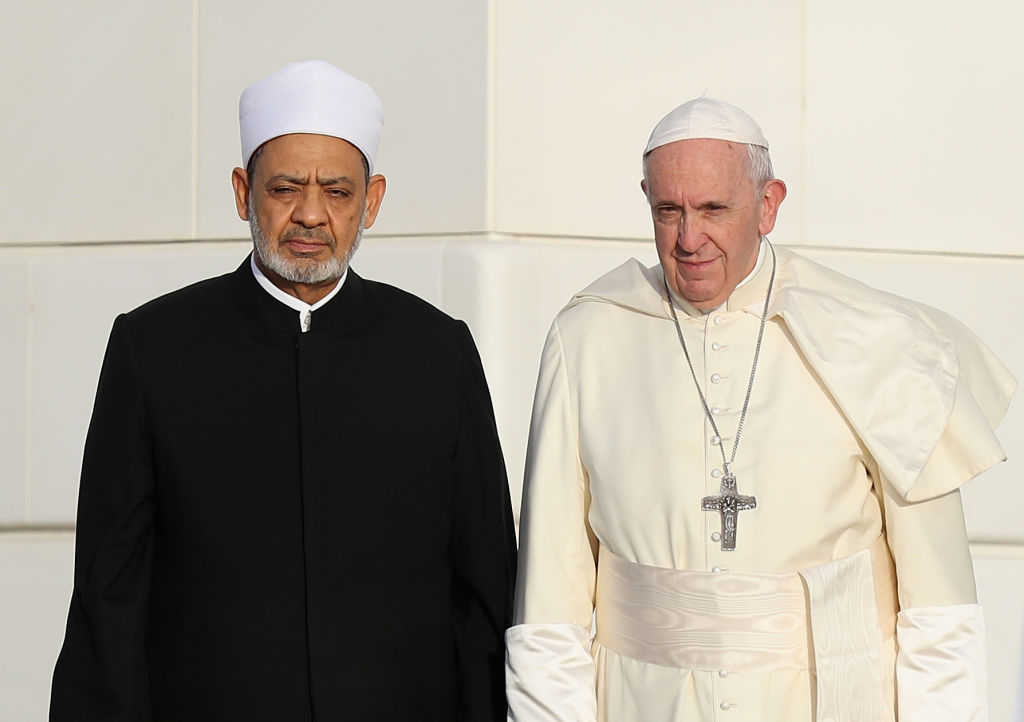 The West and its religious leaders need to stop repenting and face reality. For the Pope, the head of more than a billion Catholics, it means using his dialogue with Islam to challenge it and ask its leaders, such as Al-Tayeb, to stop threatening Christians. Now, please, in 2019, not in 1209, at the time of the “Song of Roland”.

Recalling a scene from the famous 11th-century poem “The Song of Roland”, in which Christians in Spain threatened Muslims “to choose between baptism or death”, Pope Francis recently said, “We must beware of fundamentalist groups; each (religion) has their own. Fundamentalism is a plague and all religions have some fundamentalist first cousin”. A few days before that, Pope Francis receivedthe Grand Imam of Al-Azhar, Ahmed Al-Tayeb.

In the first incident, the head of the Catholic Church criticized Christians for converting Muslims ten centuries ago, and implied that every religion has its own faults. In the second incident, the Pope met a religious leader who still threatens death to Muslims who convert to Christianity. “Apostasy is a crime,” Imam Al-Tayeb has explained; “an apostate should be asked to repent, and if he does not he should be killed”. At least the Egyptian religious leader was up front about it: in the Middle East and North Africa, 14 of the region’s 20 countries criminalize apostasy. In addition, Afghanistan, Iran, Malaysia, Maldives, Mauritania, Nigeria, Pakistan, Qatar, Saudi Arabia, Somalia, Sudan, United Arab Emirates and Yemen — all Islamic countries — recommend the death penalty for “atheism“. In Algeria, Muslims who convert to Christianity are being persecuted to this day.

“The astonishing ignorance of these basic teachings [about Islam] on the part of Pope Francis and his advisors doesn’t make for a more harmonious world: it makes for a more dangerous one”, wrote William Kilpatrick in the US magazine Crisis. “Those who buy into their fantasy view of Islam are in for a rude surprise when they encounter the real thing”.

The regrettable fact is that in many Muslim-majority countries, the Christian clergy are regularly being murdered by extremists. Just recently, three Christian clergymen have been slaughtered. Pastor David Mokoni was killed by Boko Haram during an attack on his church in Cameroon. A South Korean evangelical pastor, Jinwook Kim, was murdered in Turkey. And a Catholic priest, Housib Petoyan, who belonged to Syria’s Armenian minority, was murdered by the Islamic State. According a new report by Aid to the Church in Need, “over 245 million Christians [are] living in places where they experience high levels of persecution,” 4,305 Christians were killed for their faith from 2017 to 2019, and 1,847 churches and other Christian buildings were attacked in the same period. The report states that “within a generation, Iraq’s Christian population has shrunk by more than 90 percent.”

Christians in Burkina Faso are now being forced to “flee, convert or die“. In Nigeria, Boko Haram is holding a student, Leah Sharibu, captive for her refusal to convert to Islam. British Baroness Cox recently discovered, on a fact-finding mission to Nigeria, mass murders of Christians by Muslim extremists (more than 1,000 Christians killed since January and more than 6,000 since 2015). In Mosul, Iraq, when Christians were faced the choice of conversion to Islam, fines or death; they fled their historic city. “I have a family of Christians who do not want to convert, what do we do with them?”, a jihadist in Iraq asked his superior.

The French magazine Le Point in November 2016 told of the ordeal of one Iraqi Christian family:

Ismail Matti was 14 years old when IS entered his town of Bartalla, east of Mosul. He was waiting for relatives to flee with his sick mother, Jandar Nasi, but no one came.

So they tried to leave but were turned away twice by jihadists, who put them in prison in Mosul.

“There were a lot of Shiites in the cell next to ours, they took one, shot him in the head and shot his body in front of us,” he says.

“They warned my mother that the same fate was waiting for us if we refused to convert, so we converted,” recalls Ismail, now hosted in a church-run shelter in Erbil, the capital of Iraqi Kurdistan.

In Egypt, the country of Imam Al-Tayeb, lived a Coptic Christian named Bahgat Zakhar. “Repent, infidel. Convert and save yourself”, one of the jihadists threatened him, pressing the gun to Zakhar’s head and forcing him to his knees. Zakhar shook his head so they shot him.

The same violence has taken place throughout Syria. “One Friday trucks appeared in the village with heavily armed and bearded strangers who did not know anyone in the village,” the human rights lawyer Nina Shea wrote in 2014, quoting the Dutch journalist Martin Janssen:

“They began to drive through the village with a loud speaker broadcasting the message that their village was now part of an Islamic emirate and Muslim women were henceforth to dress in accordance with the provisions of the Islamic sharia. Christians were given four choices. They could convert to Islam and renounce their ‘idolatry.’ If they refused they were allowed to remain on condition that they pay the jizya. This is a special tax that non-Muslims under Islamic law must pay for ‘protection.’ For Christians who refused there remained two choices: they could leave behind all their property or they would be slain. The word that was used for the latter in Arabic (dhabaha) refers to the ritual slaughter of sacrificial animals.”

When ISIS took the Assyrian villages in Syria’s Khabur Valley in 2015, “everyone asked us to convert to Islam”, a Christian witness recounted. In the Syrian Christian town of Maaloula, Islamic terrorists executed — in front of their parents — three Greek Catholic Christians who refused to convert to Islam. “They shot Michel, his nephew Sarkis and his cousin Antoine”, Marc Fromager, director of “Aid to the Church in Need” in France, disclosed.

Meriam Yahya Ibrahim, who now lives in New Hampshire with her family, was pregnant when she was arrested in Sudan in 2013 and later sentenced to death, for refusing to renounce her Christian faith.

An Iraqi Christian, Adel, with his wife Fidaa and their three children, were captured by an ISIS “emir”:

“He entered the women’s barracks, he took out his sword and put it on my daughter’s throat: ‘convert’, he ordered my wife, otherwise I beheaded her'”, Adel recalled. “Fidaa agreed to convert, and instead of killing her, the emir decides to marry the daughter. The mother protested that the girl was only 8 years old. The Islamists threatened to rape the girl on the spot. Adel jumped up: ‘I told them that I wanted to convert and keep my family'”.

The odyssey of Iraqi Christians is full of these testimonies.

In Egypt, Christian girls have been forced to convert to Islam and marry Muslims.

Not only Christians are converted, but also their holy sites. The Umayyad Mosque in Damascus, visited by Pope John Paul II, had been a Christian church before being converted to a mosque. In Cyprus, “In the span of three decades under Turkish control, more than 530 churches and monasteries have been pillaged, vandalized, or destroyed in the northern area…”

Turkey’s President Tayyip Erdogan himself has called to convert — again — Hagia Sophia into a mosque. Hagia Sophia was the foremost cathedral in Christendom for 900 years before becoming one of Islam’s greatest mosques for 500 years until 1935, when it was converted to a museum. The Great Mosque of Aleppo was once the Cathedral of Saint Helena.

This tragedy is not even new. “Before the Crusades, Muslims compelled Christians in the Middle East and Africa to convert, be slaughtered or accept a second-class existence”, the journalist Melanie Phillips noted in The Times.

“Religious liberty, the core value of western civilisation, is being destroyed across large parts of the world. Yet the West, myopically denying this religious war, is averting its gaze from the destruction of its foundational creed in the Middle East and the attempt to eradicate it elsewhere. It is therefore no surprise that, faced with jihadist barbarities abroad and cultural inroads at home, the free world is proving so ineffectual”.

The persecution of Christians in Islamic lands is an open secret. Hunted, enslaved, forcibly converted as a group to Islam, killed for their religion and their property, their places of worship destroyed: in many countries, this is their reality. They are simply meeting the same fate as their ancestors. According to Professor Philip Jenkins, in his book, The Lost History of Christianity:

“In the Sixth century, there were more than 500 bishops, successors of church fathers such as Cyprian of Carthage and Augustine of Hippo, ministering in what today are Libya, Algeria, and Tunisia; barely two centuries later not one was left, their churches having vanished in the face of the Muslim invasion”.

Christianity has lost most of its ancient cradle. The French orientalist Jean-Paul Roux wrote:

“The Muslim world was created on lands that were Mazdean or Buddhist, such as Iran and India, but even more so on Christian lands, Asia Minor, Syria and Palestine, Egypt and Nubia, North Africa, and has converted them in whole or in large part”.

Of all these areas, Christians have been able to take back from Islam only Sicily, Spain and Crimea. There is not one single Muslim country converted by force to Christianity and never reclaimed by Islam. The opposite has happened in dozens of cases.

Pope Francis is probably right that ten centuries ago, Christians converted Muslims to their faith. Twenty years ago, Pope John Paul II already apologized for the Church’s past. The West and its religious leaders need to stop repenting and face reality. For the Pope, the head of more than a billion Catholics, it means using his dialogue with Islam to challenge it and ask its leaders, such as Al-Tayeb, to stop threatening Christians. Now, please, in 2019, not in 1209, at the time of the “Song of Roland”.