According to reports by local media, four armed attackers stormed the Pakistan Stock Exchange in Karachi on Monday morning and were killed during a shoot-out with authorities. At least three others were also killed, including a police officer and two security guards.

The only media person talking about the new persecution of the Jews in France was Katie Hopkins. She’s been bumped off Twitter.

BLM & Antifa have allied with Islam because it is a militant ideology, & Jew-hatred comes along with that as Islam is inherently antisemitic.

That means the US gov’t is complicit in that it denies the jihad threat,  it deflects & obscures the jihad to blame some imaginary “Right-Wingers”, who are not known to mass-murder, to behead, stab or shoot people or fly jets into buildings. In other words, your gov’t is gaslighting you.

If the Allahu-akbaring rioters weren’t stopped from drinking by Islam’s ban on alcohol, why do German authorities think a ban by secular authorities that the rioters don’t respect will work?

With a seemingly strange proposal, German authorities now want to prevent the devastation of the weekend from being repeated: a ban on alcohol in downtown Stuttgart is to fix it.

‘We fight now, or lose America to violent communism’ Nick Buckley who has helped thousands of disadvantaged youngsters, has been sacked after criticising the far-Left political agenda of the Black Lives Matter campaign

In reality, there is a far greater demand for “right-wing extremism” than there is a supply, in order to justify the favored narrative of the political and media elites. As the British Colonel Richard Kemp said recently: “The authorities know full well that the far-right extremism is not a major threat in the UK.” The same thing is true in the US. Kemp’s explanation for this also applies to the US: “The reason that it is often spoken about and discussed is that is because it’s a way of appeasing the sort of people that do want to damage the UK, like Islamic terrorists and to a lesser extent the hard left. Obviously we have seen far-right people doing some terrible things, but it’s not any way comparable to Islamic jihad or similar to that. There is a pretence put up that it is. The authorities know it isn’t and I am concerned that because they have this narrative in Government far-right extremism is a danger resources are diverted to it when they shouldn’t be.”

The Center for Strategic and International Studies (CSIS), which is responsible for this spurious study, in 2018 warned that the US would never defeat jihadis without giving them vast amounts of money and political power 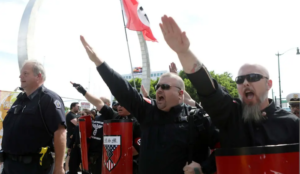 Far-right extremism is by far the most common ideology behind terrorist incidents in the United States, according to a new analysis

In a report released last week, the Center for Strategic and International Studies (CSIS) analyzed 25 years of domestic terrorism incidents, finding that “right-wing attacks and plots account for the majority of all terrorist incidents in the United States since 1994,” outpacing terrorist acts by all other sources such as “far-left networks and individuals inspired by the Islamic State and al-Qaeda.”

Furthermore, the report found that occurrences of these right-wing attacks have since grown significantly in the past six years, with far-right extremists perpetrating two-thirds of attacks and plots in 2019, and 90 per cent of all incidents between Jan. 1 and May 8 in 2020.

“One of the most concerning is the 2020 U.S. presidential election, before and after which extremists may resort to violence, depending on the outcome of the election,” the report stated….

A new study from London-based Institute for Strategic Dialogue also found over 6,600 right-wing extremist channels, pages and accounts on social media linked to Canadians. Researchers there said that over 11 million users were reached around the globe via social media platforms from Facebook to Twitter, as well as on fringe social media sites like Gab.

“Canada has a well-established online ecosystem of right-wing extremists who are advancing hatred towards minority groups, who are targeting people who are ultimately trying to make Canada a more divided place,” said Jacob Davey, the lead author on the ISD study.

The findings have since helped identify the part those platforms play in proliferating hate speech and extreme ideologies online, as well as how right-wing extremism in Canada mobilizes or recruits new members.

The U.S. does not yet have a domestic terrorism law place, preventing domestic extremist groups from being designated as terrorist organizations.

The debate on implementing such a law has raised criticism from several sides of the political spectrum regarding how it could be enforced, as well as on the implications it might have on the nation’s First Amendment law — the right to free speech.

“All parts of U.S. society have an important role to play in countering terrorism. Politicians need to encourage greater civility and refrain from incendiary language. Social media companies need to continue sustained efforts to fight hatred and terrorism on their platforms,” reads the closing section of the CSIS report.

“But the struggle will only get more difficult as the United States approaches the November 2020 presidential election — and even in its aftermath. Finally, the U.S. population needs to be more alert to disinformation, double-check their sources of information, and curb incendiary language.”