Humbug.  Everything is wrong about this header. It’s not about “the world”- it’s the civilised world that is overrun by Mohammedan welfare seekers, not the third world or the rest of the world. The rich Arabs are not accommodating any of their coreligionists. The word “migrant” in itself is a fraud. There is only legal & illegal immigration. A “migrant” as such doesn’t exist. And no Mohammedans is a refugee or asylum seeker. Each & every one of them is a soldier of allah. 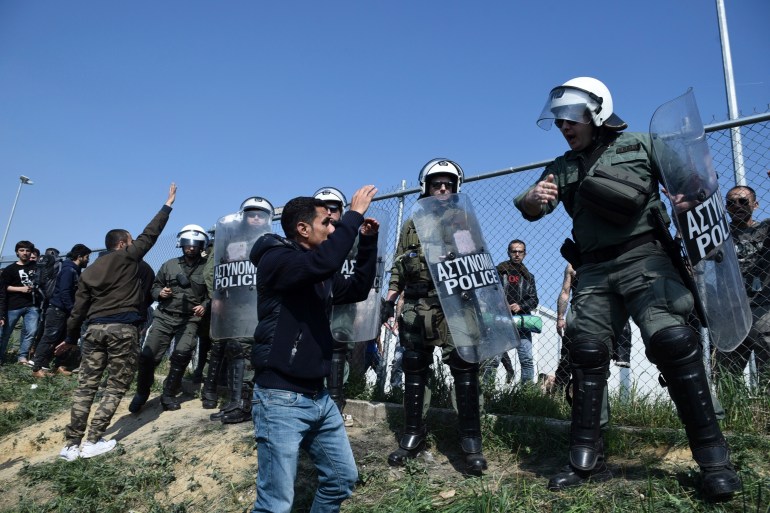 Protesting refugees and migrants gather as riot police guard a refugee camp in the village of Diavata, west of Thessaloniki in northern Greece [Giannis Papanikos/AP]

The world is becoming less tolerant of migrants, according to a poll released on Wednesday as Europe prepared to unveil a new asylum plan in the wake of a blaze at an overcrowded camp in Greece that left thousands without shelter.

They’re doing the right thing. The rest of Europe has lost their f*kcing minds.

But the sharpest changes in attitude were in Peru, Ecuador and Colombia, which have seen an influx of Venezuelans fleeing turmoil at home.

Canada was the most welcoming country, followed by Iceland and New Zealand, according to the index based on more than 140,000 interviews in 145 countries and regions.

The poll asked people their views about having migrants living in their country, becoming their neighbours and marrying into their families.

Index scores ranged from 1.49 in North Macedonia to 8.46 in Canada, just below the maximum possible score of 9.

Gallup migration expert Julie Ray said the slight global fall in acceptance – 5.21 in 2019 down from 5.34 in 2016 – was driven by marked changes in Latin American countries.

Peru’s score tumbled to 3.61 from 6.33 in 2016, while the number of Colombians who said migrants living in their country was a good thing dropped to 29 percent from 61 percent.

One thought on “Is the world becoming less tolerant of migrants?”