Will media cry about their violent demonstration during Corona? (We're being scammed)

Thousands protest in Pakistan over reprinting of Mohammad cartoons in France 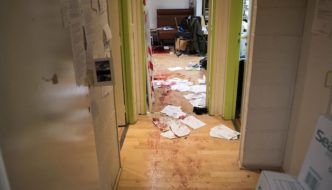 Because according to Islamic law, every Mohammedan is judge & executioner for the religion. Freedom in France, Mr Macron said, includes “the freedom to believe or not to believe.

“But this is inseparable from the freedom of expression up to the right to blasphemy.”

One thought on “Koran Rage & the right to blaspheme”