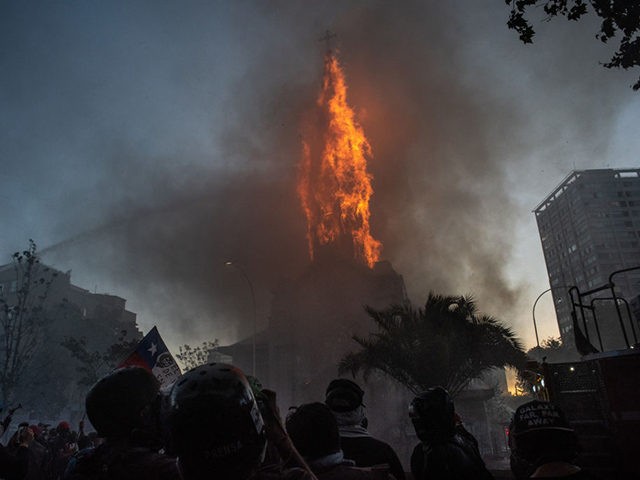 Local reports identified the two churches as the institutional church of Chile’s national police force, the Carabineros: San Francisco de Borja, and the Church of the Ascension, one of the oldest in the country, both near the hub of leftist mass assemblies against the current constitution. Supermarkets and other businesses that suffered vandalism and looting were in the same neighborhood.

Chilean leftists — reportedly with the help of terrorists from Cuba, Venezuela, and other neighboring socialist states — began rioting in October 2019 in response to an announced hike in subway fares in Santiago. The riots resulted in the burning down of several subway stations, significantly hindering business and transportation in the capital.

Center-right President Sebastián Piñera responded to the protests by yielding and suspending the fare hike, triggering a demand from leftists to scrap the constitution and more riots. Rioters burned and vandalized several churches last year. Chile’s population is estimated to be about 67 percent Catholic and 84 percent Christian, including other denominations.

The Chilean constitution does not address subway fares and the Catholic Church has no official position on the matter.

The protesters demand a new constitution because the current one took effect in 1980 under General Augusto Pinochet. Lawmakers have significantly amended the constitution since, however, particularly after Pinochet called for elections in 1989 to significantly upgrade and democratize the document.

Chileans will vote on October 25 to choose if they will enact a new constitution.

While many outlets reported that Sunday’s assemblies were “festive,” attracting tens of thousands of people, masked thugs reportedly attacked San Francisco de Borja around 4:00 p.m. local time, far from dusk, and built up barricades around it before burning it down. Footage broadcast on Chilean news networks showed widespread destruction inside the building.

The attack on the Church of the Ascension occurred later, reportedly at around 7:30 p.m. The church, built in 1876, burned down completely, its spire dramatically collapsing on camera.

The San Francisco de Borja church already suffered an attack in January; the Church of the Ascension was attacked in November.

Chile’s T13 network broadcast dramatic images of the churches burning, as well as bonfires set up outside the church to burn stolen paraphernalia from inside. Some masked thugs appeared to have stolen a statue from within one of the churches, so damaged as to be unrecognizable, and took pictures next to it, smiling and pointing at it.

The T13 footage also showed barricades spray-painted with Spanish-language protest slogans. One barricade appeared to read “without God” and “ACAB,” an English-language abbreviation meaning “all cops are bastards” that, according to the Anti-Defamation League, “is a slogan of long standing in the skinhead subculture.” Its presence is a mirror image to the surfacing of a flag of the Mapuche indigenous people of Chile in the United States during riots that following the death of Minnesota man George Floyd.

Chilean news outlets reported at least five arrests in relation to the church arson incidents. Motivation for the attacks has become a subject of debate online, as some on the left have speculated that the violence is meant to derail the anti-constitution movement.

Piñera has yet to make public remarks on the riots at press time. Many, including allies in the government, have condemned the relative lack of action on the part of the federal government.

The mayor of Santiago, Felipe Alessandri, was first in line to condemn the federal government on Monday, though he did not personally name Piñera.

“I am surprised that the state of Chile [the federal government] was not capable of containing the violence. There was a lack of action,” Alessandri told reporters. “I extend my solidarity to the carabineros [federal police] for the big hit [they took], but what happened with the state?”

“I want to tell the state to protect Santiago, its neighborhoods, its businesspeople, its neighbors, because we will not allow this to become a sacrificial zone,” he added. “We ask for a more active role.”

The church burnings have prompted some concern that Chile will return to the state of leftist violence it experienced last year. In December 2019, René Barba, a councilman in Lo Barnochea, a Santiago suburb, told Breitbart News the government estimated that leftist had destroyed “70 subway stations, 140 supermarkets, practically all pharmacies, in three days … a week ago they burned 120 churches and destroyed all the iconography.” Barba said at the time that officials had seen evidence of organized violence, including leftists offering food, alcohol, and presumably drugs to individuals prior to the riots.

Chile was going the way of Venezuela when Pinochet stepped in. He crushed the leftists and restored Chile to a democratic prosperous nation. Then the progressives in the US and the UN tried him for crimes against humanity.