Dystopian “Great Reset”: “Own Nothing and Be Happy”, Being Human in 2030

In a short video below, the WEF predicts that by 2030, “You’ll own nothing and you’ll be happy.” A happy smiling face is depicted while a drone delivers a product to a household, no doubt ordered online and packaged by a robot in a giant Amazon warehouse: ‘no humans were involved in manufacturing, packaging or delivering this product’; rest assured, it is virus- and bacteria-free – because even in 2030, they will need to keep the fear narrative alive and well to maintain full-spectrum dominance over the population.

The jobless (and there will be many) could be placed on some kind of universal basic incomeand have their debts (indebtedness and bankruptcy on a massive scale is the deliberate result of lockdowns and restrictions) written off in return for handing their assets to the state or more precisely the financial institutions helping to drive this great reset. The WEF says the public will ‘rent’ everything they require: stripping the right of ownership under the guise of ‘sustainable consumption’ and ‘saving the planet’. Of course, the tiny elite who rolled out this great reset will own everything.

‘Build back Better’ is another slogan politicians use instead of ‘The Great Reset’.
Joe Biden, Justin Trudeau, Boris Johnson are all using the same phrase as if directed by some global governing body.
And now, right on cue, our weak Prime Minister Scott Morrison says “This is about communities Build Back Better”.
Our democracy has been hijacked. 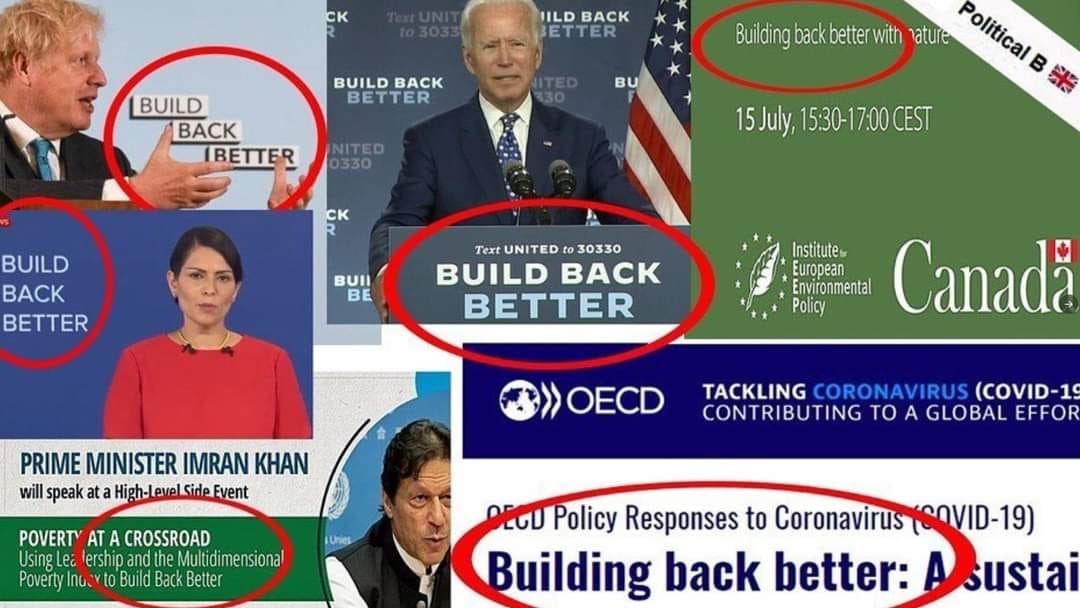 What is the Great Reset?

Ben Sixsmith The Spectator Australia 18 November 2020
.
The phrase has shot throughout the fringes of Right-Wing Twitter like a virus through a karaoke bar. According to Pauline Hanson of the Australian party One Nation it is an attempt to establish a ‘socialist left Marxist view of the world’. James Delingpole describes it as a ‘global communist takeover plan’. This might sound like something cooked up in the lizard-stalked imagination of a nut but it refers to a real phenomenon. The World Economic Forum, which organizes the annual conference Davos, has launched an initiative called, yes, ‘the Great Reset’. It has its own website. 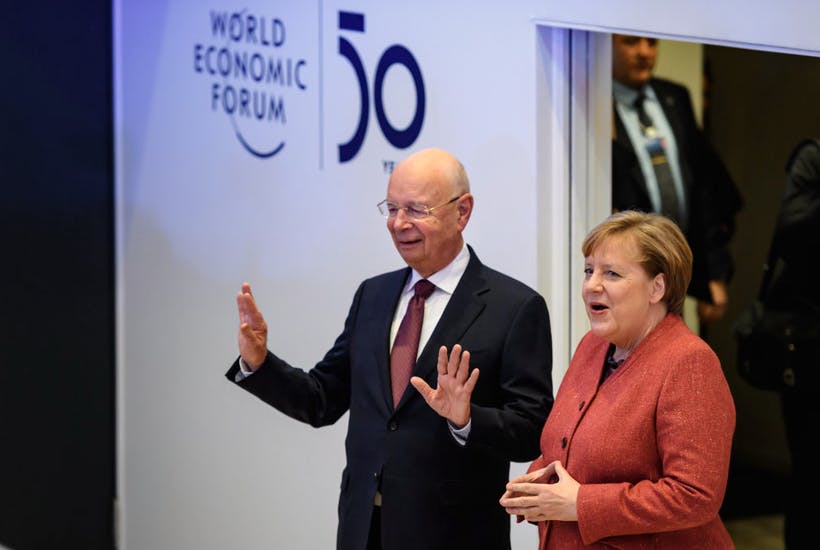 So, it is not just a feature of hot-headed conspiratorial fantasies. It exists. But as what? Somehow, it is difficult to believe that the World Economic Forum and its partners are, as Hanson and Delingpole suggest, communists. Its partners, after all, include Apple, Microsoft, Facebook, IBM, IKEA, Lockheed Martin, Ericsson and Deloitte. In nothing else, if all the biggest beneficiaries of capitalism are communists, what does that say about capitalism?
.
Still, we should always be careful before writing theories off as nuts. It matters that some of the world’s richest and most powerful people are so interested in ‘resetting’ the way we live. You can think what you like about their ideas and activities. It would be foolish to deny their significance.
.
To find out what ‘the Great Reset’ actually means, I turned to the book written by the World Economic Forum founder and Ernst Stavro Blofeld lookalike Klaus Schwab in collaboration with the economist Thierry Malleret. COVID-19: The Great Reset considers a world after the pandemic — audacious given that it was written less than six months after the virus had even appeared.
.
If you read The Great Reset in anticipation of some kind of baroque manifesto for world tyranny, you will be disappointed. There are no elaborate schemes for globe-spanning coup d’états and techtalitarianism. Schwab and Malleret report, with evident glumness, that intergovernmental organizations have gloomy prospects in a world where the Chinese essentially do what they want. A section about surveillance ends with a bland, dutiful passage about balancing safety and personal freedom.
.
Towards the end of the book, there is an earnest little section about safeguarding mental health, and then a sunny little riff about walking in nature to avoid inflammation. This is no Communist Manifesto. The Communist Manifesto was a bracing read.
Schwab is peddling his idea of ‘stakeholder capitalism’, which essentially maintains that corporations have more expansive duties than maximizing profits for shareholders. This is a concept so vague that Facebook, IBM, Lockheed Martin et cetera are free to interpret it quite as they wish.
.
‘Firms can go on privately shoveling money to their shareholders and executives,’ as Steve Dunning writes for Forbes, ‘while maintaining a public front of exquisite social sensitivity and exemplary altruism.’ Amazon can proclaim that ‘Black Lives Matter’, for example, while its employees piss in bottles for fear of being fired for taking toilet breaks.
.
An air of otherworldliness pervades this book. One of its symptoms is its constant references to ‘we’: ‘we will’, ‘we should’, ‘we must’. Who are we? I think Schwab and Malleret mean ‘mankind’ but in practice it means ‘Davos Man’, a species of high-status politician, businessman or academic about whom Samuel Huntington wrote:
‘These transnationalists have little need for national loyalty, view national boundaries as obstacles that thankfully are vanishing, and see national governments as residues from the past whose only useful function is to facilitate the elite’s global operations.’
.
Davos cosmopolitanism manifests itself in an apparent blindness to cultural and historical peculiarities. It also leads to naïve multilateralism. ‘The absolute prerequisite for a proper reset,’ Schwab and Malleret conclude, ‘is greater collaboration and cooperation within and between countries.’
.
Of course, global threats require global cooperation. But the book evinces little comprehension of the downsides of the globalization. The COVID-19 pandemic, for example, was exacerbated by faith in the hapless WHO and a chronic inability to close borders. After Wuhan was shut down, it should have been as difficult for a Chinese person to enter the EU as it would be for Alex Jones to enter Area-51, but Davos Man is stubbornly committed to the idea that integration solves all ailments, including its own.
.
This otherworldliness is also evident when Schwab and Malleret write about culture. They tell us three times that man is a ‘social animal’, yet a desiccated understanding of that social life emerges as they reflect on how social media platforms can transform communal life. Schwab and Malleret do admit that online communication cannot entirely replace human contact – they write about ‘Zoom fatigue’. But my eyes rolled from head, into the kitchen and under the fridge when they wrote that ‘driving to a distant family gathering for the weekend’ might become less attractive when ‘the WhatsApp family group is not as fun but…safer, cheaper and greener’. Buying a sex doll would be safer, cheaper and greener than getting married. That doesn’t mean it is a good idea.
.
We should not overstate the scale of elite coordination or cunning. The Great Reset fallacy leads us to bundle disparate disorientating effects of historical forces, ideological paradigms, technological change and random chance into a single, comprehensible package. It’s a seductive yet misleading way of thinking, one which makes people suppose, for example, that automation is a feature of a communist plot, not an outgrowth of unrelenting capitalism.
At the same time, the elite consensus on ‘the way ahead’ is disturbing. One critic has called Davos an ‘ideological synchronization environment for individuals, corporations, and governments to keep on the same page.’ That is different from conspiracy — but not that different. When bad ideas are adopted internationally by some of the richest and most powerful people in the world, the effect can be the same. The Great Reset might be all the more terrifying for not being a sinister plot.

3 thoughts on ““Own Nothing and Be Happy” = The Great Reset”