You won’t find this anywhere on the lame stream media. They rather blame the Armenian Christians for not running fast enough.

Azerbaijanis & Turkish Troops Behead Armenians Who Are Still Alive, Mutilate Their Bodies, Drag Civilians From Their Homes And Execute Them On The Sidewalk. Then, They Post The Videos On Anonymous Social Media Accounts 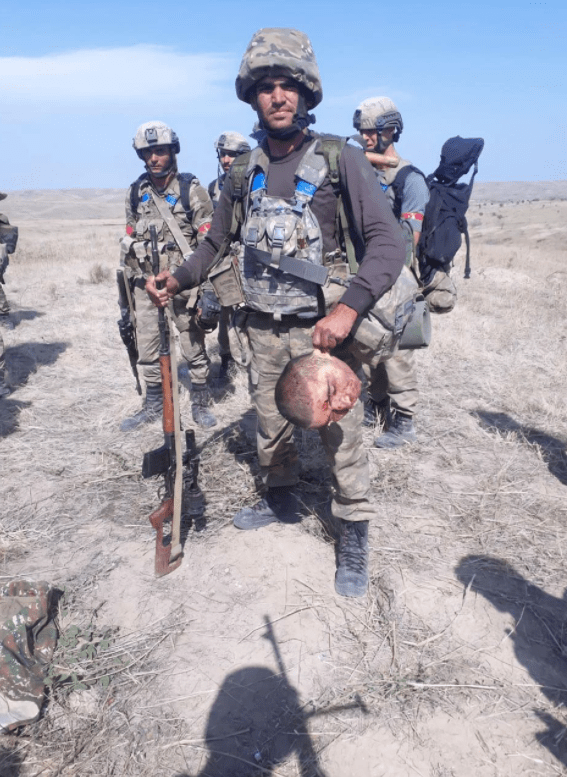 A young man is beheaded alive while he struggles to getaway. Azerbaijani soldiers laugh, cheer, and celebrate the slaughter as one of them uses an ordinary knife to cut his throat.

An elderly Armenian man begs for his life, but an Azerbaijani soldier holds him down and cuts his throat.

Azerbaijani soldiers drag Armenian civilians out of their homes to the sidewalk and then executethem.

Azerbaijani soldiers burn the body of an Armenian.

Leading up to the attack on September 27, Azerbaijan ramped up its public relations campaign, employing not one but six of K Street’s heavy-hitting firms, including the Livingston Group, Stellar Jay Communications, BGR, the Podesta Group, and DLA Piper. Last year the country spent $1.3 million on lobbying.

The war launched by Azerbaijan and Turkey against the Armenian Republic of Artsakh (Nagorno Karabakh) in the South Caucasus on September 27 was halted through an agreement, which was brokered by Russia and imposed on Armenia. Based on the circulating agreement, Armenians relinquished most of their homeland in Artsakh to Azerbaijan by December 1, forcing any Armenians living in those regions to depart.

During their indiscriminate shelling of Artsakh, the aggressors – Azerbaijan, and Turkey, accompanied by ISIS and Syrian jihadist forces – committed many war crimes against Armenians. They murdered civilians and injured journalists. They burned villages, forests, and churches. They tortured and beheaded Armenians, and executed prisoners.

BBC reported on October 24: “One video posted on a messaging app shows what appears to be two Armenians in military uniforms being captured by troops from Azerbaijan. A second video seemingly shows the same Armenians being shot with their hands behind their backs. Armenian authorities have identified the men as Benik Hakobyan, 73, and 25-year-old Yuri Adamyan.”

Azerbaijani forces also used cluster munitions and white phosphorus against Artsakh. “Azerbaijan has repeatedly used widely banned cluster munitions in residential areas in Nagorno-Karabakh,” according to an October 23 report by Human Rights Watch (HRW). “Cluster munitions have been banned because of their widespread indiscriminate effect and long-lasting danger to civilians,” it added.

The false, obsessive belief that Artsakh belongs to Azerbaijan has resulted in an ethnic cleansing against indigenous Armenians from their lands.

The area called Artsakh, originally one of the ancient provinces of Armenia, has preserved a majority Armenian population throughout the centuries. Despite this, Artsakh was annexed by Soviet dictator Joseph Stalin to the New Soviet Republic of Azerbaijan in the early 1920s. Armenian peaceful requests for self-determination were violently punished by Azerbaijan.

Under Azeri control, Armenians were subject to severe persecution such as pogroms in Sumgait and Baku from 1988 to 1990. The Soviet Union collapsed the following year, and Azerbaijan, Armenia and Artsakh declared independence. Azerbaijan, however, rejected Artsakh’s independence claim and chose to launch a war in 1992, which lasted two years and cost the lives of approximately 30,000 people.

26 years later, Armenians in Artsakh are once again assaulted by Azerbaijan. This time, arms supplies and diplomatic support from Turkey helped give Azerbaijan the upper hand in the conflict. Several news agencies, governments and the United Nations have also reported that Turkey sent jihadist terrorists from Syria to support Azerbaijan in its fight against the

The Office of the High Commissioner for Human Rights (UN Human Rights)also reported on November 11:

“The UN Working Group on the use of mercenaries said there were widespread reports that the Government of Azerbaijan, with Turkey’s assistance, relied on Syrian fighters to shore-up and sustain its military operations in the Nagorno-Karabakh conflict zone, including on the frontline. The fighters appeared to be motivated primarily by private gain, given the dire economic situation in the Syrian Arab Republic, the UN experts said. In case of death, their relatives were reportedly promised financial compensation and Turkish nationality.

“‘The way in which these individuals were recruited, transported and used in and around the Nagorno-Karabakh conflict zone appeared consistent with the definition of a mercenary, as set out by relevant international legal instruments, including the International Convention against the Recruitment, Use, Financing and Training of Mercenaries, to which Azerbaijan is a party,’ said Chris Kwaja, who chairs the Working Group.

“‘Moreover, reports indicate that Turkey engaged in large-scale recruitment and transfer of Syrian men to Azerbaijan through armed factions, some of which are affiliated with the Syrian National Army. The alleged role of Turkey is all the more concerning given the similar allegations addressed earlier this year by the Working Group in relation its role in recruiting, deploying and financing such fighters to take part in the conflict in Libya,’ Kwaja added.”

The UN report was released two days after the treaty was signed, but Turkey’s President Recep Tayyip Erdogan was always transparent about his support for the war against Artsakh. “We support Azerbaijan until victory,” Erdogan said on October 6. “I tell my Azerbaijani brothers: May your ghazwa be blessed.”

Ghazwa in Islam refers to a battle or raid against non-Muslims for the expansion of Muslim territory and/or conversion of non-Muslims to Islam.

In another speech on November 1, Erdogan said, “We are in Syria, Libya, Azerbaijan. We have displayed the same dignified attitude from the Mediterranean to the Black Sea, from Syria to Libya, from Cyprus to Karabakh.”

Prior to the war, Artsakh’s population was around 150,000. Turkish and Azeri aggression against the region has caused massive destruction on civilian infrastructure including homes and hospitals and the displacement of about 90,000 Armenians. On October 23, a group of genocide scholars issued a statement “on the imminent genocidal threat deriving from Azerbaijan and Turkey against Artsakh.”

Completely abandoned by the international community and faced with an existential threat, Armenia had to sign an agreement which allowed Azerbaijan to take over much of Artsakh. With 60% of Artsakh destroyed and the remainder of land to be surrounded by hostile Azeri forces, many indigenous Armenians who have lived in Artsakh for generations see no choice other than to flee their homeland.

Meanwhile, during the war, hundreds of Turks and Azeris took to the streets in the French city of Lyon, looking for Armenians. They marched with Turkish flags, chanting Allahuakbar (Allah is the greatest), and “Where are you Armenians? Where are you? We are here… sons of bitches.”

In another move to counter Turkish aggression, the French Interior Ministry banned a Turkish ultra-nationalist group known as the Grey Wolves after a memorial to victims of the 1915 Armenian Genocide was defaced.

The Turkish Ministry of Foreign Affairs condemned the decision, saying that “there is no such a movement called ‘Grey Wolves’. Attempts to resort to imaginary decisions presuming the existence of such a movement or formation based on some individuals and their actions, reflects the latest contradictory psychology that this country lives in.”

The Grey Wolf movement, however, does exist. The Grey Wolves (Turkish: Bozkurtlar), officially known as Idealist Hearths (Turkish: Ülkü Ocakları) is a Turkish far-right, racist organization and movement affiliated with Turkey’s Nationalist Movement Party (MHP). The movement has been involved in many acts of violence against civilians as well as political and religious figures. This includes the Alevi massacre in the city of Maras in southeast Turkey in 1978 and the attempted assassination of Pope John Paul II in 1981.

Attacks against Armenians in the South Caucasus and Europe demonstrate that this war is not only about land. It is about pan-Turkic, expansionist aspirations of Turkey and Azerbaijan as well as their unrelenting, genocidal hatred against Armenians.

As was the case during the 1915 Armenian genocide by Ottoman Turkey, the international community has once again abandoned Armenians, who are an indigenous and peaceful people. If new and effective steps are not taken by the civilized world immediately, neo-Ottomanism, pan-Turkism and jihad will win through the agreement imposed on Armenia.

Meanwhile, some opposition to the agreement has begun emerging in Europe. On November 11, France 24 reported that the French presidency said it was studying the parameters of the Russian-brokered ceasefire, adding that a long-term deal should also “preserve Armenia’s interests.” Macron’s office quoted him as saying that efforts should be made “without delay” to try to come up with a “lasting political solution to the conflict that allows for the Armenian population of Nagorno-Karabakh to remain in good conditions and the return of tens of thousands of people who have fled their homes.”

To guarantee the return of Armenians to their ancient homeland and to prevent the complete erasure of the remaining Armenian cultural heritage by totalitarian Azerbaijan, Western governments must officially recognize Artsakh. The West must let dictators know that their war crimes and genocidal ambitions will not go unpunished.

Please read this FAQ article to learn more about Artsakh and its rich Armenian history.