2 articles
The Spectator Australia 8 May 2021 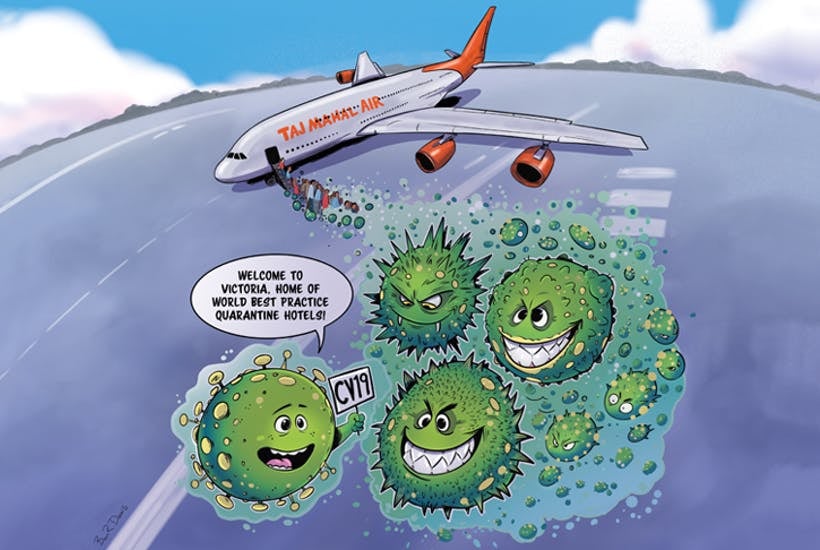 Could there be a more perfect metaphor for not only the multiple failures of the Andrews Labor government but also the broader Left’s destruction of Australia than the ongoing Victorian hotel quarantine saga? The latest horrors, exposed by the Australian newspaper during the week, include numerous telling incidents that go way beyond the manifest incompetence of the quarantine program itself.
.
Sporting the fashionable blond locks and surfie stubble made popular by Victoria’s hapless chief medical officer Brett Sutton, we now have the head of the quarantine program itself, Matiu Bush, accused of twice flouting his own guidelines. What is most revealing about the allegations is not so much the infringements themselves, but the claim that Mr Bush – who has subsequently been stood down – apparently saw himself as being above his own rules, choosing to ‘override the protocols’ when they didn’t suit his own personal convenience.
.
Here we have a textbook example of the classic behaviour of every socialist or totalitarian bureaucrat: one rule for the masses, but a wave of the hand exemption for the person in authority. From the corridors of the Kremlin to the holiday homes on Hunan island, this is the inevitable result of the collectivist ‘we know what’s best for you even though we ourselves don’t need to do it’ approach that has typified the Covid pandemic, with a blind eye being turned to Black Lives Matter protest marches but fences being put up to stop the Diggers from celebrating Anzac Day.
In Britain, the prime example of this phenomenon was the expert who advised stringent lockdowns but then incredibly spent most of his evenings flouting them to visit his mistress.
.
Indeed, Victoria during the last year has resembled nothing so much as a Sacha Baron Cohen or Peter Sellers spoof of a failed socialist fiefdom; over-the-top police officers handcuffing a pregnant woman in her pyjamas, absurd rules and regulations taken to surreal extremes and endless, tedious political posturing and interminable press conferences all designed to cover up gross incompetence endemic at all levels. Victoria, you have had your taste of socialism – is this what you really intend to re-elect next year?
.
The foolishness continues. Unbelievably, during the middle of last summer at the Park Royal Hotel at Melbourne Airport – a quarantine hotel – air conditioning was switched off every night to ‘save energy’, leading to ‘a build up of contaminants including viral particles’. Welcome to the brave new world of woke zealotry and leftist dogma, brought to you by the same people who selected their quarantine security companies based not on expertise but on ‘indigenous and diversity credentials’. The same mob who likened the health impact of the corona virus to the ‘invasion’ of Australia by Captain Cook in 1770.
.
The simple truth of competence in government is priorities. If they are skewed to identity politics, climate dogma and neo-Marxist historic revisionism, you will surely and swiftly be mired in incompetence and failure.
.
The utterly absurd focus of a hotel quarantine program on ‘saving energy’, presumably in order to ‘reduce emissions’ in order to ‘save the planet’ because of ‘catastrophic climate change’, goes to the heart of everything that is wrong with the current political obsession with global warming, at both state and federal levels. This week in the US, in an echo of our own Chief Scientist Alan Finkel’s struggle several years ago in Senate Estimates to explain what impact climate policies would have on the climate (answer: ‘none’), a Biden official this week floundered and failed to answer the simple question put by a Republican: ‘for our trillions of dollars of Green investments, how much will we reduce the earth’s temperature?’ A coherent answer, of course, never materialised.
.
Imagine the hilarity of putting the same question to the dope who chose to switch off the Park Royal aircon, presumably some impassioned climate activist who went home patting his or herself on the back: ‘By just how much do you think this decision of yours will reduce the earth’s temperature?’
.
Yet the stupidity of that decision is nothing compared to the idiocy of the federal government continuing with the Paris Agreement and committing to ‘net zero’ – along with so many of our woke major institutions and corporations. The decimation, destruction and despair that await Australian households and businesses in coming years thanks to this obsession with cutting emissions will make the sweaty, stuffy corridors of the Park Royal Hotel look like paradise.