Strange days indeed.  We witness an Italian politician getting arrested for trying to stop hostile Mohammedans invading his country. You wonder, what part of  “illegal ” do the Courts not understand. 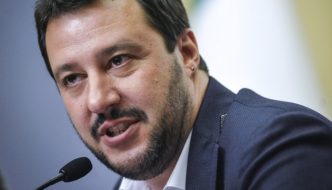 Anti-illegal migration leader Matteo Salvini is rising again in popularity in Italy, in the wake of an illegal migrant surge. The influx of illegal Muslim migrants has not stopped during coronavirus lockdowns; Spain, Greece, Italy and the UK are particularly affected.

These economic migrants, once they arrive at port,  make their way to the EU countries of their choice, usually Western European countries which offer the greatest state benefits.

As Salvini once put it: “Italian citizens get ‘fines and lockdowns,’ illegal migrants get ‘open ports.’” Globalists have done everything they could to stymie the efforts of Salvini, who has remained resolved. In October 2020, Salvini was taken to court on the absurd charge of “kidnapping” because he was preventing migrants from entering. His response: “I will plead guilty to defending Italy.” The case drags on. Less than two months ago, as Salvini faced trial, his lawyer, Giulia Bongiorno, stated that she was “certain the court would determine that no kidnapping was involved.”

To convict a leader of “kidnapping” for acting in defense of protecting the citizens of his own nation would render any court a laughing stock, yet the absurdity of globalists knows no boundaries.

“Polls, the center-right breaks through 50%: this is trouble for the Pd and M5S,” translated from “Sondaggi, il centrodestra sfonda il 50%: arrivano guai per Pd e M5S,” by Luca Sablone, Il Giornale, June 4, 2021:

The center-right is not stopping anymore: Italians continue to prefer the coalition formed by Lega, Fratelli d’Italia and Forza Italia, to the detriment of the Democratic Party and the Five Star Movement, which, on the other hand, are still losing support and moving further and further away from their political opponents….It is no coincidence that the latest polls speak very clearly: the center-right has a clear advantage over a center-left in great trouble.

The center-right is rewarded by the latest survey carried out by Antonio Noto for Porta a Porta, a historic program conducted by Bruno Vespa on Rai 1. The Lega of Matteo Salvini remains firmly in the first place, although, however, it lost 0.5% and has 21.5%. The strong acceleration of Fratelli d’Italia has been confirmed, which with an increase of 0.5% surpasses the Democratic Party and stands at 18.5%. The numbers of those who prefer the Democratic Party remain unchanged, in third place in the ranking, with 18%. Followed by the Five Star Movement at 16%, down by 1%, and Forza Italia at 7% after a slight decline of 0.5%. The new entry Coraggio Italia by Toti and Brugnaro makes its debut with 3.5%. The small forces of the Italian political scene conclude: Carlo Calenda’s share loses 0.5%, thus reaching 2.5%; Italia Viva by Matteo Renzi remained stable at 2%; Us with Italy remains at 1.5%; Verdi and the Italian Left stalled at 1.5%; Free and Equal loses 0.5% and thus ends with 1%. The center-right breaks through 50% and enjoys 52%. On the other hand, the center-left (Democratic Party, Five-Star Movement and Leu) is doing much worse, and finishes with only 35%.

The federation of the center-right
Within the center-right the hypothesis of a federation remains alive. Matteo Salvini’s intention – reaffirmed in the interview with ilGiornale on newsstands today – is to reach the federation of center-right forces by June, at least those that support the government led by Mario Draghi. The first step could be the creation of single groups in the Chamber and the Senate, “with coordination work, with joint press conferences, with legislative initiatives in the name of unity”. In this way we would like to strengthen the unity of the coalition, finding a synthesis between the various positions without leaks forward: “We have the duty to create common lists with everyone in 2023. All together in the majority, choosing candidates common to the entire center-right, then each one will compete in the proportional and there will express his own identity “.