And there is no way of knowing what the long-term effects are:

How can anyone not put 2 and 2 together? Depopulation proponents like Bill Gates fund vaccine development. Spike protein gathers in ovaries. C’mon people. 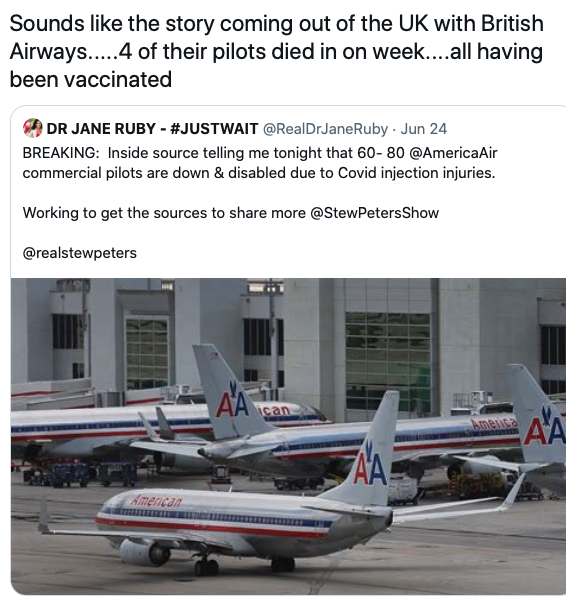 YouTube’s censorious flirtation with the immoral equivalence of book burning is on the verge of devouring its newest victim.

In their latest “cease and desist,” or “your channel will be deceased,” compliance order, the “free speech” platform has issued Bret Weinstein with his second strike for alleged “community standard violations.”

Weinstein, a non-conformist evolutionary biologist, earned his first strike by posting an interview with Dr. Perrie Kory to YouTube talking about treatments for C19 and the potentially criminal censorship of the cheap, life-saving drug, Ivermectin.

It was a batty business move, revealing YouTube’s lean towards lunacy over logic.

Weinstein’s second strike appears to be punishment for posting an open-ended, science-based discussion on the shadows hovering over the highly experimental C19 vaccines.

The panel dug deep into the nature of biodistribution. Posited well-reasoned arguments, and backed scientific considerations about a future public health crisis brought on by the wide push to inject entire populations with rushed, and by definition, experimental C19 “vaccines”.

As well as this they discussed the organised effort to suppress the number of C19 vaccine victims, alongside the covering up or effective off the shelf medications that have a growing track record as a prophylaxis (preventer/symptom minimiser).

Kirsch said that what triggered his questioning about the vaccine were the experiences of people he knew.

One person had had the Pfizer variant, then ended up in hospital overnight due to a heart attack two minutes after receiving the first dose. Another person mentioned how his healthy wife couldn’t hold a glass properly because her hand was shaking uncontrollably.

Kirsch followed the proverbial rabbit down the rabbit hole from there, later remarking that “if I had known what I know today, I would never have vaccinated my three young daughters. I would have done everything in my power to have tried to change their minds.”

“What these vaccines do, is they encode spike protein alone. So that the immune system will learn to recognize spike protein and will catch it quickly when one is confronted with Covid, but the spike protein itself we now know is very dangerous it’s cytotoxic (produce cell damage).”

“That description is more than fair, and I alerted the FDA about this risk months ago. The FDA responded, saying that they didn’t think the documentation was a sufficient documentation of the risk.”

“We have no problems at all with mRNA vaccines. It’s just this particular vaccine because of the spike protein; and because it breaks. It cleaves off the cell and it goes throughout your body and your brain your heart; anywhere. That you can have these symptoms that are so varied, whether it’s a 16-year-old who can’t talk or see 48 hours after injection or someone who’s handshakes.”

Concerning censorship, the panel agreed that “vaccine” victims are ignored by legacy media.

Confirming for many who’ve followed the silencing of dissent on C19 treatments, Dr. Malone said, big tech has also been actively censoring discussion about the serious side effects of the “vaccine” for “well over a year.

He said, “It’s well documented. It’s unequivocal and my argument is that by implementing censorship, what they’re doing is making it so that signals can’t be detected; people’s voices can’t be heard.”

For example, Facebook removed a 200k plus member page for people sharing their “vaccine” stories.

Dr. Malone continued, “I’m of the opinion that we have to have free and open discussion of risks, and we have to have full disclosure of risks. Groupthink [on this issue] is a real problem.”

Kirsch qualified the problem of groupthink, or as Eric Clapton called it unqualified acceptance of “pro-C19 vaccine propaganda”, saying,

“We’re being trained to think that it’s safe. I think one of our problems here is the assumption that this is like every other vaccine we’ve ever seen, and it’s not. It’s very different technology.”

This groupthink explanation lends reason to why the “vaxxed” gaslight the “unvaxxed” as “anti-vaxxers.”

It’s curious to note how C19 vaxxers would rather self-promote than sigh with the wounded.

YouTube’s censoring of this debate is an embrace of lunacy over logic.

There’s also uncertainty about whether or not these vaccines are actually vaccines. They seem to only minimise symptoms, not prevent Covid-19, and those who are vaccinated are still having to quarantine themselves.

While the “vaxxed” know what they’ve apparently been “vaxxed” against, they have little, to no idea, what they’ve been vaxxed with.

This whole debate isn’t about the effectiveness of vaccines in general.

This whole debate is centred on the question: is what we’re being encouraged to inject into our bodies a vaccine, or venom?

As Weinstein asserted: “you cannot get unvaccinated…”

Or in the words of my father-in-law, “there is no uninstall button.”

Perhaps the most important take-away from all this is that if authorities can silence someone with the background, experience and knowledge of medical professionals, and scientists such as Bret Weinstein, there’s nothing stopping them from coming after you.

When censorship devours in the name of narrative, not news, to follow the science, may mean following the silence.