To say otherwise would be, you guessed it… “racist”.

Flashmobs of brownies raiding expensive retail stores are becoming increasingly common where DemRats are refusing to enforce the law. It would be prudent for Neiman Marcus to withhold tax payments to cover the damage.

A video posted to Instagram captures yet another brazen act of shoplifting in San Francisco, this time at the luxury department store Neiman Marcus where at least ten people stole armfuls of designer goods and then fled without anyone trying to stop them.

The footage reveals the shoplifters leaving the Union Square store, each carrying bags of stolen items with the security tags still dangling off of them. The perpetrators then ran in different directions, with a few speeding away from the scene in a white sedan.

One person watching says, ‘They can’t do anything,’ perhaps referring to security at Neiman Marcus. 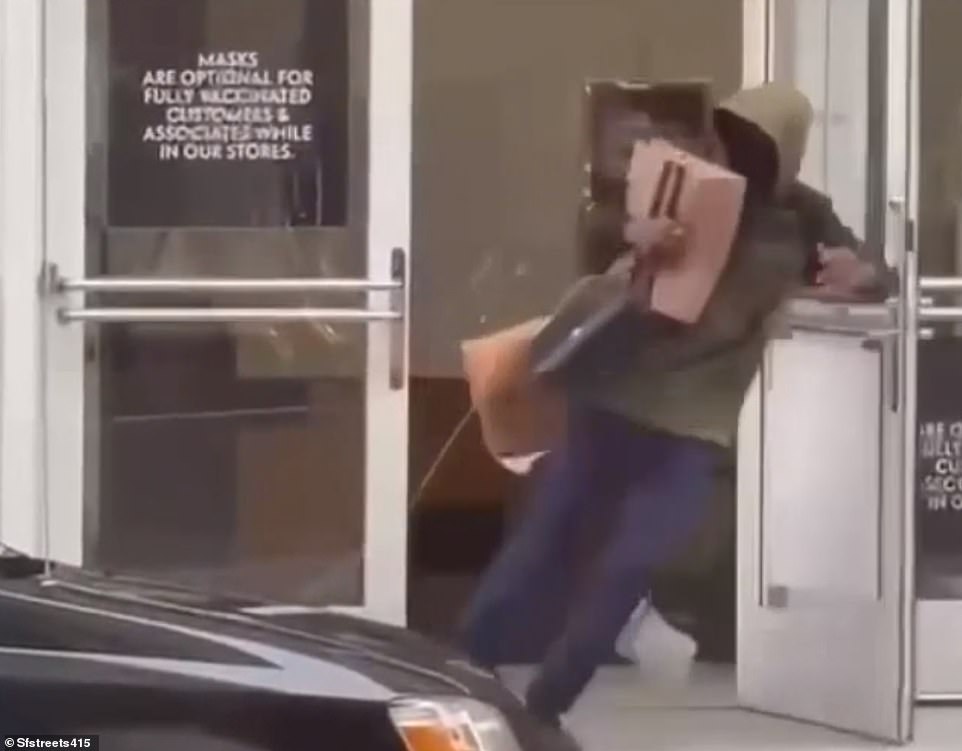 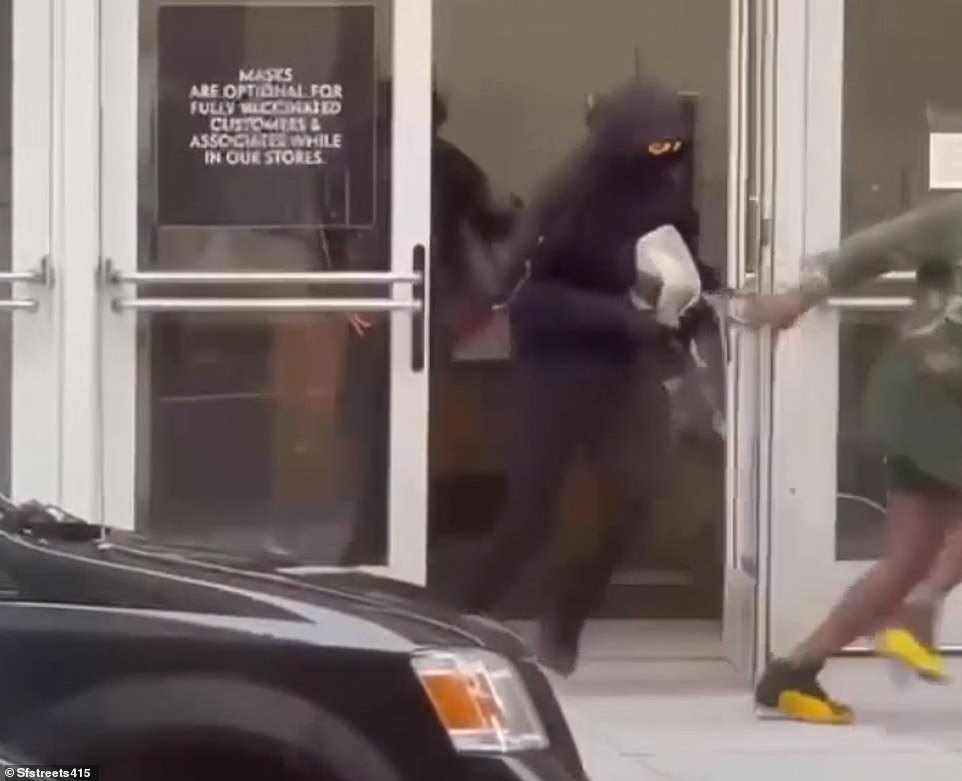 A video posted to Instagram captures yet another brazen act of shoplifting in San Francisco, this time at the luxury department store Neiman Marcus where at least ten people stole armfuls of designer goods and then fled without anyone trying to stop them.

The footage reveals the shoplifters leaving the Union Square store, each carrying bags of stolen items with the security tags still dangling off of them. The perpetrators then ran in different directions, with a few speeding away from the scene in a white sedan.

One person watching says, ‘They can’t do anything,’ perhaps referring to security at Neiman Marcus.

Shoplifting cases are all too common in San Francisco, where charges of property theft less than $950 in value was downgraded from a felony to a misdemeanor in 2014 – meaning that store staff and security do not persue or stop thieves who have taken anything worth less than $1,000.
.

Shoplifting cases are all too common in San Francisco, where charges of property theft less than $950 in value was downgraded from a felony to a misdemeanor in 2014

The person who posted the video wrote a message demanding San Francisco crackdown on shoplifters and called for District Attorney of San Francisco Chesa Boudin to be removed from office.

‘Everyone in the city is tired of this so please sign the recall petition to oust Chesa Boudin now! Crime is legal basically and allowed and tolerated due to policies put in place and supported by all our supervisors and mayor and DA,’ Instagram user sfstreets415, whose bio reads, ‘Asian photographer and crime reporter,’ wrote.

The petition was first launched in March to recall Boudin, who has come under fire in recent years, along with the city’s leadership, for allegedly not doing enough to combat San Francisco’s shoplifting problem.

The city’s surge in such incidents arose almost immediately after the passage of Proposition 47, a ballot referendum known as the Safe Neighborhoods and Schools Act that downgraded the theft of property less than $950 in value from a felony charge to a misdemeanor.

The monetary value of the goods stolen from Neiman Marcus is not clear and police are still investigating the incident. According to reporting from KTVU, when officers arrived at the scene the suspects were already gone.

Witnesses told KTVU that the store was about to close when the suspects came in and smashed display cases before nabbing the goods and leaving.

Larceny is the most common crime committed in the Bay Area, according to the San Francisco Police Department’s Crime Dashboard.

Defined by the department as including ‘thefts of bicycles, motor vehicle parts and accessories, shoplifting, pocket picking, or the stealing of any property or article that is not taken by force and violence or by fraud.’ Burglary is different from larceny because it involves unlawful trespassing to commit a crime.

The most recent retail chain to address San Francisco’s shoplifting problems was Target, which announced last week that six of its San Francisco stores will be closing at 6pm instead of 10pm in an effort to prevent further theft. The retailer wrote in a statement, ‘for more than a month, we’ve been experiencing a significant and alarming rise in theft and security incidents at our San Francisco stores.’

One Target security guard, Kevin Greathouse, told Newsweek that management has instructed him and other employees not to physically engage the shoplifters.

Greathouse said he carries a handgun, a taser and pepper spray on him at all times when at Target. However, he described one alleged shoplifter recently threatening him with a knife and said, ‘I don’t have any intention of getting stabbed for $60 worth of stuff.’

It is not clear what Neiman Marcus’s security guard intervention policy is, though the department store sent a statement to the Daily Mail that reads, “The safety and welfare of our associates and customers is our top priority, and we’re relieved to report that no one was harmed in the incident. We’re cooperating with the San Francisco Police Department in their investigation.’

Safai told Newsweek that the city and the district attorney’s office have gotten involved in Target’s case and that many of the retail giant’s alleged perpetrators are part of an organized retail crime group.

“These are people who are recruited, organized and are reselling these good and San Francisco is hurting for it,” Safai said.

Small business owners can’t always afford security guards and must take matters into their own hands when it comes to addressing shoplifting. Such is the case for the family-owned Daniel’s Pharmacy, in the Crocker-Amazon neighborhood, where Ed Nasrah told the Daily Mail that staff won’t let shoplifters get off easily.

‘We approach them and try to take [stolen goods] back,’ he said. ‘Once they know you’ve got a reputation for not letting shoplifters get away, they’re less likely to do it. We do get ripped off sometimes and people get away with stealing things, I’m not gonna lie about that. But when we see it, we don’t just let them get away.’

Jalal Haydari, owner of Limoncello Italian Market and Deli, recently told Fox News that his store in tony Pacific Heights is targeted day and night. He has 32 cameras installed to catch criminals and has caught many in the act.

One video reveals a thief breaking in through a window before stealing from a cash register and nabbing the electronic tablets used to take delivery orders. Another video reveals a man taking armfuls of food containers and drinks off the deli counter before fleeing.

Broken windows are costing him Haydari even more than stolen merchandise, totalling $23,000 in the past year. “My store has been broken into more than 14 times,” Haydari says. “And I have all the police reports, but I have not been notified if anybody got arrested. I think before you open a business in San Francisco you should think twice because you’re not protected at all no matter what.”

A statement sent to Fox News by Safeway supermarket reads, “Like other retailers. we’ve seen a dramatic increase in shoplifting incidents and losses from shoplifting since California sentencing laws changed in 2014 to make all theft below $950 a misdemeanor when it was previously a wobbler, either a felony or a misdemeanor based on prosecutorial discretion. Enterprising thieves have figured out there are few consequences to shoplifting if they keep the value of their crimes below $950.” 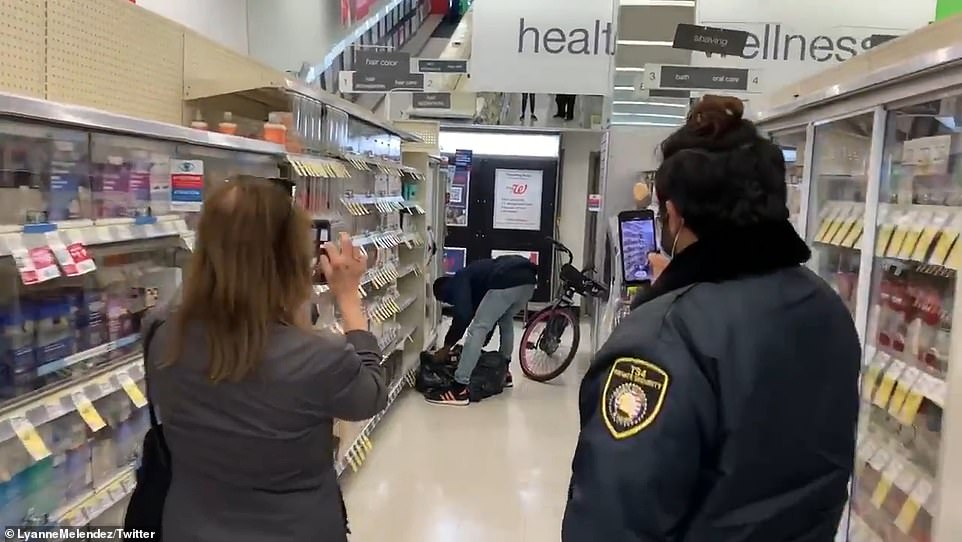 The Neiman Marcus video’s surface comes less than a month after another shameless shoplifting case was caught on camera. Footage showed a brazen robber, on his bicycle, as he filled a garbage bag with products at a San Francisco Walgreens and bicycled out of the store – as a bystander and security guard watch 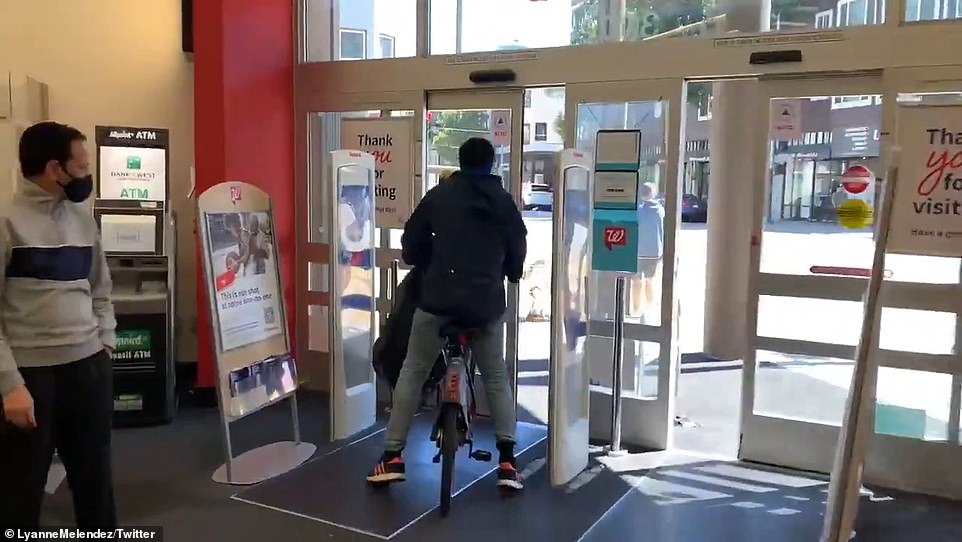 The man rode his bike to the store, filled a garbage bag with stolen goods and rode away
.

The Neiman Marcus video’s surface comes less than a month after another shameless shoplifting case was caught on camera and went viral online. The footage posted on Twitter by ABC7 Reporter Lyanne Melendez was filmed on June 14 and reveals the moment a brazen robber filled a garbage bag with products at a San Francisco Walgreens and bicycled out of the store after no one tried to stop him.

According to KTVU, San Francisco’s District Attorney’s Office have since filed formal charges against the perpetrator, Jean Lugo Romero, for the incident as well as other acts of commercial shoplifting and robbery at various Walgreens and CVS stores throughout the city.

The Walgreens scene followed the closing of 17 San Francisco Walgreens locations due to shoplifting cases, where theft in the pharmaceutical chain’s 53 remaining stores is four times the average for stores elsewhere in the country, according to the San Francisco Chronicle. One Walgreens reportedly loses $1,000 a day to shoplifters, the news outlet adds.

Across the city, 18 Walgreens stores saw 94 shoplifting incidents between September 1 and December 31, 2020, according to data compiled by the San Francisco Police Department and obtained by news outlet Mission Local.

Walgreens also spends 35 times more on security guards in the city than elsewhere, Jason Cunningham, regional vice president for pharmacy and retail operations in California and Hawaii, said at a hearing on retail crimes held in May by Boudin and Ahsha Safaí, a member of the San Francisco Board of Supervisors, and retailers, police and probation departments.

Safai had not addressed the most recent shoplifting incident as of Tuesday morning.

Last month, he and Boudin announced a partnership with ALTO Alliance, an organization that provides legal support to retailers impacted by shoplifting in efforts to prevent repeat offenses.