How would you like to be one of the 15,000+ American citizens in Kabul, or surrounding region, and getting this notice from the United States State Department: 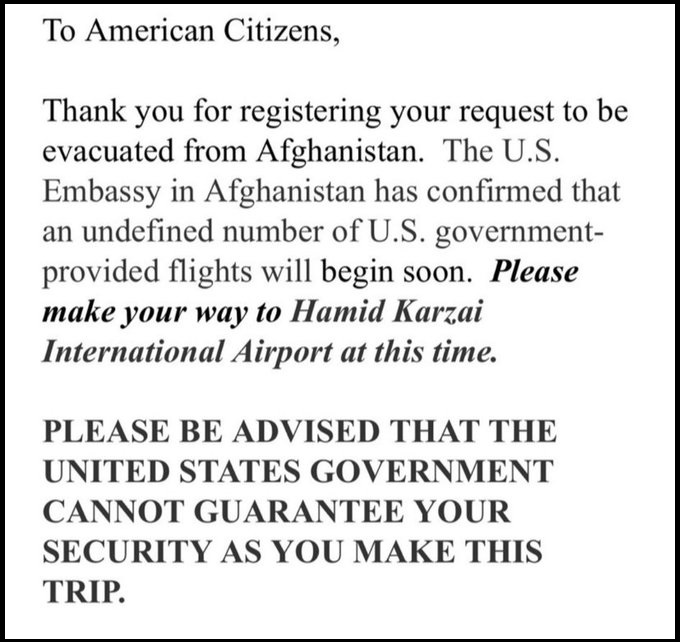 “A congressional aide tells CBS News we have no partners left in Afghanistan to safely get Americans in-country to Kabul.” (link)

…. But they planned for every contingency right? 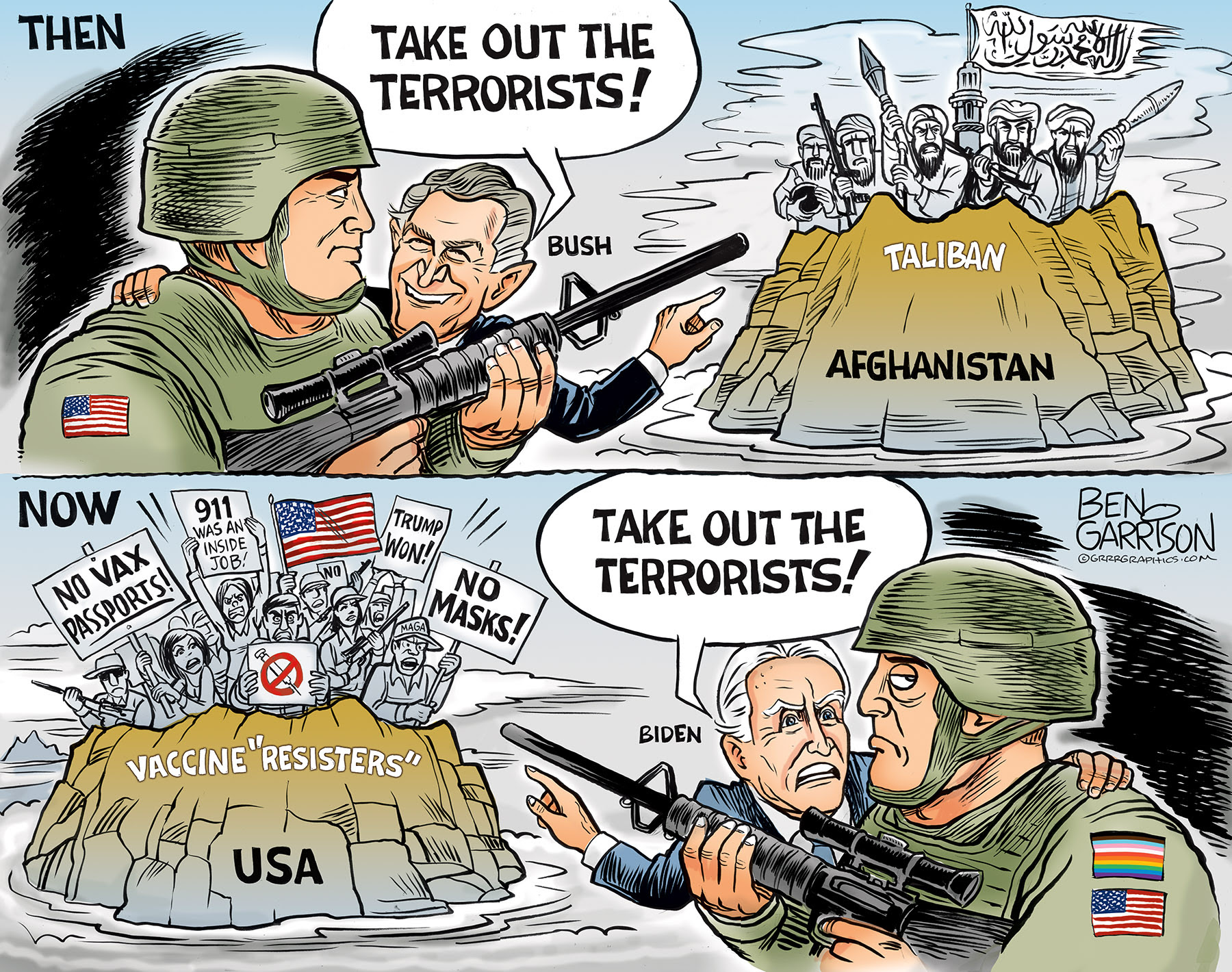 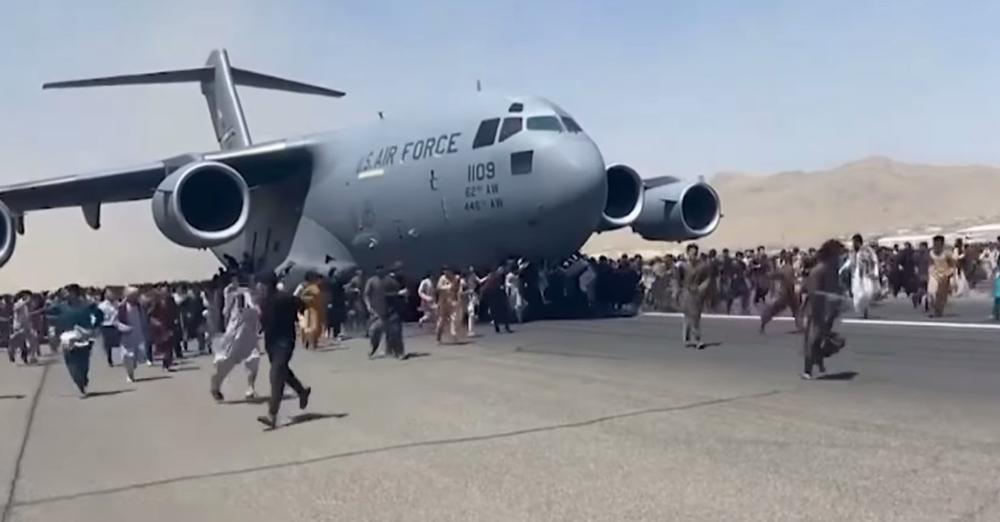 Worse than Saigon: “America’s humiliation in Afghanistan confirms that the woke West is utterly incapable of standing up for itself.”

No one is protected under Sharia. Especially not women. What a humanitarian tragedy that Joe Biden has created. 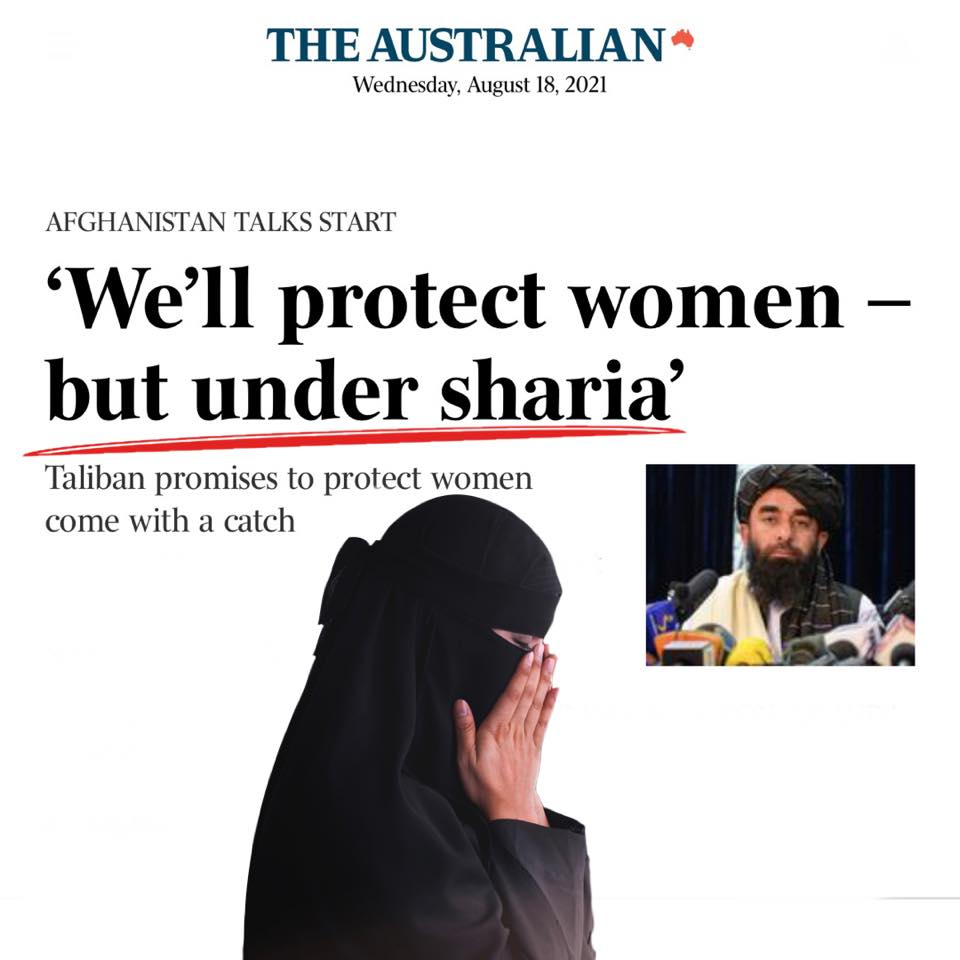 Everyone is saying it’s like Saigon in 1975. Helicopters evacuating an American embassy. Chaotic, distressing scenes at the local airport as American allies, or just plain fearful people, desperately try to flee the country. American officials convincing absolutely nobody with their unhinged claims that the ‘mission has been successful’ (in Anthony Blinken’s words). It’s clear for all to see, commentators insist: Kabul in 2021 is a replay of Saigon in 1975. America humiliated, its enemies ascendant.

Yet here’s the brutal truth: what is happening right now is worse than Saigon. Yes, America’s defeat in Vietnam was an epoch-shaping humiliation for the self-styled defenders of freedom in the Cold War clash with the ‘Evil Empire’ and its communist allies. But the routing of the US in Afghanistan, the alarmingly swift collapse of its allies in the Afghan government, the fall of Kabul like a house of cards, and the fact that Operation Enduring Freedom, launched in the aftermath of the 9/11 attacks, has ended with the endurance of the Taliban instead, with victory for the bad guys – all of this represents the most significant moment of geopolitical decline for the US in decades. Indeed, it raises questions not only about America’s global standing, but also about its very purpose and meaning as a nation.

The scale of the humiliation just suffered by the United States cannot be overstated. The most powerful military force on Earth and its incredibly well-funded allies in Kabul have been pushed aside by a regressive 12th-century movement that thinks adulterers should be stoned to death. The allies of the most technologically sophisticated army in the world have been sent packing by a ragtag Islamist army which set about painting over billboard posters for female beauty products the minute it arrived in Kabul. A nation founded in freedom – and which justified its international presence in the language of freedom for the entire postwar period – has been usurped by a movement so intolerant that it bans pop music, executes comedians who make fun of it, and beats women with canes if they are immodestly dressed.

The impact of America’s failure, of the slow, tragic journey from Operation Enduring Freedom to those images today of desperate Afghans clinging to the undercarriage of the last US military airplanes to leave Afghanistan, will be dire and long-lasting. Most immediately the US has shown itself to be an untrustworthy ally. Which nation or people in need of help would align with this supposedly freedom-loving superpower that abandons its allies to their fate when the enemy comes knocking? Who now will trust the US to assist in the building of new institutions given the rotten fruits of its multi-billion-dollar, 20-year ‘nation-building’ project in Afghanistan – a calamitously weak Potemkin government that capitulated instantly when the Taliban hit the streets of Kabul?

This geopolitical disaster for the US will also strengthen the hand of its opponents, most notably China. China is already moving to consolidate its relationship with the Taliban and to assert its authoritative influence in the new Afghanistan. Islamist forces will take succour from the victory of the self-styled Islamic Emirate of Afghanistan, too. Both regionally and among aspiring jihadists in the West, the victory of the Islamist side in the ‘war on terror’, the return to power of the movement that was hosting al-Qaeda when it visited its barbarism upon the infidels of New York City and Washington, DC, in 2001, will inspire confidence and action. Israel must be incredibly worried right now, knowing that Islamic extremists are again in the ascendant, and that its one-time chief supporter walks away from wars on terror.

The Afghan humiliation is not only a military failure – it’s a political and moral one, too. Extraordinarily bad political decisions have been taken by the US, including its willingness to trust the Taliban and its belief that this brutal, misanthropic, misogynistic movement could be a player in the ‘international community’. Even now, Washington seems completely out of touch with events on the ground in Afghanistan. Its intelligence officers said the Taliban could take Kabul within 90 days. That was four days ago. They know nothing. One gets the impression of a confused, decaying empire looking with bamboozlement upon even those parts of the earth it rules.

But above all of that, above even the political and military incoherence of the American empire, there is the corrosive cultural dynamic. This might just be the most important factor in the Afghan humiliation – the fact that the US, and the West more broadly, clearly lacks the cultural resources necessary for a clash of civilisations. This wasn’t just a territorial battle, a fight over the land of Afghanistan. It was also a cultural clash. It was a war between one side that has very strong beliefs and is more than willing to die for them, and another side that doesn’t know what it stands for anymore and would rather avoid risk and self-sacrifice if at all possible. I’ll leave you to decide which of these is the Taliban, and which the US.

This was always the West’s problem in Afghanistan: it lacked faith in the very values it claimed to be delivering to that benighted country. We will liberate women from life under the burqa, Western officials said. But isn’t it ‘Islamophobic’ to criticise the burqa, or any other Islamic practice for that matter? Our elites have insisted for years that it is. We will replace your intolerant Islamist system with a civil society fashioned by clever professors, the West promised. But isn’t it judgemental and possibly a tad racist – certainly an offence against the ideology of multiculturalism – to imply that Western democracy is superior to Islamist theocracy? As one British think-tank says, in its definition of the term ‘Islamophobia’, it is wrong to suggest that Islam is in any way ‘inferior to the West’. The West’s post-9/11 bluster was continually undermined by the West’s broader descent into moral relativism. How can you assert the civilisational authority of Western values when your entire educational and university system is devoted to questioning and demeaning Western civilisation? You cannot partake in a clash of civilisations if you loathe your own civilisation.

Anyone who thinks the Taliban did not pick up on all of this, on the Potemkin nature not only of the Afghan government but also of Western civilisation itself, is kidding themselves. The Taliban will have watched as the mighty American military became bogged down in discussions of critical race theory and the problem of ‘white rage’. They will have clocked the British army’s recruitment drive that was aimed at ‘snowflakes’ and ‘me me me millennials’ – for real – on the basis that such people have the ‘compassion’ necessary for the touchy-feely wars of the 21st century. They will know that the contemporary West is shame-faced about its history and its civilisational values and lacks ideas for how to turn its fragile youths into a fighting force, and they will understand their own life-and-death devotion to Sharia as being the opposite to all of this. They know this was a cultural clash as well as a military fight, and that they were by far the stronger side on this front.

This is the truth: America and its Western allies are too consumed by wokeness to be able to pursue a moral or military struggle for their values. The past 20 years of this slow-burning Afghan humiliation have been a modern case of fiddling while Rome burns. An intolerant Islamist army gains in strength and plots its return to power while the American and British armies obsess over how to become more trans-inclusive, which gender pronouns to use (the Royal Air Force’s list includes ‘ze’, ‘per’ and ‘hir’), how to make training exercises more inclusive of ‘snowflakes’, and how to fight wars without offending the enemy. Who can forget when US navymen wrote ‘Hijack this, fags’ on a bomb destined for Afghanistan and all hell broke loose? Such ‘spontaneous acts of penmanship’ are completely unacceptable, said the then US rear admiral. The Taliban was fighting to the death for its theocratic vision – the West was squabbling over offensive words.

This is why the comparison with Saigon is an illegitimate one. Back then, the US was forced into retreat by powerful external forces – the Vietnamese, of course, and also the anti-war movement in the US, in which vast swathes of the youth and significant sections of the elite turned against the war. The Afghan humiliation, in contrast, is a product almost entirely of internal disarray – of the exhaustion of American politics, of Western geopolitical nous, and of the West’s belief in its own project and its own values. There is nothing positive whatsoever in how the Afghan War has ended. It is a disaster for the Afghan people, a devastating blow to the confidence of the United States, and another backward step for those of us who believe that the values of democracy and freedom are superior and are worth fighting for. The Afghan calamity will cast a long shadow, for a long time.

Brendan O’Neill is editor of spiked and host of the spiked podcast, The Brendan O’Neill Show. Subscribe to the podcast here. And find Brendan on Instagram: @burntoakboy