Don’t bank on  Dr Fraudci. Dr Doom wants you to be miserable & locked up for your own good. Or is it for the “greater good?” 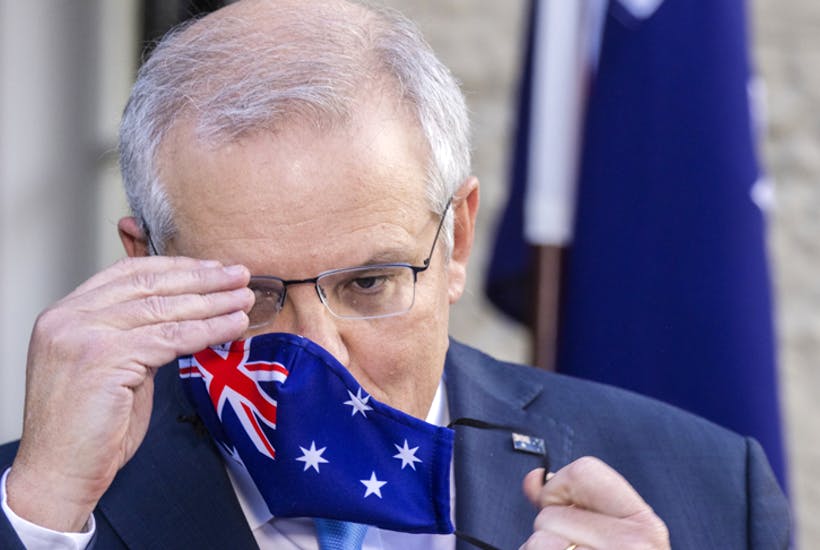 Rowen Dean The Spectator Australia 28 August 2021
.
Oh, what a difference a week makes! As Australia reaches a tipping point in the number of people vaccinated – in other words past 50 per cent – certain politicians suddenly spot the flaw in their 18-month long ‘fear porn’ campaign. The focus group-driven ‘who do I trust to keep me safe?’ strategy is suddenly swept away by the far more appealing ‘who do I trust to set me free?’ mantra.
Although the Prime Minister and his advisers are to be applauded for spotting this opportunity and giving it an appropriate sound bite (‘if not at 70 per cent, if not at 80 per cent, then when…?’) credit must actually go to the Treasurer Josh Frydenberg who bravely went on the ABC a few days beforehand to inform the luvvies that the federal money tap would be turned off the moment vaccination rates hit those numbers. Indeed, Mr Frydenberg went on to point out (clearly he’s been reading The Speccie) that it is impossible to eliminate a highly contagious virus such as the Delta strain of Covid and that ‘learning to live with the virus’ actually means being prepared to let people die of the virus.
It was of course ‘Deep Throat’ of Watergate fame who popularised the phrase ‘follow the money’ when it comes to unearthing political corruption. The greatest political corruption in Australia over the Covid period has been the ability of aggressively authoritarian left-wing premiers to use the blunt instrument of a total lockdown that decimates economies in the comfortable knowledge that their own livelihoods and those of their public servant acolytes and many of their supporters will be financed by a seemingly endless supply of money courtesy of the federal government. This obscenity has made a mockery of the concept of federation. Whereas natural competition between the states was intended to ensure that those which performed best would attract the most investment and indeed people and businesses to move to them, the unnatural scenario where the worst performers received the most federal cash has ensured the worst premiers have thrived. Much of the blame for this perversion of the intention of federalism must surely rest with the creation of the idiotic ‘National Cabinet’, which entrenched and validated this abuse of state power and taxpayers money.
.
The mood of the electorate is now shifting dramatically and the battle lines of the next federal election are being drawn. The party that offers a credible path to freedom will win. The heavy hand of endless lockdowns should be to Labor what Chris Bowen’s franking credits were at the last election: if you don’t want permanent lockdowns, don’t vote for Labor.
.
Thus, it was instructive as well as encouraging to see pro-coal Labor man Joel Fitzgibbon and wannabe-reheated-leader Bill Shorten forcing Labor leader Anthony Albanese into swiftly shifting more towards the Coalition’s new position. This echoes Mr Fitzgibbon’s recent success in nudging Labor however slightly and however implausibly on the issue of coal-mining.
.
The past fortnight has also seen a much-criticised but welcome rebranding of minority parties on the right, with Campbell Newman joining the Liberal Democrats and Craig Kelly taking over the leadership of Clive Palmer’s United Australia Party. Although the dangers of splitting the conservative vote can’t be ignored, the simple reality is that these manoeuvres do galvanise disgruntled voters and in doing so do influence public debate and ultimately the focus groups upon which the two main parties so obviously rely. Indeed, with first Pauline Hanson’s One Nation and Craig Kelly then Campbell Newman and the Liberal Democrats all demanding a decisive end to lockdowns, it’s telling that the federal government finally starts talking about a firm timetable to do so. Focus groups rule.
.
Our advice to the Prime Minister and his Treasurer would be to combine their twin-strategy into one clear and firm Freedom Day deadline. Freedom from lockdowns, freedom from fearmongering and freedom for the taxpayer from financing lockdowns.
.
Solitary pleasure
.
The 1970s hit comedy Yes Minister relished in poking fun at the absurdities of bureaucratic diktats. But even the inventors of that brilliant show would have baulked at some of the pronouncements coming out of modern Australian governments during the era of authoritarian lockdowns and statewide restrictions. We won’t spoil the fun for you, but prepare for a hearty chuckle reading Mark Latham’s column in this week’s issue.