Dan Andrews is an avowed communist. For him & his ilk, it was never about human rights or human life. It was always about power.

Unvaccinated Victorians will be ‘locked out’ of venues

Unvaccinated Victorians will be prevented from going to “many venues” once the state reopens and the COVID-19 vaccine threshold has been met. 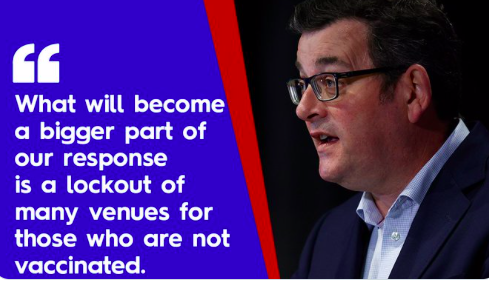 Premier Daniel Andrews warned Victorians that once the state reached its 80 per cent target of double dose vaccinations, unvaccinated people would unlikely be able to enjoy freedoms such as attending events – including sporting matches and even going to restaurants and pubs.

This has to stop:

Australia Traded Away Too Much Liberty

Even the extreme left Atlantic is getting a bit queasy about the situation down under:

How long can a democracy maintain emergency restrictions and still call itself a free country?

The nation’s high court struck down a challenge to the country’s COVID-19 restrictions. “It may be accepted that the travel restrictions are harsh. It may also be accepted that they intrude upon individual rights,” it ruled. “But Parliament was aware of that.” Until last month, Australians who are residents of foreign countries were exempt from the rule so they could return to their residence. But the government tightened the restrictions further, trapping many of them in the country too. 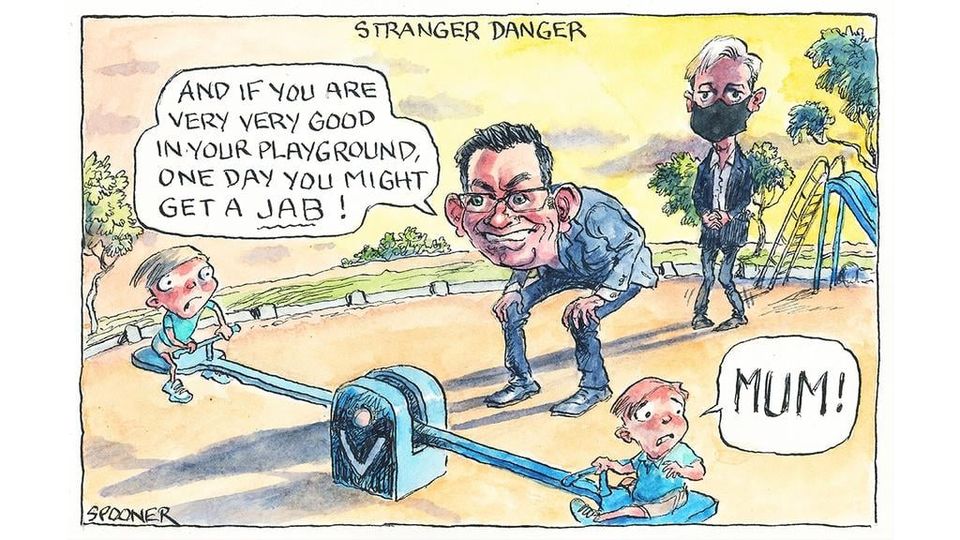 Intrastate travel within Australia is also severely restricted. And the government of South Australia, one of the country’s six states, developed and is now testing an app as Orwellian as any in the free world to enforce its quarantine rules. People in South Australia will be forced to download an app that combines facial recognition and geolocation. The state will text them at random times, and thereafter they will have 15 minutes to take a picture of their face in the location where they are supposed to be. Should they fail, the local police department will be sent to follow up in person. “We don’t tell them how often or when, on a random basis they have to reply within 15 minutes,” Premier Steven Marshall explained. “I think every South Australian should feel pretty proud that we are the national pilot for the home-based quarantine app.”

Other states also curtailed their citizens’ liberty in the name of safety. The state of Victoria announced a curfew and suspended its Parliament for key parts of the pandemic. “To put this in context, federal and state parliaments sat during both world wars and the Spanish Flu, and curfews have never been imposed,” the scholar John Lee observed in an article for the Brookings Institution. “In responding to a question about whether he had gone too far with respect to imposing a curfew (avoiding the question of why a curfew was needed when no other state had one), Victorian Premier Daniel Andrews replied: ‘it is not about human rights. It is about human life.’”

In New South Wales, Police Minister David Elliott defended the deployment of the Australian military to enforce lockdowns, telling the BBC that some residents of the state thought “the rules didn’t apply to them.” In Sydney, where more than 5 million people have been in lockdown for more than two months, and Melbourne, the country’s second-biggest city, anti-lockdown protests were banned, and when dissenters gathered anyway, hundreds were arrested and fined, Reuters reported.

Australia is undoubtedly a democracy, with multiple political parties, regular elections, and the peaceful transfer of power. But if a country indefinitely forbids its own citizens from leaving its borders, strands tens of thousands of its citizens abroad, puts strict rules on intrastate travel, prohibits citizens from leaving home without an excuse from an official government list, mandates masks even when people are outdoors and socially distanced, deploys the military to enforce those rules, bans protest, and arrests and fines dissenters, is that country still a liberal democracy?

Read: New Zealand’s prime minister may be the most effective leader on the planet

Enduring rules of that sort would certainly render a country a police state. In year two of the pandemic, with COVID-19 now thought to be endemic, rather than a temporary emergency the nation could avoid, how much time must pass before we must regard Australia as illiberal and unfree?

To give Australia’s approach its due, temporary restrictions on liberty were far more defensible early in the pandemic, when many countries locked down and scientists understood little about COVID-19’s attributes or trajectory. Australian leaders hoped to “flatten the curve” of infection in an effort to prevent overcrowded hospitals and degraded care, and the higher death rates that would follow. The country was also betting that, within a time period short enough that restrictions could be sustained, scientists would develop a vaccine that protected against morbidity and mortality.

As it turned out, the bet paid off. Had it behaved rationally and adequately valued liberty, a rich nation like Australia would have spent lavishly—before knowing which vaccines would turn out to be most effective—to secure an adequate supply of many options for its people. It could afford to eat the cost of any extra doses and donate them to poorer countries. Australia then could have marshaled its military and civil society to vaccinate the nation as quickly as possible, lifted restrictions more fully than Europe and the United States did, and argued that the combination of fewer deaths and the more rapid return to normalcy made their approach a net win.

Instead, Australia invested inadequately in vaccines and, once it acquired doses, was too slow to get them into arms. “Of the 16 million doses of the AstraZeneca vaccine that have been released to the government by manufacturer CSL, only about 8 million have gone into the arms of Australians,” The Age reported on August 21, citing concern about blood clots and a widespread preference for the Pfizer vaccine. “A further 1.6 million doses have been sent offshore to help regional neighbours such as Papua New Guinea, Fiji and East Timor tackle COVID-19. But about 6 million doses are yet to be used, even as more than half the nation is in lockdown due to outbreaks of the highly infectious Delta variant.” Australia’s low infection and death rates, which the country achieved both by being surrounded by water and by adopting harsh restrictions on liberty, seemed to sap its urgency when it came time to vaccinate—even though that lack of urgency meant months more of basic human rights being abrogated. In hindsight, more urgency to get jabs in arms to end the restrictions would have saved lives, because the country would have been better protected against the unexpected Delta variant.

In return for trading away their liberty, Australians gained a huge safety dividend. COVID-19 has killed 194 of every 100,000 Americans, 77 of every 100,000 Israelis, and only four of every 100,000 Australians. That low death toll is a tremendous upside. What remains to be seen is whether Australia can maintain that performance without permanently ending core attributes of life in a liberal democracy, including freedom of movement, peaceable assembly, and basic privacy.

Read: Where the pandemic is cover for authoritarianism

If the country quickly reinstates its citizens’ pre-pandemic liberties, it can argue that the loss of liberty was only temporary (though some restrictions, such as a prohibition on leaving the country, would still seem needless if the goal was minimizing the spread of COVID-19 in the country). And if Australia’s death rate remains lower than Israel’s or America’s, Australian leaders can plausibly tell their citizens that the deprivation was worth it. If not, supporters will have a much harder time defending a record that includes handcuffing a small group of teenagers after they gathered for an outdoor hangout.

More important than whether or not the past can be justified is what the country does from now on. Promising murmurs are coming from some politicians. “New South Wales state Premier Gladys Berejiklian vowed to reopen the state once 70% of those 16 and older get vaccinated,” Reuters reported Sunday. “No matter what the case numbers are doing … double-dose 70% in NSW means freedom for those who are vaccinated.” But in Victoria, the country’s next-most-populous state, the news organization reports that “Premier Daniel Andrews said his state’s lockdown, due to end on Thursday, will be extended, but would not say for how long.”

Because of its geography, Australia is a neighbor and an observer of authoritarian countries as varied as China and Singapore. But its own fate, too, may turn on whether its people crave the feeling of safety and security that orders from the top confer, or whether they want to be free.

Conor Friedersdorf is a California-based staff writer at The Atlantic, where he focuses on politics and national affairs. He is the founding editor of The Best of Journalism, a newsletter devoted to exceptional nonfiction.

One thought on “Covid Terror DownUnder: Australia Traded Away Too Much Liberty”