The large Facebook group Ivermectin MD Team just got taken down today – 31,000 members! Many doctors on that forum (which was originally started by doctors) discussing their own clinical experience treating Covid patients with IVM & other early treatments. Now banned.

PLEASE realize there is literally a global war on ivermectin. If it didn’t work, you wouldn’t see this level of heinous ferocity trying to kill it. I worry so few realize what has happened to US society. They are literally trying to kill us for $$$$$

The feds have set aside a $75 million compensation fund, including payment of burial expenses, for people who passed away from the shot 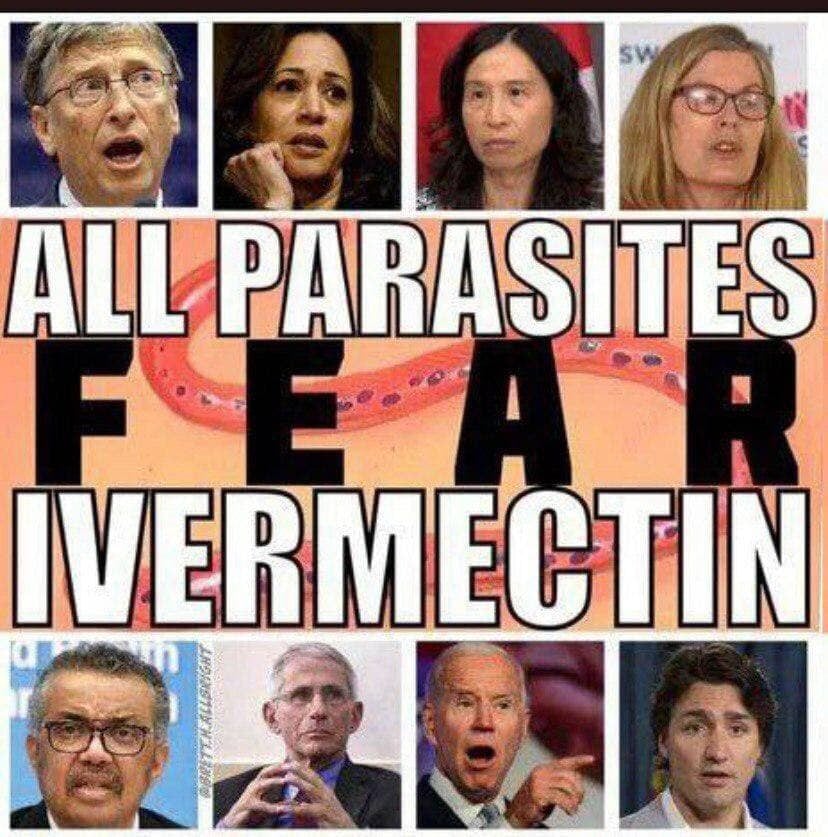 Ivermectin  is essentially an anti parasitic medicine.
No wonder  parasites are so terrified of it.
.

Despite warnings from health authorities about the effectiveness of a particular drug to cure Covid-19, Australians are unwilling to give it up.

Charis Chang is a Chinese propagandist for the vaxx lobby. She agitates against Ivermectin with loaded language:

Thousands of complaints have been received in Australia from people unhappy about restrictions on the supply of unproven Covid-19 treatment ivermectin.

A spokesman from the Therapeutic Goods Administration told news.com.au that since banning general practitioners (GPs) from prescribing ivermectin for uses outside those approved by the TGA — including for the treatment of Covid-19 — it had received “a significantly larger than normal number of phone calls and emails” from people objecting to the new rule.

It’s understood more than 3700 inquiries, including emails, letters and phone calls, have been received by the TGA since September 12, compared to about 200 that would usually be received.

The TGA has previously warned about the dangers of the ivermectin, which is used for the treatment of scabies and certain parasitic infections, after a ten-fold increase in Australians importing it.

The drug has been spruiked as a treatment for Covid-19 despite little evidence to support this.

In September the TGA banned GPs from prescribing it for uses outside of those specifically approved by the TGA, with only certain specialists now allowed to prescribe it for unapproved uses.

“Ivermectin is not approved for use in Covid-19 in Australia or in other developed countries, and its use by the general public for Covid-19 is currently strongly discouraged by the National Covid Clinical Evidence Taskforce, the World Health Organisation and the US Food and Drug Administration,” the TGA said.

The NSW Health Care Complaints Commission (HCCC) told news.com.au it had received complaints about the “use of, or misinformation related to, non-approved Covid treatments, including ivermectin”.

“These complaints relate to a range of registered and unregistered health practitioners,” the commission said in a statement.

“The complaints raise deep concerns at a time when vaccination scepticism and false expectations about alternatives can undermine the public health response to the serious health threats posed by Covid-19.” Ivermectin is a generic anti-parasitic medication that has not been proven to treat Covid-19. Picture: The Pulse

The HCCC said it was now working with other regulators including the TGA, Ahpra and other regulatory bodies, to address the issues raised in the complaints it had received on the misuse of the drug.

“As we do not wish to compromise our deliberations on these complaints we are unable to offer more specific detail at this time,” it said.

Desperate people ‘swindled’ out of millions

The move comes as drug companies in the United States face scrutiny over the huge profits they have made selling drugs like ivermectin and hydroxychloroquine to desperate patients looking for Covid-19 treatments.

According to hacked data provided to The Intercept, a network of health care providers pocketed millions of dollars selling drugs like ivermectin through online consultations.

It found that America’s Frontline Doctors, a right-wing group founded last year to promote pro-Trump doctors during the pandemic, was working with a small network of health care companies to create concern around vaccines, and to push people into investing in unproven treatments.

At least $15 million was reportedly spent by patients on consultations and medications combined, with some people paying exorbitant prices for drugs like ivermectin.

“Misinformation can be really powerful to swindle people into buying products,” Dr Kolina Koltai, who researches vaccine misinformation in digital communities at the University of Washington’s Center for an Informed Public, told The Intercept.

“America’s Frontline Doctors are able to scale this up massively.” Ivermectin has not been proven to be effective at treating Covid-19. Picture: Luis Robayo/AFP

Issues with use of ivermectin

Australians have also not been immune to misinformation being circulated online.

In September it emerged that a Covid-19 patient presented to Westmead Hospital’s emergency department with vomiting and diarrhoea – due to an overdose of ivermectin and other supposed Covid “cures” they ordered online.

“There’s no evidence to support the use of ivermectin to treat COVID-19. Don’t look for magic cures online, and don’t rely on what’s being peddled on the internet, because none of them work.”

Guardian Australia reported in September that ivermectin was also being spruiked to the NSW regional town of Wilcannia’s Aboriginal population, promising it would “get rid of Covid and prevent them from contracting it again”.

The TGA has previously noted issues with the use of ivermectin, including that doses of ivermectin being recommended in social media posts and other sources were “significantly higher” than what had been approved as safe for scabies or parasite treatment.

“These higher doses can be associated with serious adverse effects, including severe nausea, vomiting, dizziness, neurological effects such as dizziness, seizures and coma,” it said.

It said people may also be choosing to take the drug to prevent Covid-19 instead of getting vaccinated, and this could spread the virus throughout the community.

The TGA said there had been a three to four-fold increase in ivermectin prescriptions in recent months, and this had led to a shortage in the drug earlier this year for those who need it for scabies and parasite infections.

“It is believed that this is due to recent prescribing and dispensing for unapproved uses, such as Covid-19,” it said.

However, the TGA said there was now no current shortage of ivermectin in Australia.