Liberty is a mental illness?

Trusted scientists – who have been worshipped as god-like entities throughout the pandemic – faked information to help the government sell tyranny. 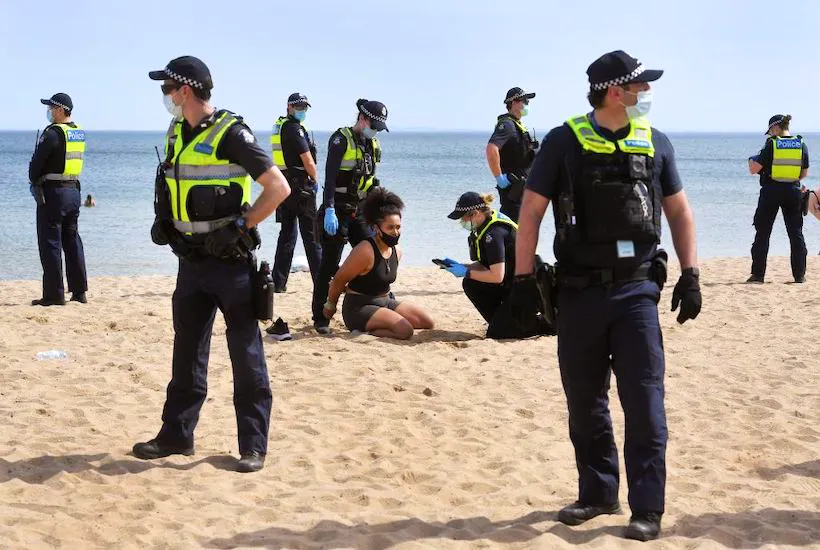 Academics are always lauding their moral superiority over us, but how often do we inspect what they think?

They are the faceless entities building our cages, whispering on the shoulder of power. If what they say changes the course of civilisation, we need to hear it. The Prime Minister’s National Cabinet and its nest of premiers have gone to great lengths to make sure we don’t…

To keep the science behind Covid health orders a secret, the Prime Minister has tabled legislation to bury National Cabinet’s machinations forever. This information is so dangerous – apparently – that its disclosure would violate the trust Australians have in their political class and jeopardise frank and honest discussions required to combat the pandemic — which is a weird position to argue from if your science is trustworthy.

If premiers were truly in possession of enlightened knowledge, why aren’t they parading it around to excuse their sustained violation of Australian law? Wouldn’t camera-hungry chief health officers want their captives to see them fight for tougher restrictions in their hour of glory? If the Australian public are not entitled to privacy during Covid to protect ‘the greater good’ – why are politicians building walls?

The only logical explanation is that the ‘science’ is shit.

Last week we discovered that the Victoria Department of Health referenced – almost solely – a Burnet Institute study on the effectiveness of mask-wearing which essentially flipped through a couple of photos taken by The Age.

Embarrassed, they issued a series of tweets defending the widely mocked paper. “Everyone is entitled to their views, but to publish a headline ‘it’s crap’ that is attributed to the unnamed scientist, is very disappointing and unprofessional,” insisted the Burnet Institute.

Anonymous or not, the review was right. Their study was crap and it never should have been anywhere near government policy let alone sitting at the centre as justification for a mask mandate. Who were the geniuses inside the government that decided to use it – or are we witnessing a group of desperate politicians grasping at soggy paper straws to support their actions?

Incompetence on this scale should result in an apology and some very public sackings, but neither academia nor the bureaucracy is ever held accountable. The Burnet Institute is the tip of the iceberg. Covid is drowning in rubbish ‘expert’ data that has about as much value as letting your three-year-old drag lipstick across the wall.

In amongst the laughable studies, we have a far more sinister truth emerging. The Victorian President of the Australian Medical Association casually suggested that the unvaccinated should opt-out of the public health system and ‘let nature run its course’ if they get Covid.

Then, an article in Britian’s Daily Telegraph revealed that members of the Scientific Pandemic Influenza Group on Behaviour weaponized fear to make people more compliant with health orders because people did not feel ‘sufficiently threatened’ by Covid.

“The [UK] government was very worried about compliance and they thought people wouldn’t want to be locked down. There were discussions about fear being needed to encourage compliance, and decisions were made about how to ramp up the fear,” said one of the scientists. “The way we have used fear is dystopian. The use of fear has definitely been ethically questionable. It’s been like a weird experiment. Ultimately, it backfired because people became too scared.”

It is an admission that these trusted scientists – who have been worshipped as god-like entities throughout the pandemic – faked information to help the government sell tyranny. They played mind games with the public from a position of authority backed up by social media oligarchs. Fear doesn’t have an off switch, nor can the social damage be fixed with an apology. Once it gets into society, it rots through to the core.

The UK is meant to be a shrine to liberty, democracy, and Western civilisation – so how did a depraved experiment in fear-based propaganda become the basis for political power? There is no sign of this trend stopping, with Boris Johnson stepping from Covid to climate change in his constant drip-feeding of terror. Fear is how dictators wield power, and the whole Western world has become addicted to it.

At least the UK scientists acknowledged what they’d done.

Australian experts continue to scare adults and their zero-risk children to the point of psychosis. This relentless marketing campaign leaves taxpayers funding their own tormentor. We are at the point where previously sane people publicly cheer on a two-tiered class system and demand that the government destroy the lives of their neighbours – not for ‘safety’ but to punish them for disobeying.

Friendships and families have been broken apart, while hardworking, law-abiding people have lost their jobs. The unvaccinated face an uncertain future with no hope of employment or access to education. Is the government prepared to make Australians live on the street to prove a point? How far will secretive science take politicians in their quest for 100% subscription to what is technically a medical trial?

When Daniel Andrews warned Victorians that he wasn’t going to let them ‘wait him out’ it became obvious that Andrews was playing a game with Victorians, not endorsing fact-based policy. He has since sworn to lock the unvaccinated out of the economy until late into 2022 with no regard for the men and women under his care. Daniel Andrews needs to remember that it is not his economy, it belongs to the people.

The Labor Party are not the only ones relying on time to break people down into compliance. Many were stunned by the sheer gall of New South Wales Premier Dominic Perrottet when he announced $130 million for mental health. At the same press conference, he denied that extended lockdowns were to blame for the declining state of mental health in his state. Instead of more money for the bureaucracy, why not end the medical apartheid which is causing mental deterioration in the first place? People don’t want counsellors – they want to be treated like human beings.

Nothing destroys the soul like poverty, and yet our politicians continue with destructive policies which are almost as heartless as the letters Scott Morrison has been sending to citizens insisting that mandatory vaccinations are fake news. There is no other way to say it; Morrison is a liar. He is toddling around with his eyes closed hoping no one notices that he is the one with all of the power and none of the backbone required to protect Australians from their own government.

This level of cruelty is extraordinary for a country famed as laid-back and welcoming.

What other research studies are our politicians revering as sacred texts? One might be the ‘To comply or not to comply? A latent profile analysis of behaviours and attitudes during the COVID-19 pandemic’ published by the School of Psychology at the University of Sydney.

The study came to the conclusion that those who resisted Covid health orders (non-compliants) and expressed support for ‘freedom’ tended to be extroverts of lower agreeableness and intellect, exhibited amoral ideology, used maladaptive coping strategies during Covid (such as watching TV or working), had a low view of government truthfulness, and used substances (like drinking alcohol).

“The non-compliant group scored higher on reactance, indicating they are more likely to perceive rules as a threat to their freedom and thus resist them. Consistently, the non-compliant group reported looser cultural norms and higher amorality. A ‘loose’ culture is characterised by valuing freedom, hence is less accustomed to strict social norms as those imposed during the pandemic,” said the study.

“Alarmingly, the non-compliant group were more likely than the complaint group to leave their home in the following week to meet friends/family, for religious reasons, because they are bored, or to exercise their right to freedom.”

The paper aimed to be the first of its kind to explore complex patterns of compliance with health orders during the 2020 first wave of Covid. It was designed to pinpoint the non-compliant during a pandemic and help the government target them with media campaigns.

“Although it is difficult to change a psychological trait, to increase compliance, the self-centredness of certain manifestations of trait extroversion may need to be targeted, as they present a health risk factor to others…”

The lofty claims of the study fall apart when you realise it only contained 1575 participants heavily weighted toward being young and female drawn from the UK, US, Canada and Australia. They filled out an online survey that relied on them self-reporting psychological and physical data which was never independently confirmed.

‘Intelligence’ was tested with a few junior school maths problems, while ‘right-wing authoritarianism’ was described as encompassing support for tradition, control, and willingness to submit to authority. Amorality was simply a response to ‘I hate obligations and responsibilities of any kind’ – which is a pointless question if you’re asking the Millennial youth.

The researchers struggled to make sense of their data. Like so many Covid research papers, it was founded on a false premise which rendered its results useless.

The study assumed that the official government response to the pandemic was irrefutably correct. Instead of accepting that a wide range of people disputed this and adapted their Covid response accordingly, anyone who engaged in behaviour that questioned, critiqued, or failed to accept this had to be doing so because of a negative cluster of personal attributes or experiences.

This view that resistance is wrong and must be rooted out of society is a scary place for academia to sit.

Covid researchers have stopped investigating the truth, and started helping the government find ways to expand the levels of propaganda that dominate our lives.

If the end goal is compliance instead of science – no amount of logic will suffice.

Alexandra Marshall is an independent writer. If you would like to support her work, shout her a coffee over at Ko-Fi.