When gov’t officials promise you privileges for good behaviour you might be living in a prison.

“What we have seen in this crisis is that civil rights and liberties have been transformed from fundamental rights to privileges that governments grant or revoke as they see fit.”
.

An FDA adviser has said, “We’re never going to learn about how safe this [Pfizer] vaccine is unless we start giving it [to children]. That’s just the way it goes.”

There were encouraging signs from Europe last week when at least four Members of the European Parliament (MEP) went rogue and publicly rebuked the European Union’s COVID-19 passports.

Speaking for the group, at a news conference in Strasbourg, Romanian MEP Cristian Terhes said, “We were elected by the people, but we should not forget that we are elected here for the people…” 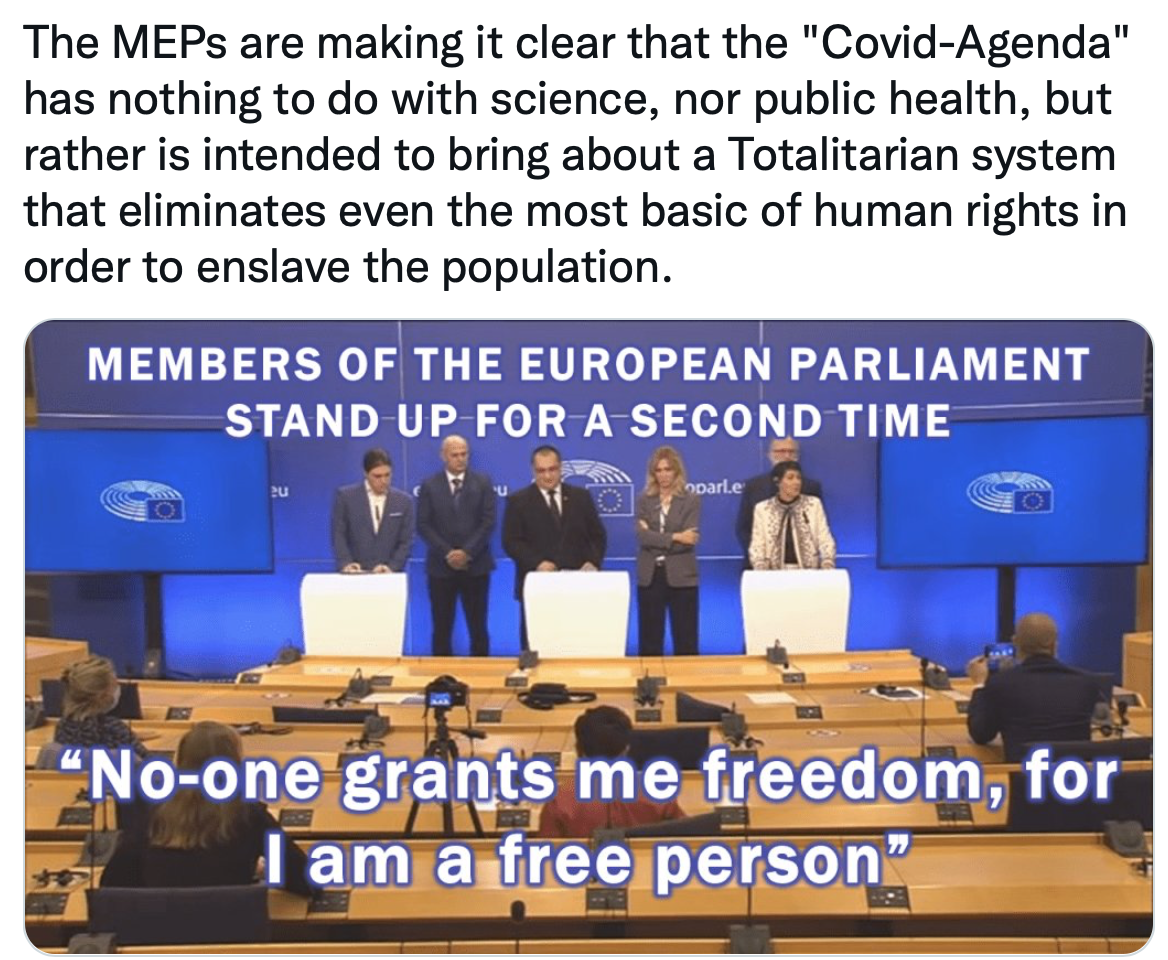 “Have you told these people in the parliament when you decided to strip their fundamental rights why you have done it? You see we have all this treaty – as my colleague said – no medical treatment should be imposed on you, unless you decide about it, freely, and under informed consent.”

He called the “vaccine” passports (known as Green Certificates) “a violation of freedom.”

The people, Terhes argued, have no informed consent, they don’t get to choose “what they want to be vaccinated with or tested with.”

“There’s another aspect to this,” he continued. “The question that is addressed not only to you in the parliament, but to every European citizen. Ask your own government, were you properly informed about what is going on?”

The rebel MEP Romanian said, “We had a lot of debates at the beginning of this year in the parliament where we demanded full access to the contracts signed between these companies that produce the vaccines and the European Union.”

What they got in return, Terhes explained, was “redacted format, after the [pharma] company agreed to open the contract to scrutiny.” (According to Terhes this was only after the company was pressed hard on the matter.)

Terhes then applied the heat to the puzzling Big Pharma response.

“So, you’re imposing a medical product on the European citizens without them knowing what’s in this contract? Not only them knowing, but we don’t know [either].”

Holding up the redacted report, which had sentences, and some pages completely blacked-out, he said:

“You tell me if this is okay for the European citizens to be exposed to? This situation, where they cannot come to work. They cannot enter a store. They cannot go with their kids to schools; where they cannot freely move from one country to another [un]less [someone] is vaccinated with one of these products.”

He added, “You call this transparency? […] Why aren’t they open with the people and fully transparent, so we all know what is going on?”

It’s pertinent that a Romanian representative is one of the few speaking out against the infringement on human rights.

Romanians, like all Eastern European countries, who lived like slaves under the Marxist heel of the Soviet Socialist Empire, have first-hand experience with organised state thuggery, and its inhumane, elitist despotism.

Speaking from this context, Terhes stated:

On behalf of the breakaway dissenters opposing “vaccine” passports, and “vaccine” mandates, he asserted:

“We are here for you and we will fight for you. I know many of you are struggling all across Europe, and many of you working for the European institutions are struggling right now, but look, as a former U.S. president said, ‘freedom liberty is one generation away from extinction.’ We live that type of time right now. It’s our duty, and our call to fight for liberty.”

The press conference was downplayed by Reuters in a Fact Check.

They took more effort in telling the world that only a “small” number of MEPs voiced opposition to “Green certificates” (a digital COVID certificate), than reporting on what was actually said, and why the members said it.

In 2019, the leftist rag called him ‘one of the most dangerous new MEPs in the European parliament’, after his election in 2019.

VICE’s big problem with Terhes is that he’s a Christian, a politically conservative social reformist, and a (‘non-leftist’) Social Democrat, who openly opposed to the 2SLGBTQAAI+ ideology, particularly same-sex “marriage.”

Terhes is also a member of the centre-right, Christian Democratic National Peasants’ Party, re-founded after the fall of the Iron Curtain in 1989.

Marking the event, he posted on Twitter, “EU citizens’ rights are severely violated by the Digital Certificate. We will fight for your right to freedom, which has to be restored in the EU!”

EU citizens' rights are severely violated by the Digital Certificate. We will fight for your right to freedom, which has to be restored in the EU! Full Press Conference 28.10.2021 https://t.co/WDryDuiCXD

In an October 22 press release, Terhes called on Europeans to stand up to “any government trying to take away freedom, civil rights and liberties!”

He condemned the misuse of “vaccine” passports, stating, “What we have seen in this crisis is that civil rights and liberties have been transformed from fundamental rights to privileges that governments grant or revoke as they see fit.”

Terhes, and those who stand with him, understand that civil liberties are being replaced with “prisoner privileges.”

The government is using the threat of losing those privileges to force compliance with a “fall-in, line-up, goose-step in unison and salute, or else,” Globalist prison.

Like Communist China, privileges will be issued on the basis of someone’s social credit score. Rights will be rationed out by degrees of loyalty to the regime, and its ideology.

One recent example of this is a push from The Greens in Australia to replace free speech, with what they call “fair speech.”

This all sounds “nice,” until you read the fine print. They get to decide what’s fair and what’s not.

Governed by the fickle whim of the ruler, not the rule of common law, compliance will win the public lesser restrictions, not more freedoms.

Cristian Terhes speaks for a growing number of people who see how important it is to distinguish between doing the “right thing” and doing what’s “nice.”

Popularity, as A.W. Tozer once wrote, does not always equate with excellence. Being good is often not the same as being nice.

If honest, common-sense politicians, along with a strong majority fail to seize the day and oppose these mandates, the propaganda, and the nonsense Public Health Orders, history, when it recalls this era, will tremble at the sound of that silence.

Just as we do, when we recall Winston Churchill’s reprimand of those, who with blind obedience, assisted in the rise of stoppable tyranny.

In his “Iron Curtain Speech” Churchill stated, there never was a war easier to prevent than World War Two.

“I saw it all coming and cried aloud to my own fellow-countrymen and to the world, but no one paid any attention […] no one would listen and one by one we were all sucked into the awful whirlpool. We surely must not let that happen again.”

Once this corrupt political hegemony is through with those of us standing against the gathering storm, they’ll come for the cosy, middle-class privileged lifestyle that the silence of many is trying to protect.