Hotspots like Victoria need to be understood in their proper light: as a test run, by our dark overlords, to see just how far they can push us and how much they can get away with.

The bad news is that they can get away with rather a lot.

Why are vaccinated people now being advised to get an Aids test?

Are we now classed as HIV hesitant?

According to Liberals, Democrats, and the media – honking is DANGEROUS but burning cities and looting is JUSTICE.

Treatment for Omicron is paracetamol, but you need 3 jabs to fly into Victoria?

Five years ago, I became the first Premier to walk in Pride March. Haven’t missed a year since – because LGBTI Victorians are worth celebrating.

The Brisbane school threatened to expel students whose parents didn’t sign, or who identified as gay or transgender.

They will not stop until homosexuality is mandatory.

Now this is hatred:
Some SOB calling himself “Satansson” using the image of a child to vilify ScoMo because he doesn’t force Homo Promo onto Christian Schools.
Their ideas of “inclusion” is destruction, plain and simple. 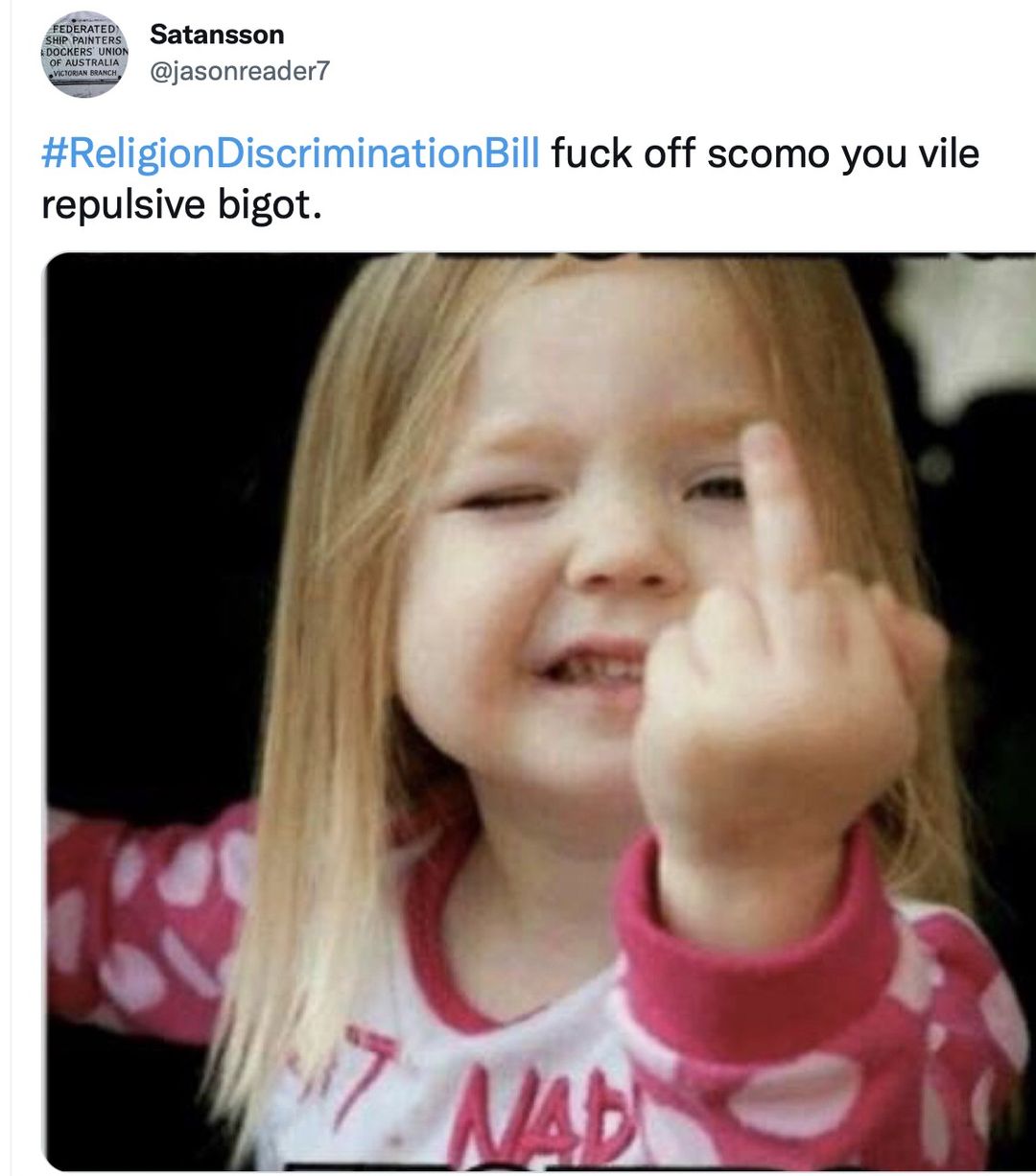 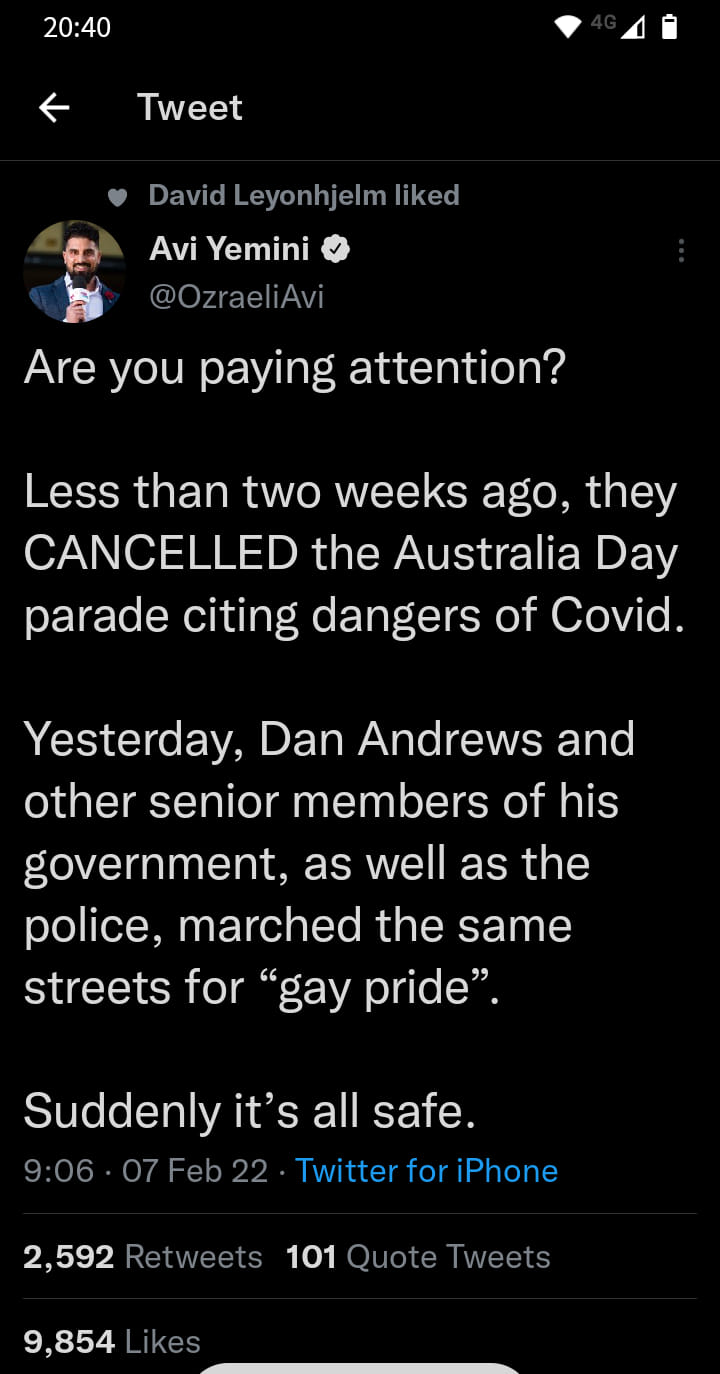 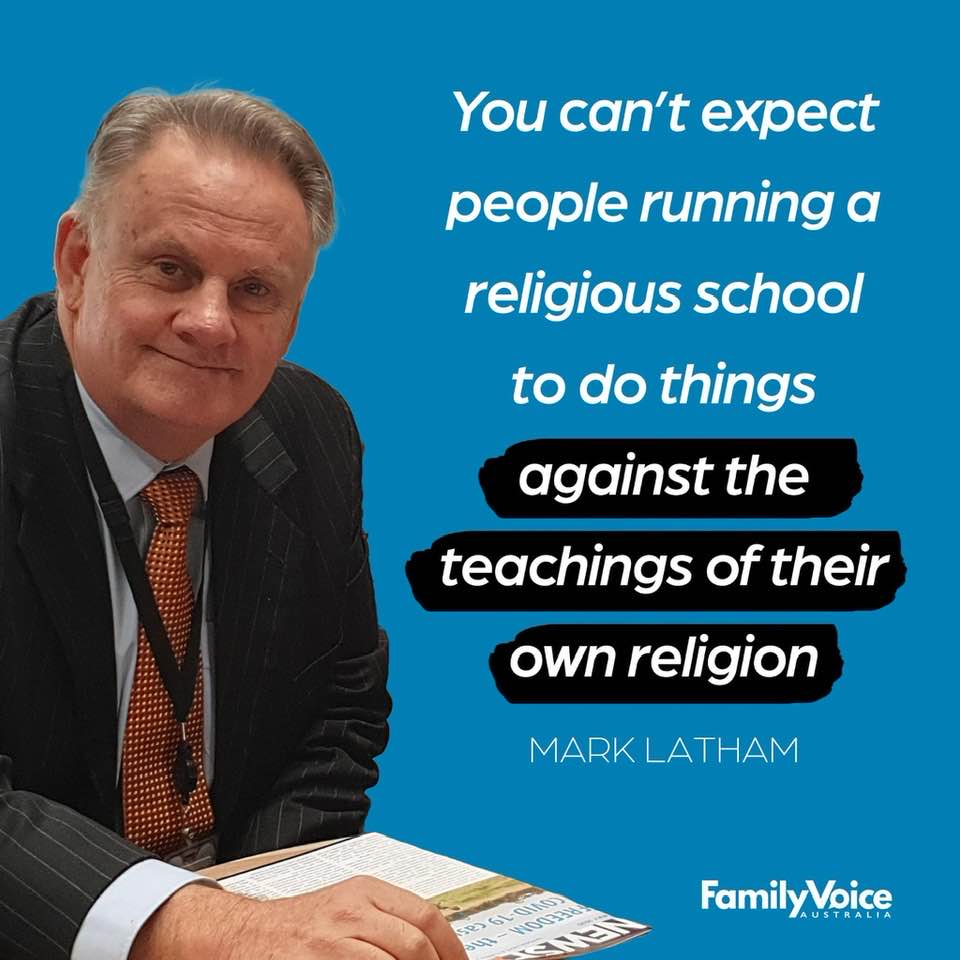 “The Age of #COVID19 is increasingly being referred to as ‘medical fascism’ because it embraced collectivist thinking. All manner of civil abuses were permitted in pursuit of puritanical health orders…” – Alexandra Marshall 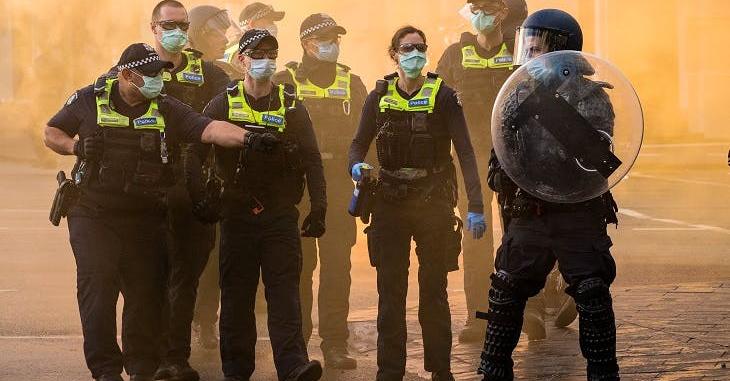 When civilisation gives up on moral principle and decides to try out ‘moral outcomes’ it leads the government to view individuals as subservient to the collective. Their rights and safety can be ignored so long as the ‘greater good’ is being served. Once the individual is no longer sovereign, any group desire can justify the abuse of rights until citizens become nothing more than depersoned identities. This is the idea that sits at the heart of every collectivist regime and we have seen it quietly gaining popularity within a range of activist movements. 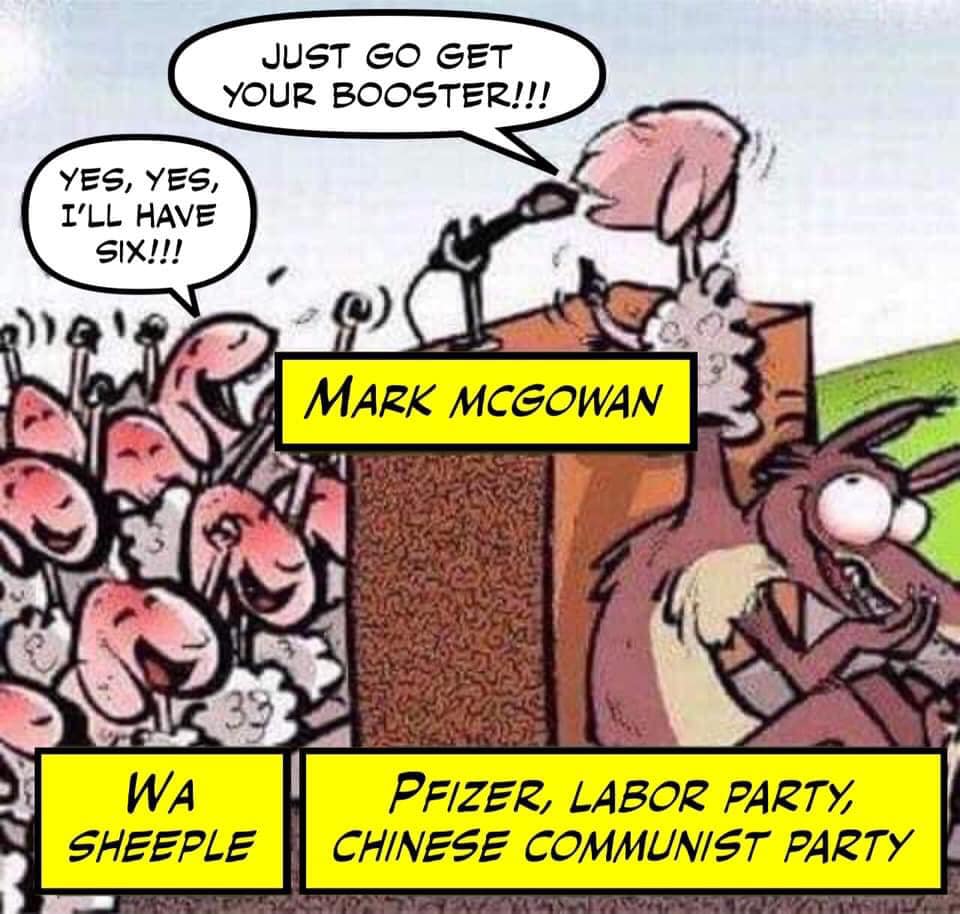 If you have to ‘weaponize freedom’ at least admit that the state has ‘institutionalized tyranny’.

The alt-right has weaponized ‘freedom’ to undermine democracy

THE TRUCKERS DID IT!

The HONKING has won! 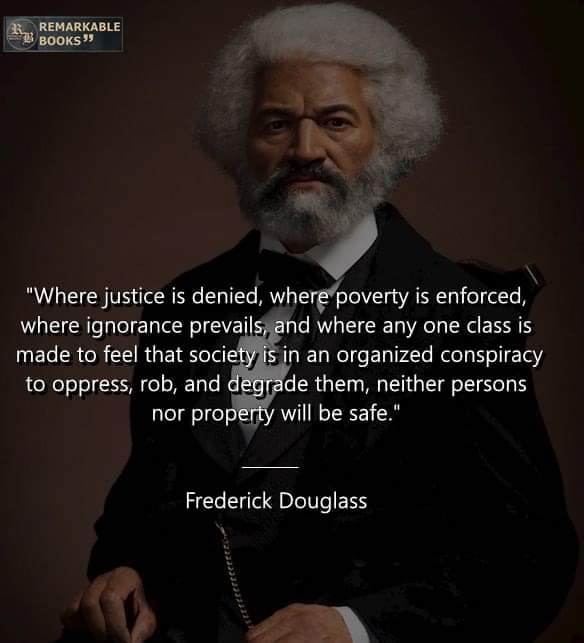 Brace yourself for the battle of the hot cross bun

The entire religious freedom debate currently underway in Australia is a sham. A farce. A mockery.

The key ingredient of almost anyone who has commented on it is stupidity.

And I use the word ‘almost’ in a purely hypothetical sense. I acknowledge it is possible that someone, somewhere has said something useful. But I haven’t heard it yet.

Let’s leave aside rainbow activists and the media and the politicians and just look at the dumbest of the dumb: the Christians.

Christian churches and activists and lobby groups and legal experts (including all these within the Catholic Church) are currently running around building their own guillotine. The Religious Discrimination Bill will destroy what remains of Christianity in Australia’s institutions and will unleash hell on Christian Australians.

That is certain. It is an outcome of which we can have zero doubt.

And you don’t need to be Einstein to work it out.

Let’s go back to the start of this debate.

It all kicked off when the Commonwealth decided to do the impossible: make a law equating two inherently contradictory things as being the same thing.

So it legalised ‘gay marriage’ which is an oxymoronic term befitting the collective intelligence of the people who sit in our nation’s halls of power. And as part of that process it was deliberately decided that absolutely no action whatsoever should be taken to protect Australian Christians from the inevitable attacks that would come for them as a result of this revolution against marriage and the natural law.

In fact, the Ruddock Religious Review was launched precisely to kick the can of ‘religious freedom’ down the road. That should be clue one as to what this is all about and it’s a pretty bloody big one.

For the second clue, I refer to the Australian Human Rights Commission and the New South Wales Anti-Discrimination Board.

You have probably noticed that these two organisations are among the primary reasons Australian Christians are already having a hard time. Guess what? The ‘high priestesses’ of these ‘temples of thought police’ are the architects of our proposed religious discrimination laws.

That is a fact.

Christ warned of wolves in sheep’s clothing. And we’ve been sucked in by wolves in wolves’ clothing. That’s how dumb we are.

There is no better example of the moronic stupidity of Christians than the fact that they are clamouring for these people to be put in charge of what they can and can’t do. This is the Australian Human Rights Commission at work:

To put it another way, the very activist bureaucrats who are currently doing all they can to eradicate Christianity are about to be vested with the coercive powers of state to regulate Christian religious expression and activity in Australia. Thanks for nothing, ScoMo.

The so-called Christian experts who claim these laws are moderate and necessary and helpful and will work are either undercover agents or wilfully blind.

The best way to describe how anti-discrimination laws work in Australia is by analogy.

The child also has eight smaller tubes of each of these colours, representing the various state and territory discrimination laws.

And then the painting begins. You all know what happens next. Within minutes you get an unholy mess and one crappy colour.

No one knows where or how each individual colour was mixed, just as no one can know how the courts will determine how the various state and Commonwealth discrimination laws will interact.

But in both cases, the poo-coloured results are entirely predictable from the start. And now our conservative government has stepped in and given the kid a big blue tube and promised us all a masterpiece.

Yeah, right. Smoosh a big blob of blue into a kid’s finger painting and you’ll only deepen the hue of shizen.

It is impossible to solve the problem of anti-discrimination law by adding new layers to it. The only solution is to scrap it altogether.

Instead, we are about to be foisted with a law that will make it uncertain if the Our Father can be said at Anzac Day services, or if Australia Post can sell religious Christmas stamps or if the little crosses on the little crowns on every Army uniform in Australia are discrimination.

If you are exhausted by the transgender bathroom wars unleashed because of the various sex discrimination laws, brace yourself for the battle of the hot cross bun. It’s coming. And one of Australia’s leading legal academics cannot be certain if it would be unlawful for Coles to ask an employee to put a cross on what may soon be called an ‘Autumn Fruit Roll’.

The real legacy of the Religious Discrimination Bill is that it will see Christianity ‘risk-managed’ out of Australian life.

I don’t know any Australian couple with two kids and a mortgage and a lawn to mow and a sick parent who is remotely interested in the cultural division this law will unleash. But they will be made to suffer through it.

And I don’t know why any Christian would think this law is a good idea. But Christian lobbyists are promoting this fast-approaching train wreck.

Their insanity is burning bright for all to see: our Prime Minister has already promised that the Religious Discrimination Bill will protect gay teachers at Christian schools and the deal to get it through involves further weakening of ‘protections’ for these schools in the existing Sex Discrimination Act.

In other words, once the Religious Discrimination Bill is passed there will be less freedom for Christians in Australia than now. Like I said, thanks for nothing ScoMo.

All the problems outlined above will be the consequences of this proposed law. They are inevitable because of its very nature. I have focused on them because they are easier for most people to see and understand than the core philosophical problem with the Religious Discrimination Bill.

The real issue is far more serious. The Religious Discrimination Bill pretends truth does not exist, that there is no God and that all religions (including no religious belief at all) are of equal value, equally good and equally deserving of government recognition and protection.

It’s a full-frontal governmental attack on reality. It attempts to impose a delusional, nightmarish fantasy. It makes it difficult to do good and impossible to avoid evil.

There is a God. There is only one true religion. Evil should not be placed on an equal pedestal with good.

If Australia wants true religious freedom, it needs to recognise Christ the King and his one, holy, catholic and apostolic Church. Then the state has a logical and cohesive framework to tolerate false religions to the extent that they do not undermine the common good.

Until that happens, every single effort to resolve this problem will fail and Christians will only find themselves further enslaved by a godless government.

Previous articles on this topic: