Are you paying attention?

Less than two weeks ago, they CANCELLED the Australia Day parade citing dangers of Covid.

Yesterday, Dan Andrews and other senior members of his government, as well as the police, marched the same streets for “gay pride”.

Did Scott Morrison throw freedom of religion under the bus? | The Spectator Australia 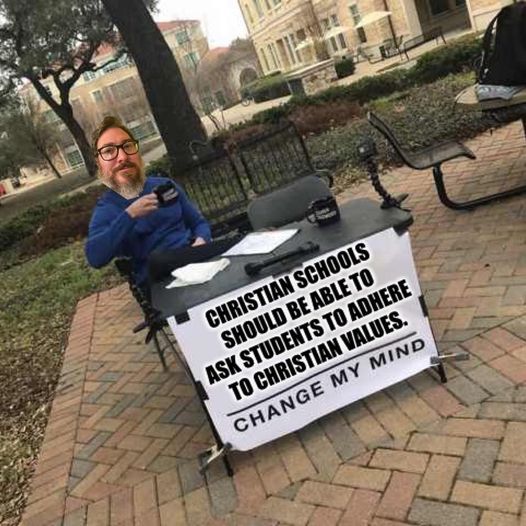 A Christian school valiantly tries to uphold the Christian (and scientific) view of gender. It attempts to defend the Christian ethos for human sexuality which was the consensus in the West until five minutes ago in history.

In less than a week, Christian parents are thrown under the bus by a Christian Prime Minister, Scott Morrison, and his Christian education minister, Stuart Robert.

The Citipointe Christian College enrolment contract controversy marks the beginning of the end of Christian education in Australia.

Why are we constantly bombarded with this garbage?

Parents wanting to preserve their children from harmful gender-fluid ideology – which takes them by the hand to doctors experimenting on them with chemicals, hormones and surgery – will now have to teach them in underground academies or at home.

Our Christian Prime Minister was this morning unwilling to defend a Christian community’s right to teach that sex is for one man and one woman in the bonds of holy matrimony. That is now verboten, it seems, in modern Australia.

It has only taken four years since a Liberal government facilitated a change in the legal definition of marriage without providing protections for freedom of speech and religion.

On radio, Morrison did not even try and defend the idea of biological gender or tolerance for the Christian sexual ethic.

‘I don’t support that,’ he reportedly told the radio audience when asked about the enrolment contract.

I guess we shouldn’t be surprised. He didn’t stand up for Israel Folau or Margaret Court either.

‘My kids go to a Catholic school in Sydney and I wouldn’t want my school doing that either.’

Morrison then went on to confirm that his Religious Discrimination Bill would be watered down further to take away the right of Christian schools to uphold a Christian ethic on sexuality and gender.

‘One of the bills that we are going to be taking through to Parliament, we’ll be having an amendment which will deal with that,’ he said. ‘The law, as it currently sits, would allow for that, but that’s what I’m trying to change.’

Morrison seemed to be referring to calls by the Greens, Labor, and his ‘modern Liberals’ to remove the protection for freedom of religion in the Sex Discrimination Act.

‘Religious freedom isn’t just about people who have religion,’ Morrison said. ‘It’s also about people who don’t, and you shouldn’t be discriminated against by what your religious faith is or isn’t. And that’s what the Bill we’re trying to take through the parliament is all about. It actually protects and supports all Australians, whether they have faith or they don’t.’

These last four sentences are a word salad but I think it is pretty clear that they mean the end of tolerance for a Christian and scientific view of gender and the public expression of Christian moral values, even within schools established by Christian communities.

Morrison’s prayer partner, Robert – who is acting education minister while Alan Tudge is being investigated for allegations of sexual abuse arising from his affair with a staffer – was scathing of Citipointe Christian College.

‘It’s important we all understand that every Australian child has the right to go to school, and we are absolutely committed to ensuring that our anti-discrimination laws are met, and the community expectations are met,’ he said.

With respect, acting minister, no one disputes that.

This confected controversy is about whether or not Australians are free to establish institutions that teach their deeply held religious (and even scientific) values about sexuality and gender.

‘There is no reason why any school would ever want to not have a child come to their school, regardless, full stop,’ Robert said.

But why shouldn’t a Christian, Muslim or Jewish school be allowed to expel a boy who demanded to use the girls’ toilets?

‘I think the school needs to show a lot more grace,’ Robert said.

With respect, acting minister, you need to focus on protecting children from harmful ideologies.

That would be an ‘act of grace’. Until then, RIP Christian schools...

Lyle Shelton is Director of Campaigns and Communication for the Christian Democratic Party.