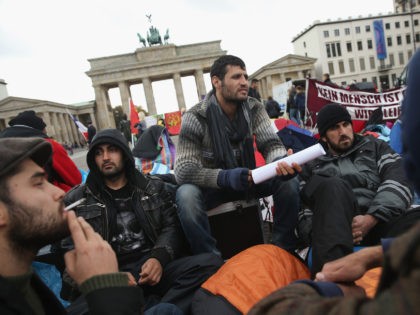 Perhaps more interesting to observers outside Hungary, however, will be his comments on the Central European country’s novel approach to controlling inflation by capping petrol prices at 480 forints (€1.32/$1.52) per litre and requiring food prices to be returned to October 15th 2021 levels and frozen for three months, and his rebuke to Germany’s new left-led coalition government’s stance on mass migration.

“[W]e don’t want to follow the West’s example in using the instrument with which it seeks to solve its population – or depopulation – problems: the import of immigrants… we don’t want to be an immigrant country,” the Fidesz leader told his interlocutor.

“There are countries in Western Europe like the German government that has just taken office and has written the following into its programme: ‘Germany is an immigrant country.’ I’d rather cut off my own hand than write such a sentence into any government programme,” he declared.

‘Everything We Feared’ — Incoming Leftist Coalition Govt in Germany to Push for a Federal EU Superstate https://t.co/I6bfSAodUP

Prime Minister Orbán emphasised that his government has pursued strong border controls and an extensive family support programme as an alternative to mass migration because, in his view, “replacing Hungarian children who aren’t being born with foreign adults is an absurdity” — and, moreover, “impossible!”

The veteran anti-communist activist also obliquely addressed the accusations of some right-wingers in Western Europe and North America that his support for families is socialistic, previously addressed by families minister Katalin Novak in an exclusive interview with Breitbart London.

“Ultimately behind all this it’s our deep conviction that if there are no children, there is no future. So we can live comfortably today, but what about tomorrow? Who will we leave the country to?” he asked, answering his own question by adding: “We want to leave the country to our children, not to strangers.”

Facing a largely unified opposition of Hungary’s leftist parties and even the far-right Jobbik as he attempts to earn a fourth consecutive term this year, like Germany’s now-former leader Angela Merkel before him, Orbán said his “personal objective” if returned to office would be to create an environment where “making the commitment to having children won’t harm someone’s financial situation, but improve it.”

That is, “in terms of monthly budgets [and] actual household expenditure” his government would try to make it so that “the situation of someone with two or three children shouldn’t be more difficult than it would be if they hadn’t had children.”

The Hungarian public head to the polls on April 3rd 2022.

Here’s an older blog entry just to show you the degeneracy of the EUSSR swamp:

All EU scum be cursed!

The Spanish migrant transport NGO Proctiva’s ship ‘Open Arms’ has been sea for eight days with about 160 migrants on board after it was denied to ports in Italy and Malta.
.

“The situation is serious and calls for immediate action,” Sassoli told Italy’s La Reppublica. He also claimed that if Europe refused to help the migrants then, “it will mean that it has lost its soul, as well as its heart”.

Nothing is more repugnant than the overpaid traitors of the EUSSR who facilitate population replacement in the guise of altruism.  When they talk about heart and soul they are actually murdering the natives.

In June of 2018, the governments of Italy and Malta have banned migrant transport vessels from docking at their ports unless other EU member states promise to relocate and take the migrants into their own country once they reach European shores.

So far, globalist technocrats in Brussels have been unable to persuade the Italian and Maltese governments to alter their positions on this issue. As of now, the Spanish NGO migrant transport ship is said to be about 29 nautical miles off the Italian island of Lampedusa.

Last week, the EU Commission sent a thinly veiled warning to Italy following its newly announced law which could see stiff penalties imposed on NGO migrant rescue boats in the Mediterranean, calling it a breach of EU rules.

The Commission said that it would  “analyze” the new laws to “verify whether it is compatible with European law,” a spokesperson for the bloc’s executive branch said.

The UN also voiced concern on Tuesday over a new Italian law, demanding that ‘humanitarian work’ not be ‘criminalized or stigmatized’.

Óscar Camps, the director of the NGO Proactiva, has formally appealed to the governments of Spain, Germany, and France to take in the migrants currently aboard their ship Open Arms.

So far, not one of the countries has responded to the request.

One thought on “Orban: ‘I’d Rather Cut Off My Own Hand’ Than Turn Hungary Into ‘Immigrant Country’ Like Germany…”