Tucker Carlson: Americans have been trained to hate Putin, and will suffer because of it

Since the day that Donald Trump became president, Democrats in Washington have told you it’s your patriotic duty to hate Vladimir Putin. It’s not a suggestion. It’s a mandate. Anything less than hatred for Putin is treason.

Even Biden admitted that energy prices are about to go up

Remember when libturds said President Donald J. Trump would start World War III? For four years, we had peace under Trump. Think about that. i don’t remember Putin ever calling me a white supremacist or shutting down my business for not getting a vaccine.

CNN and the BBC are reporting that Russian troops have entered Ukraine from neighboring Belarus.

The invasion of Ukraine is what happens when evil senses American weakness; Now on to China and Taiwan. 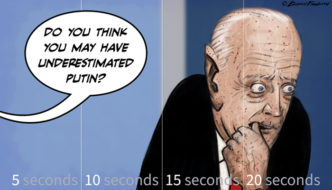 Awkward: Asked if He Underestimated Putin, Biden Stares Vacantly and Picks His Teeth

It’s one of the most awkward twenty seconds ever captured on video in a disastrous administration that lurches from one awkward moment to another: when asked “Do you think you may have underestimated Putin?,” Old Joe Biden first continued to stare in the general direction of the question, a slight smirk on his face, expression absolutely unchanged from what it had been before the question was asked. A few seconds later he turned his head to face the camera and, after a few more seconds, grinned sardonically. A few seconds later, he began picking his teeth with his thumbnail, and then grins a bit vacantly before the video mercifully runs out. Amid all the wrong choices, erroneous policies, abject failures, and stupid missteps of this disastrous administration, it was a trivial moment, but it was a telling one.

REPORTER to Biden: “Do you think you may have underestimated Putin?” 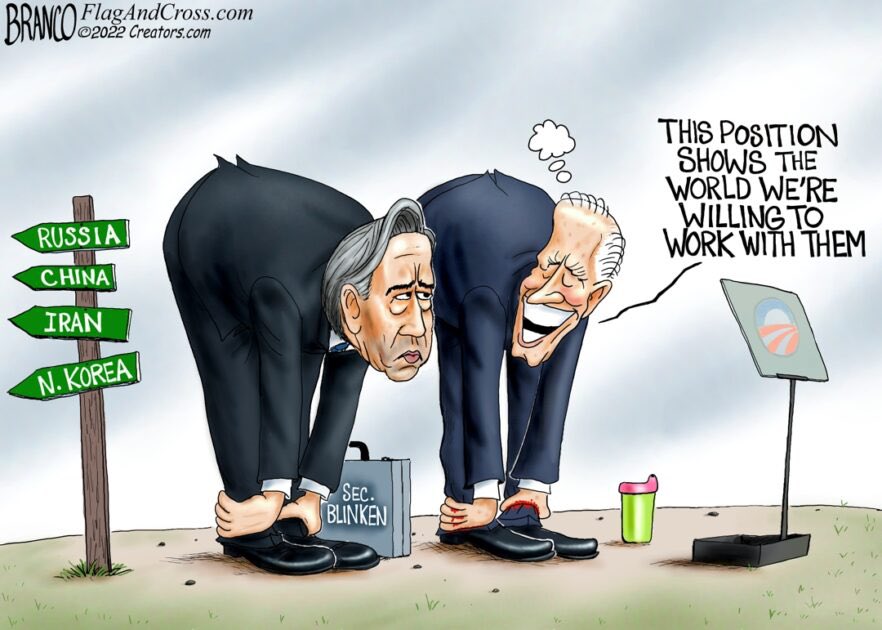 New York Times World
President Volodymyr Zelensky of Ukraine severed diplomatic ties with Russia as his country faced a wide-scale military attack. He spoke as one of his advisers announced that more than 40 Ukrainian soldiers had died and dozens were wounded.
.
This map from @ftgraphics shows how far-ranging Putin’s invasion of Ukraine is. Attacks everywhere from Ivano-Frankivsk in the west to Kharkiv on the Russian border. Incursions all across the north, including Belarus, and from Crimea. New troop presences detected.

The contact line has reportedly become the site of major clashes
Fierce fighting has broken out between Ukrainian forces and troops loyal to the breakaway republic of Donetsk, the spokesman for the separatist region’s militia announced on Thursday morning.

Look at ⁦@CNN⁩’s depth of history. 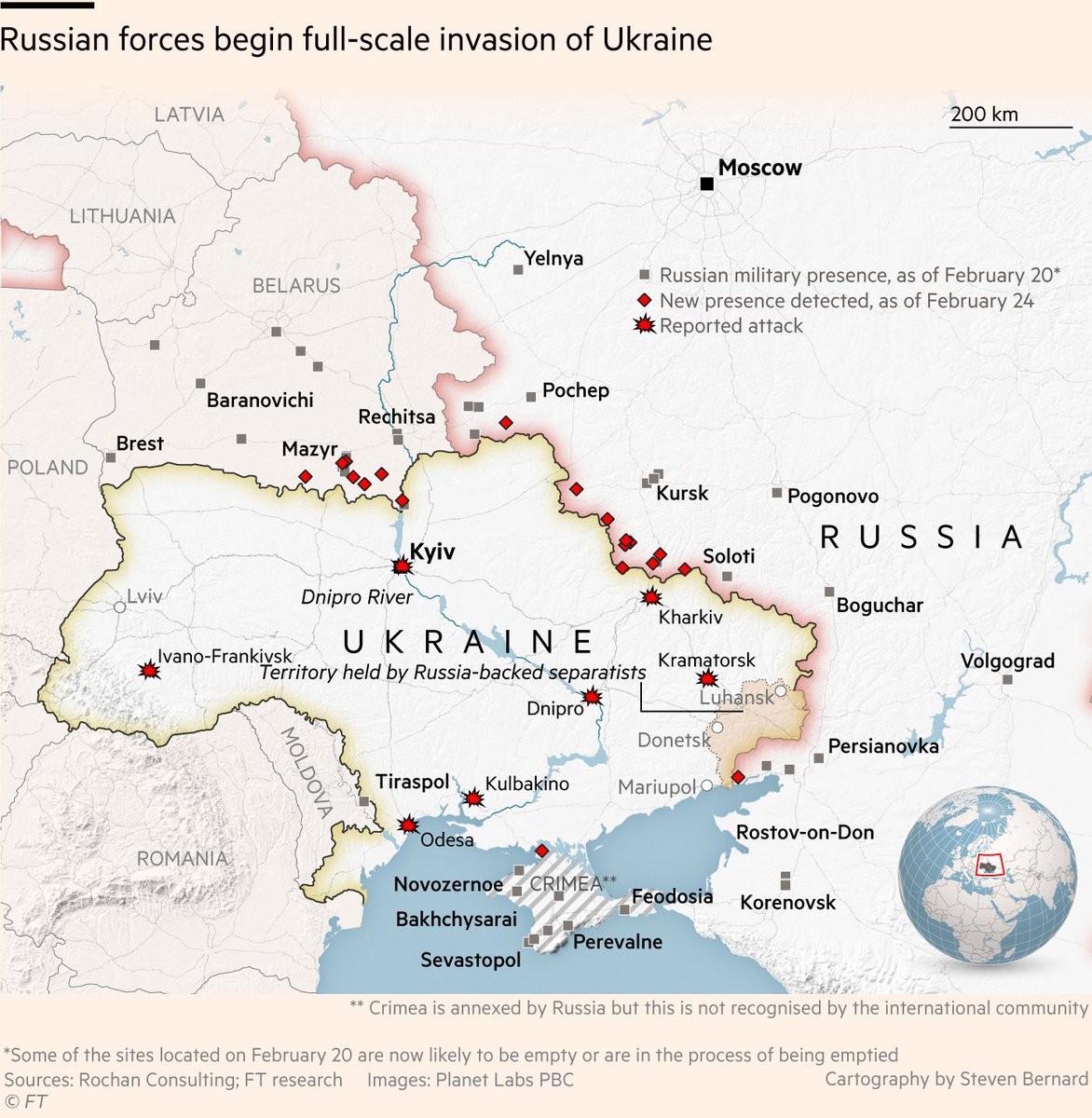 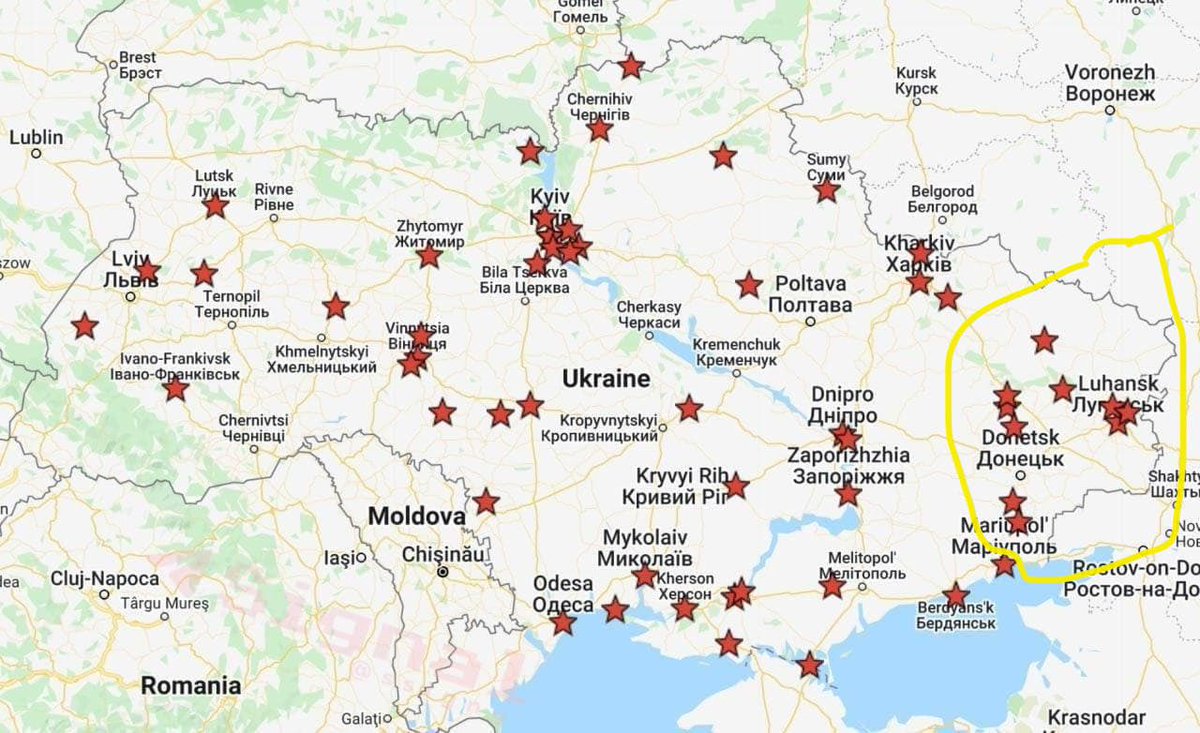 Many Americans have obeyed this directive. They now dutifully hate Vladimir Putin. Maybe you’re one of them. Hating Putin has become the central purpose of America’s foreign policy. It’s the main thing that we talk about. Entire cable channels are now devoted to it. Very soon, that hatred of Vladimir Putin could bring the United States into a conflict in Eastern Europe.

Before that happens, it might be worth asking yourself, since it is getting pretty serious: What is this really about? Why do I hate Putin so much? Has Putin ever called me a racist? Has he threatened to get me fired for disagreeing with him? Has he shipped every middle-class job in my town to Russia? Did he manufacture a worldwide pandemic that wrecked my business and kept me indoors for two years? Is he teaching my children to embrace racial discrimination? Is he making fentanyl? Is he trying to snuff out Christianity? Does he eat dogs?

These are fair questions, and the answer to all of them is no. Vladimir Putin didn’t do any of that. So why does permanent Washington hate him so much?

If you’ve been watching the news, you know that Putin is having a border dispute with a nation called Ukraine. Now, the main thing to know about Ukraine for our purposes is that its leaders once sent millions of dollars to Joe Biden’s family. Not surprisingly, Ukraine is now one of Biden’s favorite countries. Biden has pledged to defend Ukraine’s borders even as he opens our borders to the world. That’s how it works. Invading America is called equity. Invading Ukraine is a war crime.

So with every day, we move closer to some kind of conflict with Russia, a conflict that could easily spin out of control given that the people running us have no fine motor skills, the administration assures us this has nothing at all to do with ripping Joe Biden’s personal debts to Ukrainian oligarchs. Not at all. It’s completely and totally unrelated.

The point here is to defend democracy, not that Ukraine is a democracy. It is not a democracy. Ukraine’s president has arrested his main political opponent. He has shut down newspapers and television stations that have dared to criticize him. So in American terms, you would call Ukraine a tyranny. But Joe Biden likes Ukraine. So Putin bad, war good. How will this conflict affect you?

Will affect you quite a bit, actually. Energy prices in the United States are about to go way up, and that means that everything you buy will become much more expensive, from the food you eat to the car you drive to the tickets you need to take your family on vacation this summer, assuming you can still afford a vacation by then. You’re about to become measurably poorer. That’s not a guess. Joe Biden has admitted this.

On the other hand, you’re going to win an important moral victory against dastardly old Vladimir Putin, who is much, much worse than Justin Trudeau. Just so you know. So you can feel good about that because…because…let’s see, come to think of it, why would you feel good about that? It seems like a pretty terrible deal for you and for the United States. Hunter Biden gets a million dollars a year from Ukraine, but you can no longer afford to go out to dinner. That’s not a bargain.

So what are we missing here? What we’re missing is the big picture, and that’s why Joe Biden has dispatched Kamala Harris to explain that picture to us. Kamala Harris’ old job was to open America’s border. She did that. Her new job is to keep Ukraine’s borders closed. Kamala Harris was in Europe the other day to explain the whole thing. She began with a history lesson, letting the European peoples know about their recent past, which she assumes they’ve forgotten since so few of them speak English. She opened with a traditional salutation, “listen, guys,” because that’s the way real historians and states people talk. This is Kamala educating:

Listen, guys, you may be Europeans who live in Europe, but you don’t fully understand the ramifications of war in Europe. That’s your problem. The thing about Europe, you’ve had peace and security for more than 70 years. Kamala Harris just told the Europeans that.

And that, by the way, is true, if you don’t count the breakup of Yugoslavia, which caused hundreds of thousands of deaths in the 1990s or the Soviet occupation of half of the landmass, which you manage the enslavement of hundreds of millions. But apart from that, Mrs. Lincoln, it’s all been peace and security in Europe. Until now. The Soviets were fine. Vladimir Putin is bad.

What do we do about that? Kamala Harris explains that too.

KAMALA HARRIS: And the allied relationship is such that we have agreed that the deterrence effect of these sanctions is still a meaningful one, especially because, remember also, we still sincerely hope that there is a diplomatic path out of this moment and within the context then of the fact that that window is still opening, although open, although it is absolutely narrowing, but within the context of a diplomatic path still being open, the deterrence effect we believe has merit.

Got that. Take a breath and let it sink in. Here it is again: “we have agreed that the deterrence effect of these sanctions is still a meaningful one, especially because, remember also, we still sincerely hope that there is a diplomatic path out of this moment and within the context then of the fact that that window is still opening, although open, although it is absolutely narrowing, but within the context of a diplomatic path still being open, the deterrence effect we believe has merit.”