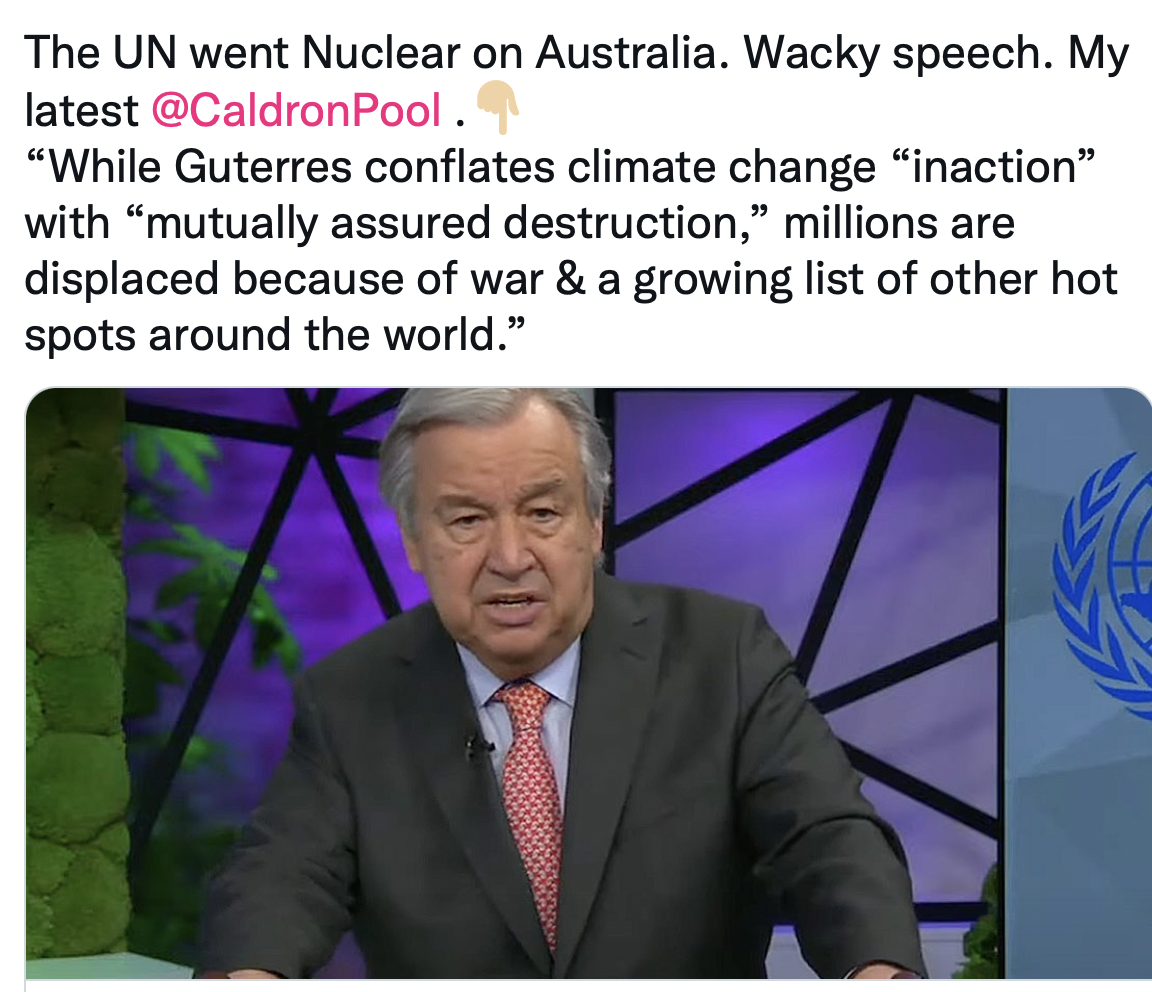 “Full of newspeak, Guterres’ speech is a glaringly obvious example of the UN’s utter irrelevance.”
.

United Nations Secretary-General, António Guterres, has accused Australia of “holding out” for refusing to rapidly phase out coal, by mandating a ban on anything, and everything coal-related.

The leader of the UN accused those supporting coal of “costing the world its climate goals”, stating, ‘the private sector still financing coal must be held to account.’

We have to get more coal over to Europe to help alleviate the leverage Russia has over them.. Coal prices are at record highs and we should be opening up our coal mines to take advantage of it.

The leader of the UN accused those supporting coal of “costing the world its climate goals”, stating, ‘the private sector still financing coal must be held to account.’

He then pushed for an “end [to] fossil fuel subsidies” and demanded a stop to “the expansion of oil and gas exploration.”

Guterres also demanded “enormous increases” in finances for the “net-zero and climate-resilient transition,” and spoke of increasing “public finance, blended finance and private finance,” in order to “unlock trillions [the] transition [from coal] needs.”

He then praised countries, like India, while advocating for an “even greater sense of urgency” in funding a global response to “climate change.”

In response, Australian Communications Minister, Paul Fletcher fired back, “The chattering classes of the UN can say what they want…we’re getting on with delivering outcomes.”

“The chattering classes of the UN can say what they want… we’re getting on with delivering outcomes.”

Communications Minister @PaulFletcherMP responds to the UN Secretary General calling out Australia for holding out on announcing emission reductions by 2030. pic.twitter.com/34s661us87

Bradshaw might be forgiven for overlooking the pending federal election.

Guterres was appealing to Australian voters and any political opportunists who may want to cash in on the UN Secretary General’s attempt to wack Scott Morrison over the knuckles.

From a political expediency perspective, there’s nothing strange, or striking about climate change cultists singling out an incumbent Australian government in an important election year.

Full of newspeak, Guterres’ speech is a glaringly obvious example of the UN’s utter irrelevance.

He claims to rest on science, yet replaces “natural disasters” with “climate disasters” – as if no one would notice.

This switch in the terminology appears to have permitted Guterres room to infer that 30 million people were displaced in 2020 by “catastrophic” climate change; adding that this was “three times more than those displaced by war and violence.”

This all seems to take energy and focus away from immediate, and long-term concerns about the human cost of war, COVID-19 government overreach, inflation, and surviving all three.

While Guterres conflates climate change “inaction” with “mutually assured destruction,” he ignores the danger of inflation and the infringement of civil liberties. As well as the displacement of millions because of war in Ukraine, Yemen, and a growing list of other hot spots around the world.

It would appear that the UN is more committed to seeking out compliance with the climate change catastrophising narrative, and its crystal ball modelling, than the UN is about ending, and mitigating wars – the sole reason for the United Nations’ existence in the first place.