Run for your life. It’s the biggest scam ever.

Why are Bill Gates, Prince Charles and Klaus Schwab, etc., threatening the World with more Pandemics if we don’t submit to their Great Reset?

In 5 days…Bill Gates will be flying to Davos to finalize the WEF/UN/WHO takeover of our Sovereign Nations.

Mary Holland… Bill Gates and Anthony Fauci have been planning to make the WHO the centre of a One World Government…🔥🔥🔥 pic.twitter.com/OMYmGmYyyB

Funny how they all cover for each other:

Fraudci is a crook. And he’s still raking it in. Big time. 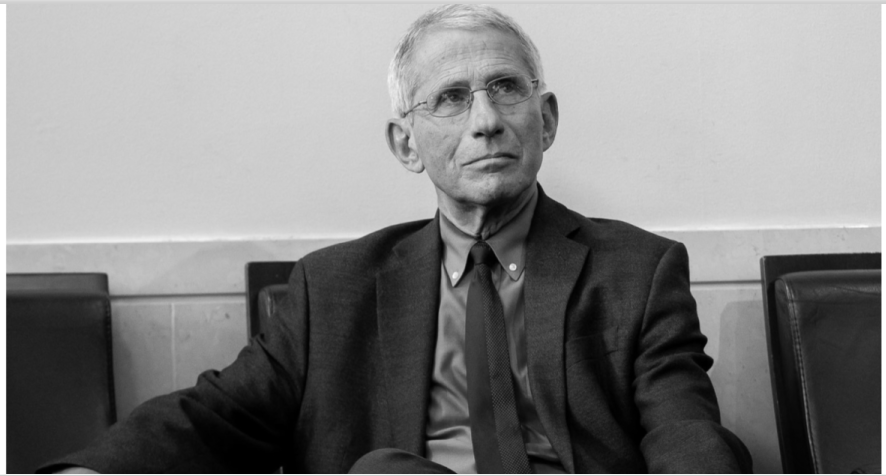 Last year, the National Institutes of Health — Anthony Fauci’s employer — doled out $30 billion in government grants to roughly 56,000 recipients. That largess of taxpayer money buys a lot of favor and clout within the scientific, research and healthcare industries.

However, in our breaking investigation, we found hundreds of millions of dollars in payments also flow the other way. These are royalty payments from third-party payers (think pharmaceutical companies) back to the NIH and individual NIH scientists.

We estimate that between fiscal years 2010 and 2020, more than $350 million in royalties were paid by third parties to the agency and NIH scientists — who are credited as co-inventors.

Because those payments enrich the agency and its scientists, each and every royalty payment could be a potential conflict of interest and needs disclosure.

Recently, our organization at OpenTheBooks.com forced NIH to disclose over 22,100 royalty payments totaling nearly $134 million paid to the agency and nearly 1,700 NIH scientists. These payments occurred during the most recently available period (September 2009 – September 2014).

The production is the result of our federal lawsuit against NIH. The agency admits to holding 3,000 pages of line-by-line royalties since 2009. So far, they’ve produced only 1,200 pages. The next 1,800 pages of production will cover the period 2015-2020.

However, what NIH has produced to date gives us insight into the undisclosed royalty largess. For example, only 900 scientists were estimated to be receiving royalties, so now we know the universe is much larger.

Since the NIH documents are heavily redacted, we can only see how many payments each scientist received, and, separately, the aggregate dollars per NIH agency. This is gatekeeping at odds with the spirit and perhaps the letter of open-records laws.

In the above examples, although we know the number of payments to each scientist, we still don’t know how much money was paid because the dollar figure was deleted (redacted) from the disclosures.

It’s been a struggle to get any useful information out of the agency on its royalty payments. NIH is acting like royalty payments are a state secret. (They’re not, or shouldn’t be!)

There is more. Much more. Read it all!

Bill Gates just put out a book calling for ongoing lockdowns, border closures and vaccines – to be developed by a centrally controlled WHO …

AUSTRALIA – Hello Australia, here’s Scott Morrison, agreeing he should hand over your hard fought for sovereignty to an unelected WHO, who’s largest funders are China and Bill Gates.

Totally worth your time to watch! #MMGA

As you can see below, the censoring scum already blocked it. You’re not supposed to know how dirty the DemRats are. 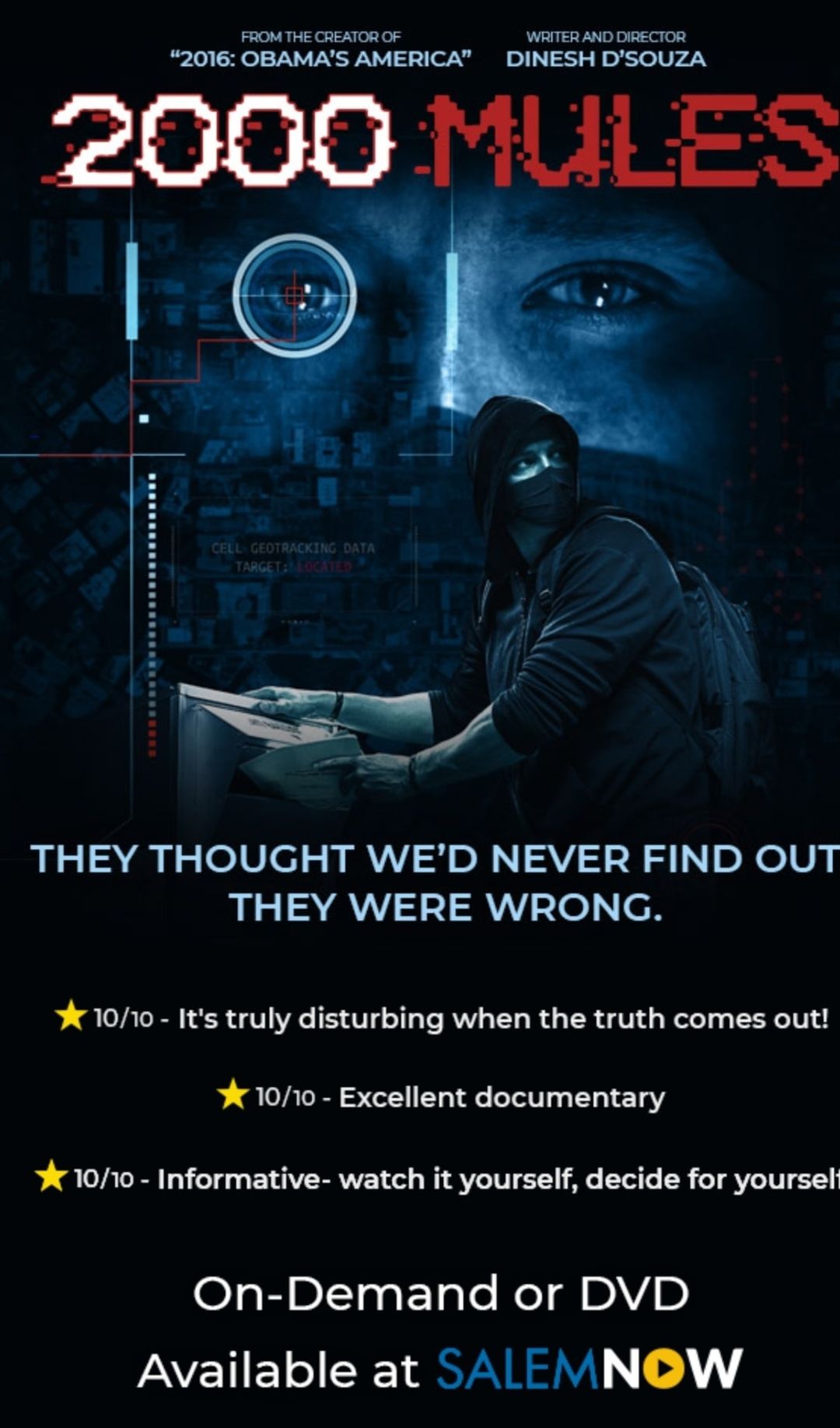 2000 mules is in 300 US theatres from Saturday May 7th.  It premiered last weekend to reviewers.

Thanks to JoAnne Nova

Instructions far below on how to watch it since it might be a while before Warner or Disney pick it up. Dinesh D’Souza has to reinvent a whole new way of distributing it.

Tierney: They have proof

I saw Dinesh’s movie “2000 Mules” last night. It provides massive evidence and concrete verifiable proof (digital & video) that the election was rigged. An informant from Arizona also detailed how she participated in the scheme and explained how it worked.

At the conclusion of the movie, two well-respected Salem radio hosts — Larry Elder & Dennis Prager — who have both vehemently DENIED voter fraud up to this point — were totally convinced that America was robbed — and ANGERED that they had been played. The theater applauded!

They have proof that the scheme took place in large counties in Arizona, Georgia, Pennsylvania, Michigan and Wisconsin. These are all states that President Trump won in 2016 but mysteriously flipped to Biden in the middle of the night in 2020.

The mules averaged 38 visits during the 2020 election, with an average of five ballots per visit. They were paid an average of $10 per ballot – and True The Vote could track them making multiple drops across county lines. The scary thing is that honest voters actually watched the thieves stuff ballot boxes and did nothing!

END_OF_DOCUMENT_TOKEN_TO_BE_REPLACED

How many spam bots does Twitter employ to rig the game?

20% fake/spam accounts, while 4 times what Twitter claims, could be *much* higher.

My offer was based on Twitter’s SEC filings being accurate.

This deal cannot move forward until he does. 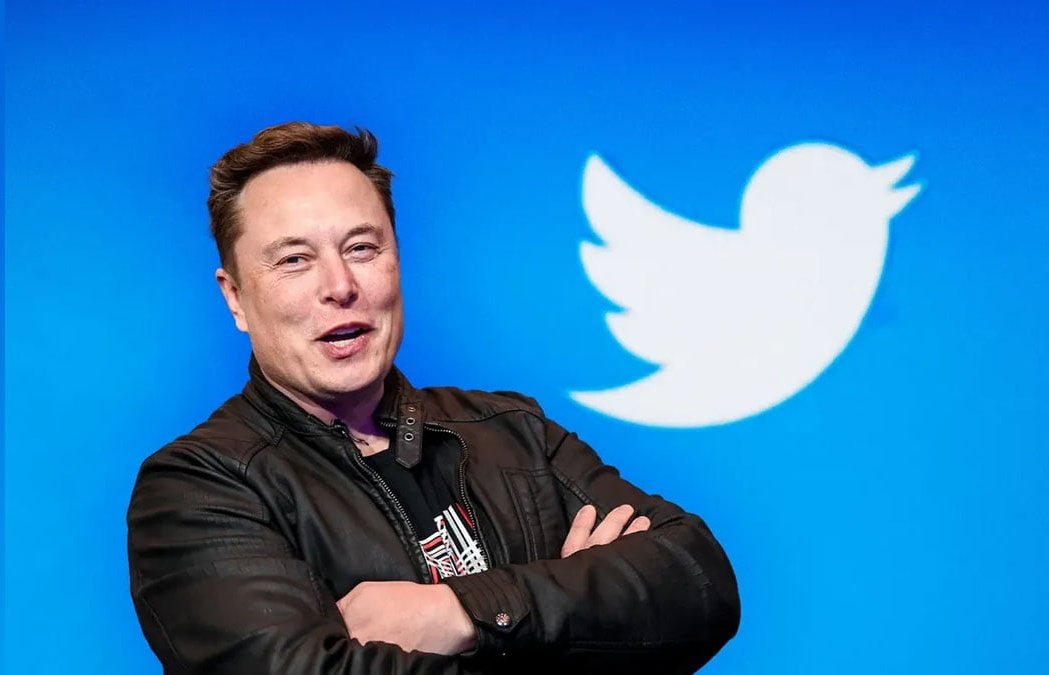 There are some very disturbing details coming from a Project Veritas expose about Twitter. It looks like @elonmusk is going to have his work cut out for him to save free speech on the platform. But if anyone is capable of making the necessary changes needed, it’s him.

Project Veritas released a new round of undercover footage highlighting the workplace culture of Twitter staff being antithetical to the mindset incoming owner Elon Musk has for the company's future.https://t.co/wNOFqyFrQA 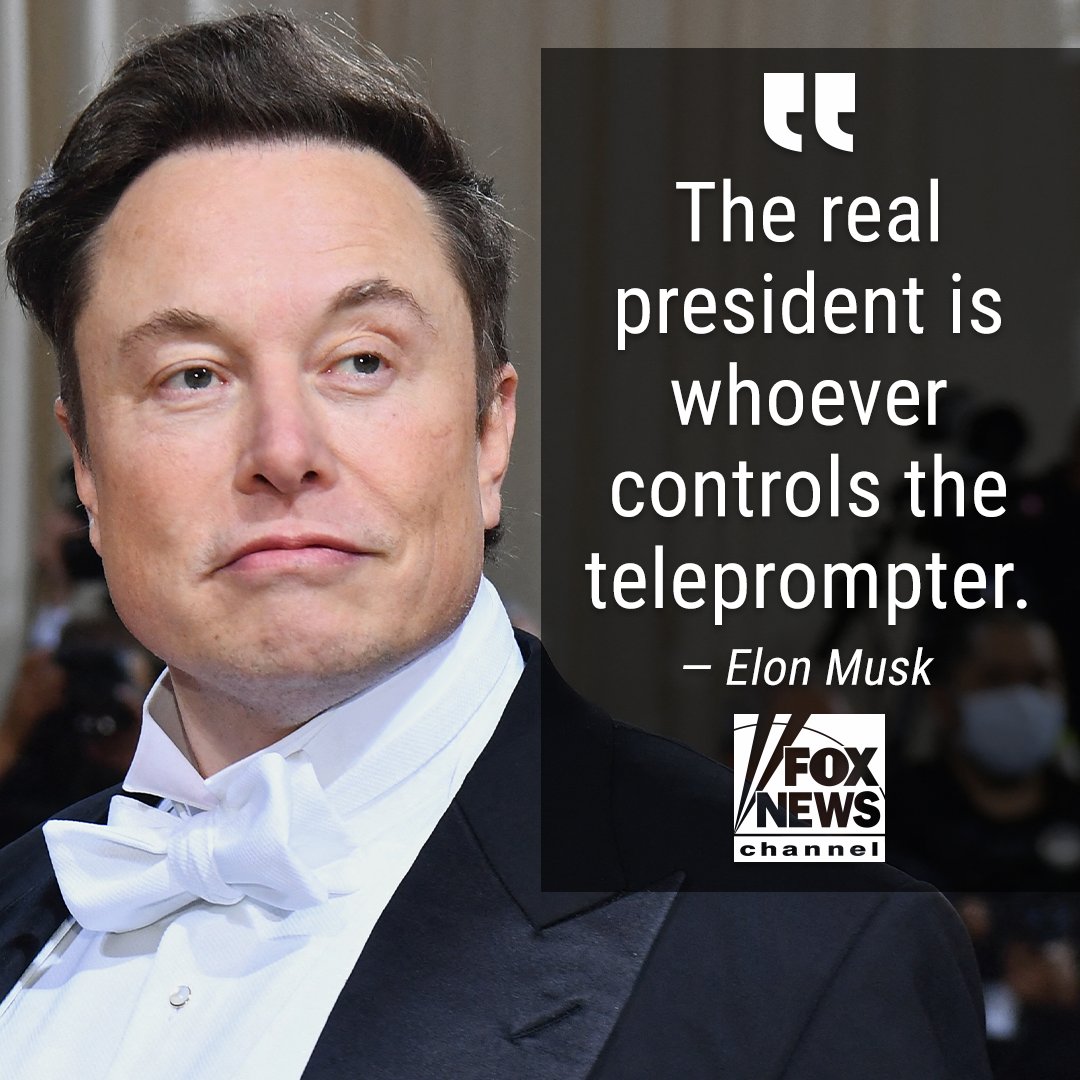 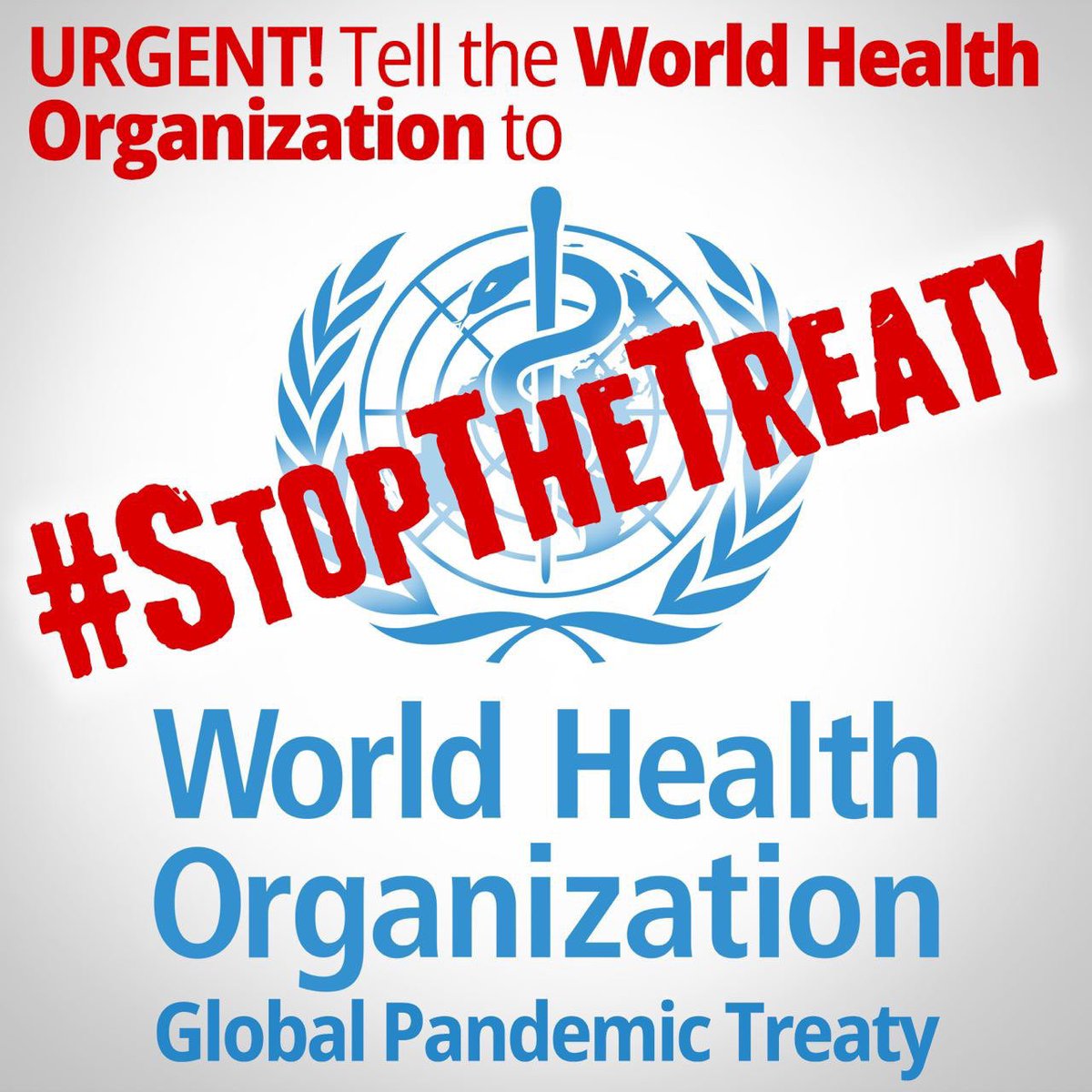 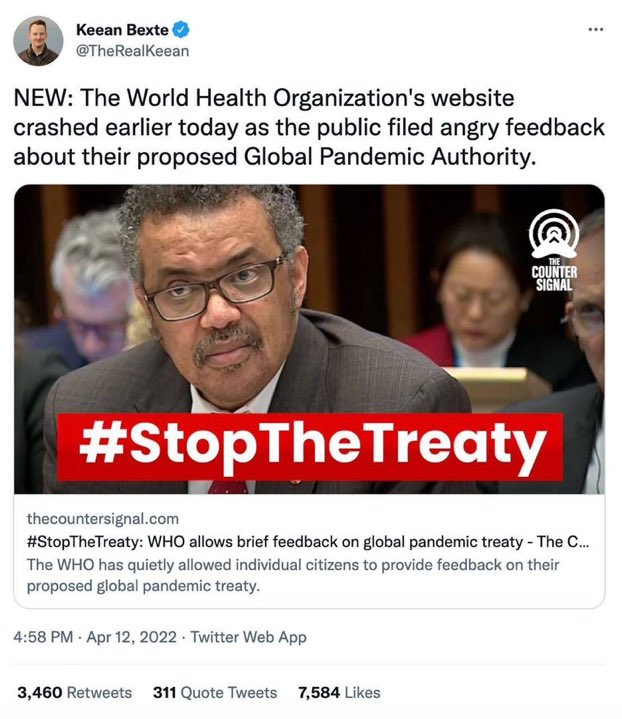 A new survey suggests that Australian voters coerced into #covid19 vaccination by health orders have abandoned the major parties and intend to put their vote in 'Freedom Friendly' minor parties. 77% said that they felt ‘extremely pressured’ into the jab.https://t.co/jzVYi3AyHQ 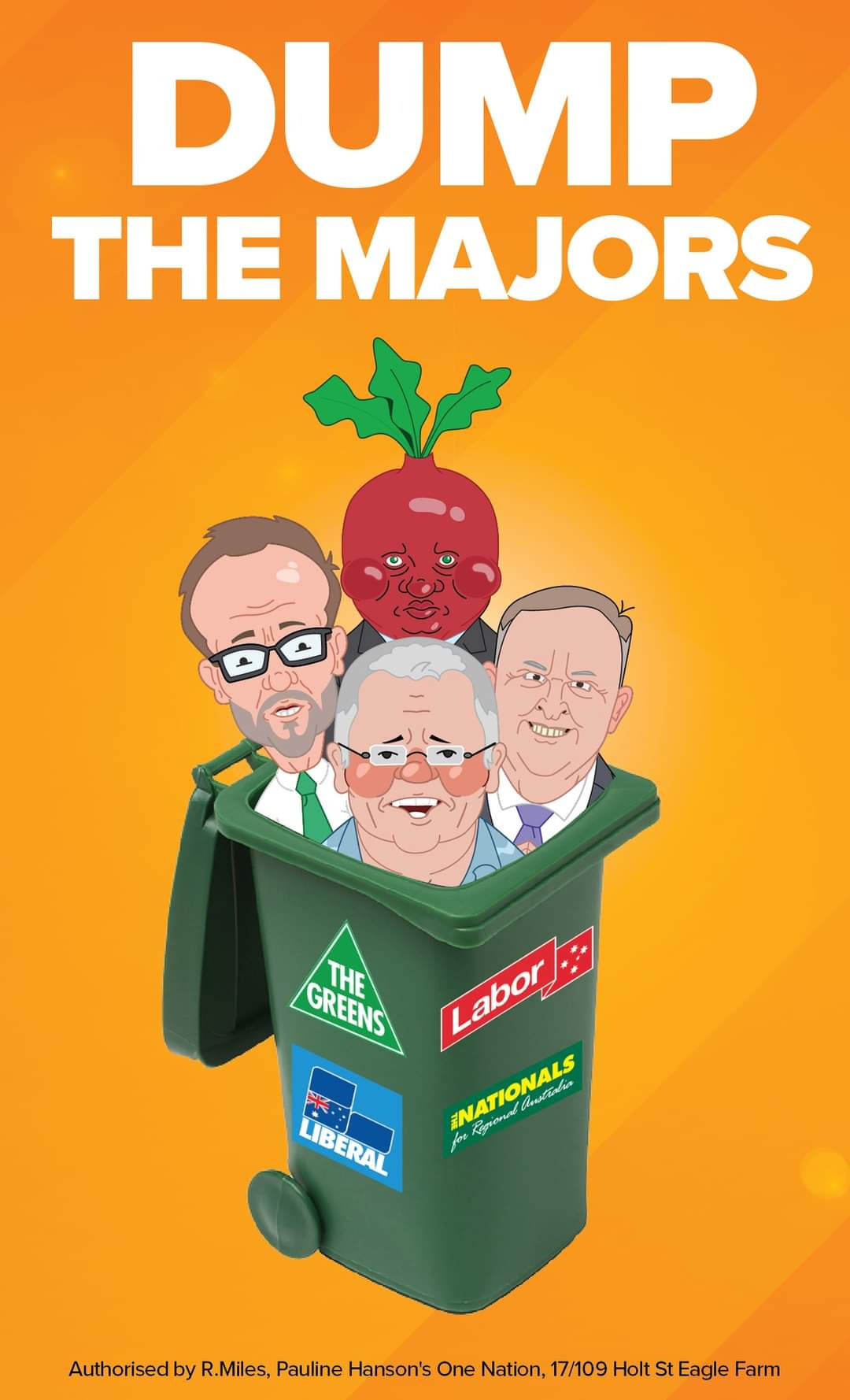 We Australians demand our freedom back from pandemic lock down and other restrictions.

Walt Disney Co. could lose its copyright to Mickey Mouse if a top Republican senator has his way. 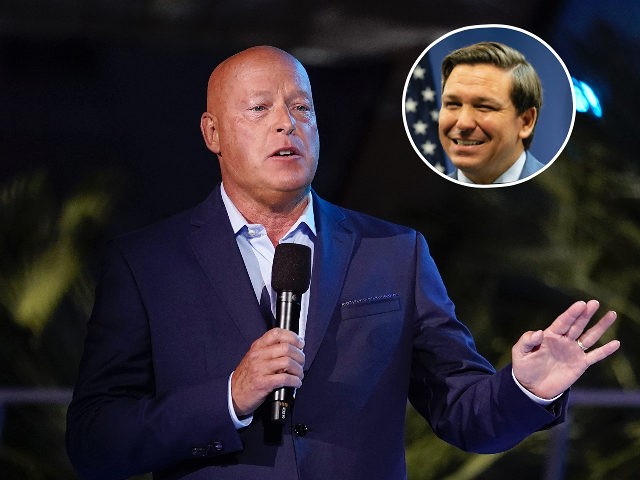 Sucking up to Mohammedans is so much sweeter (and so much dumber) than taking any actions to protect yourself and your community: Faithful Catholics are slamming the archbishop of Bombay after churches hosted Ramadan meals and prayers and rang church bells to usher in the breaking of the Islamic fast. The life of that young Hindu boy was worth so much more than that of that braindead Moslem zombie…. It was the Clinton Deep State that put the Mohammedans in power. From that day on, Nigerian Moslems been engaged in a jihad to wipe out the Christians in that country. The West is stark asleep. No one can be bothered with the daily atrocities. Nigeria: Imam justifies murder of Christian student, ‘we the Muslims have red lines which MUST NOT be crossed’

They all do. We don’t. We let them get away with murder. That’s the problem. 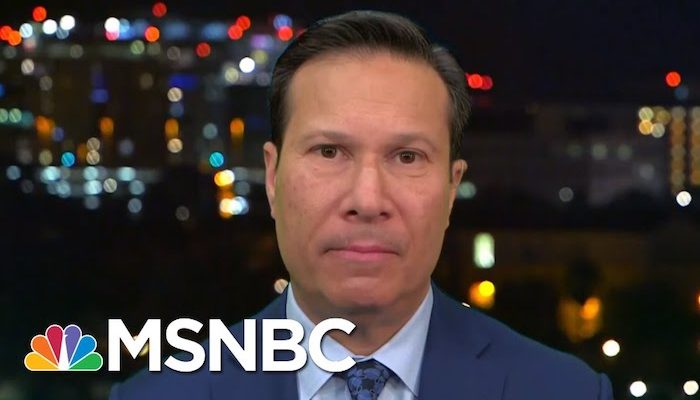 Figliuzzi is not necessarily the dumbest FBI agent ever, but he’s trying really hard to establish himself as exactly that.

Of course, Trump supporters aren’t flying planes into buildings and all that, but such minor details are lost on deep thinkers such as Frank Figliuzzi. This clown’s fact-free and hyper-partisan ravings indicate why the FBI so catastrophically mishandled and willfully misunderstood the nature and magnitude of the jihad threat. Imagine a problem that keeps recurring, but that you dare not name or confront. That problem is only going to grow. “Knife attack on the train: passengers overwhelm the perpetrator – suspicion of an Islamist background…”

#Freedom marches popped up across Australia in capital cities ahead of next week’s federal election. The messages written on their banners, shirts, and flags could not be more clear: ‘Sack them all!’ and ‘Freedom!’

Will Australians vote for freedom?https://t.co/RjCPiBSJRN

Freedom marches popped up across Australia in capital cities ahead of next week’s federal election. The messages written on their banners, shirts, and flags could not be more clear: ‘Sack them all!’ and‘Freedom!’

Labor, Liberal, the Greens, and the Teals want Australia to believe that the big election issue this year is the so-called climate crisis. They have gone all-in on the apocalypse fantasy, shouting from street corners about catastrophe and terror while their billionaire backers loiter in the shadows. In order to sell high taxes and outrageous power bills to the electorate, these parties have to convince wealthy inner-city voters that their children will die (or at least glue themselves to the nearest street) if they don’t endorse Net Zero by twenty-something.

Thousands rally in Melbourne to “vote them out” a week before the federal election.

END_OF_DOCUMENT_TOKEN_TO_BE_REPLACED

We have 8 days until Bill Gates flies his Private Jet to Davos to become the ‘King of World Health’.

When the fuck did Canada become an ATM for the WHO? https://t.co/UKGuNyWxkl

Canada becomes the first country to approve recurring payments to Ukraine of $1.5 billion per year. We can’t find money for clean water, end hunger etc but we can lend out $1.5 bill a year to another country. Maybe we should be asking why the alliance with Ukraine and find out? pic.twitter.com/Ftly6CgsNi

Trudeau gets a three year travel ban on the unvaxxed, then green lights a Moderna plant in Quebec, then brags about pumping out 100 million doses a year. Can you see where this is going?

Scam, money laundering and corruption!!!
Who is behind the World’s scam? 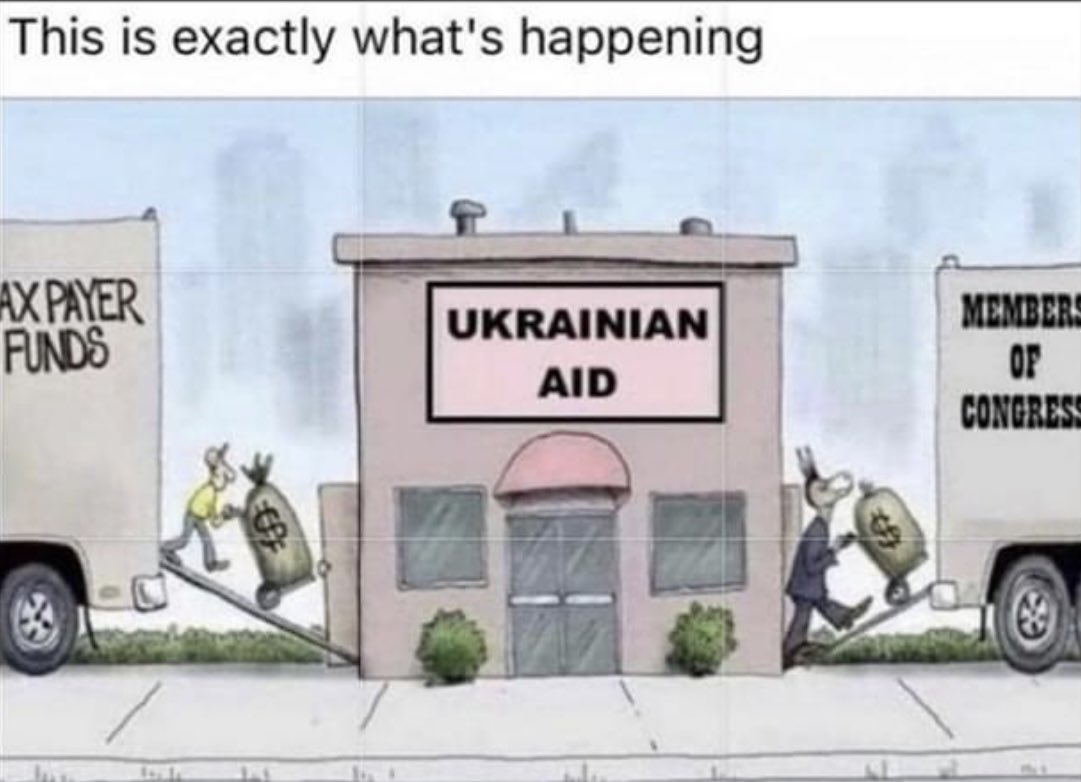 URGENT PFIZER NEWS: There is a coverup of the financial crime which Justin Trudeau knew he was committing on April 2020 when he told us that we would never have a world return to normal without a vaccine. He knew he was lying, he knew he was lining his pocket.

The crisis in State Government health systems is due to three things:

1) the failure of the vaccines to stop infection, transmission and hospitalisation.

2) increased serious illness due to vaccine injuries and

3) understaffing due to vaccine mandates. It’s worth noting that as per attached article “three in every four patients included in the state’s daily COVID hospital numbers were admitted for another condition.” I suspect we know what that other condition is! 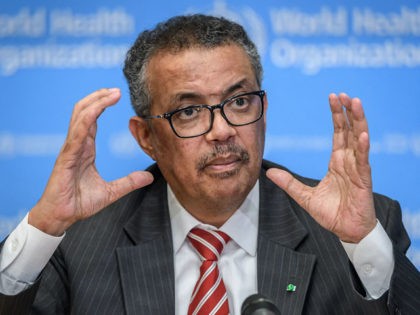 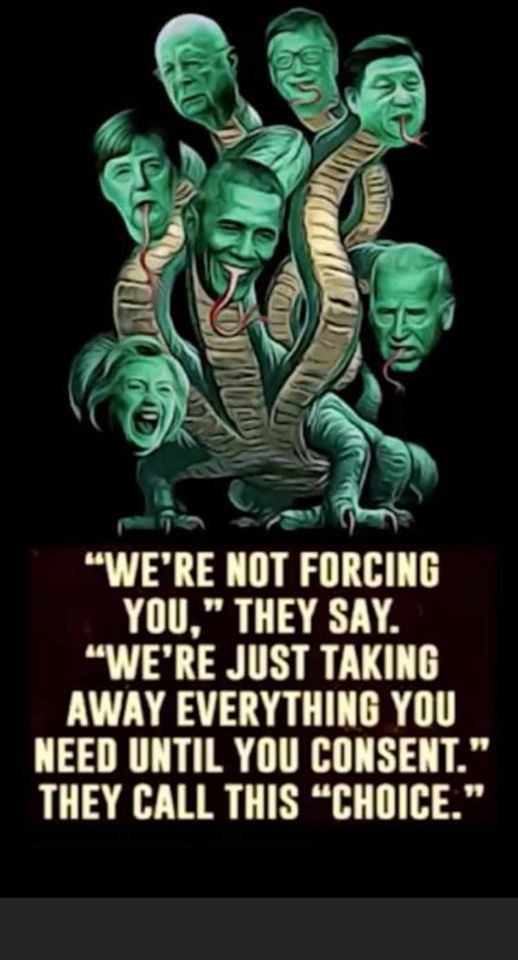 Maher on Ministry of Truth: You Could Apply DHS’ Definition of Disinformation to Obama 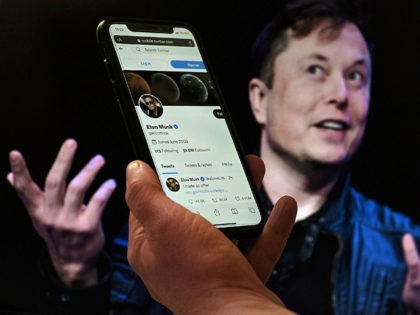 Thank you for doing our laundry. 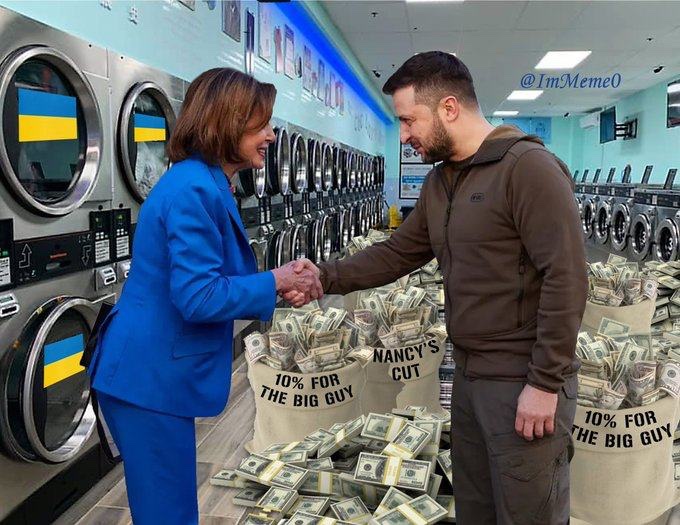 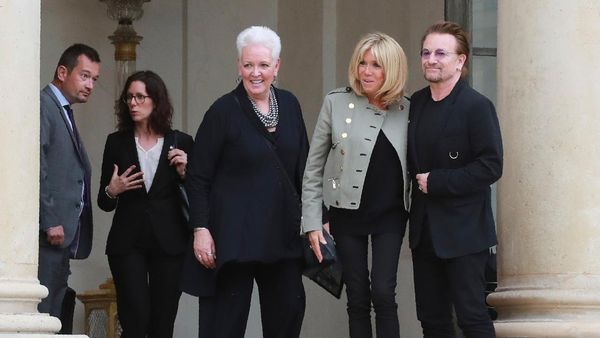 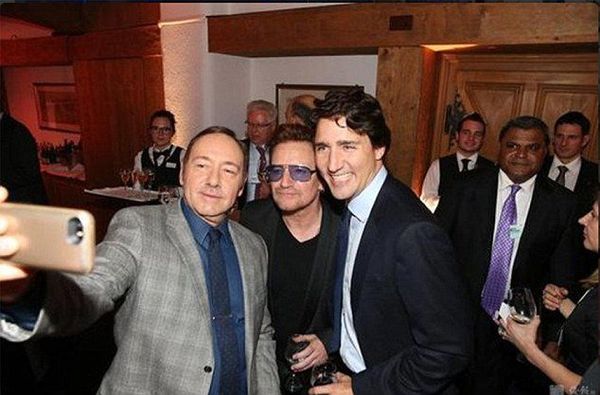 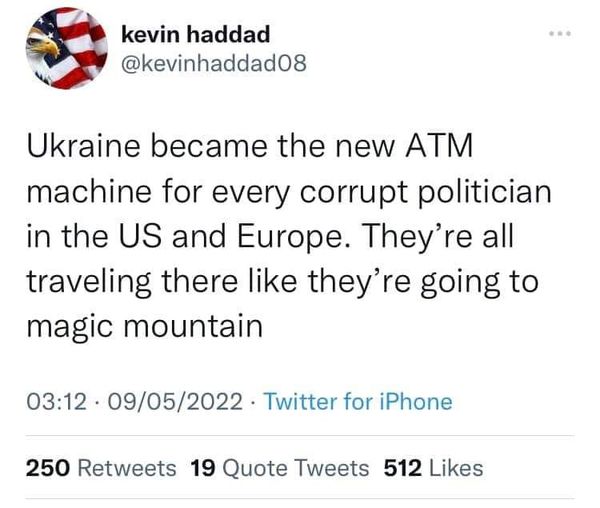 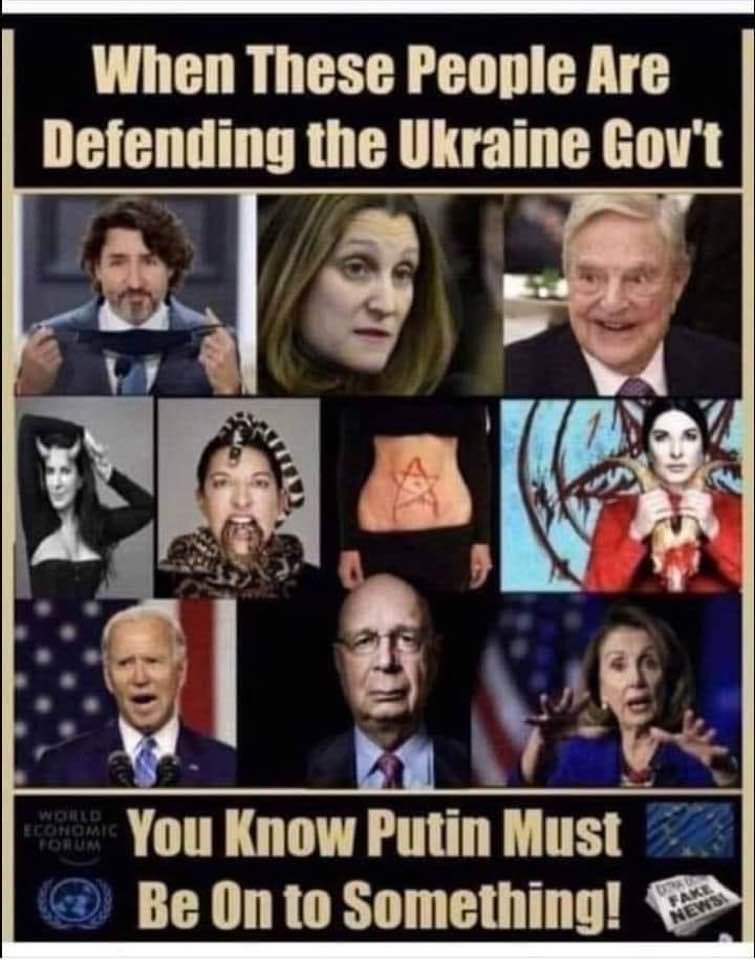 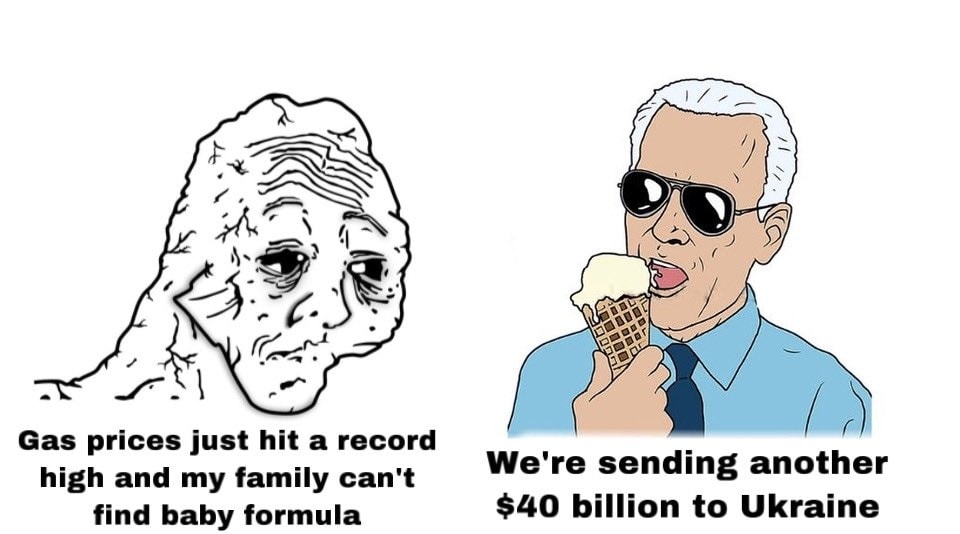