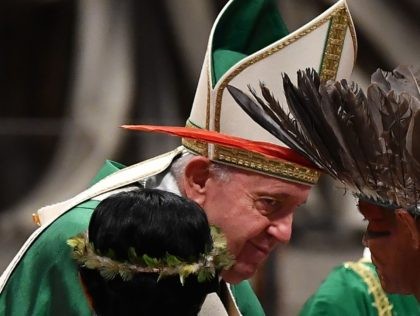 A 17-minute flight? The super-rich who have ‘absolute disregard for the planet’ 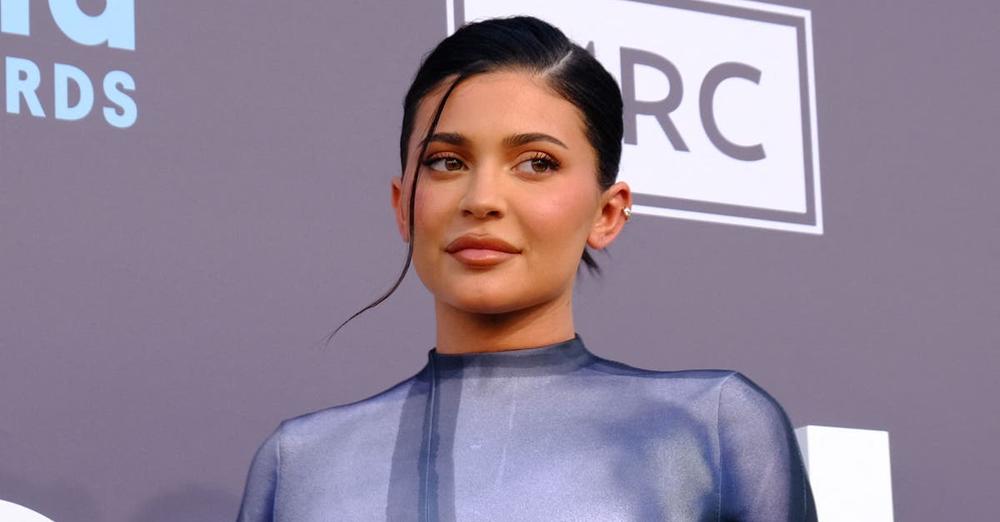 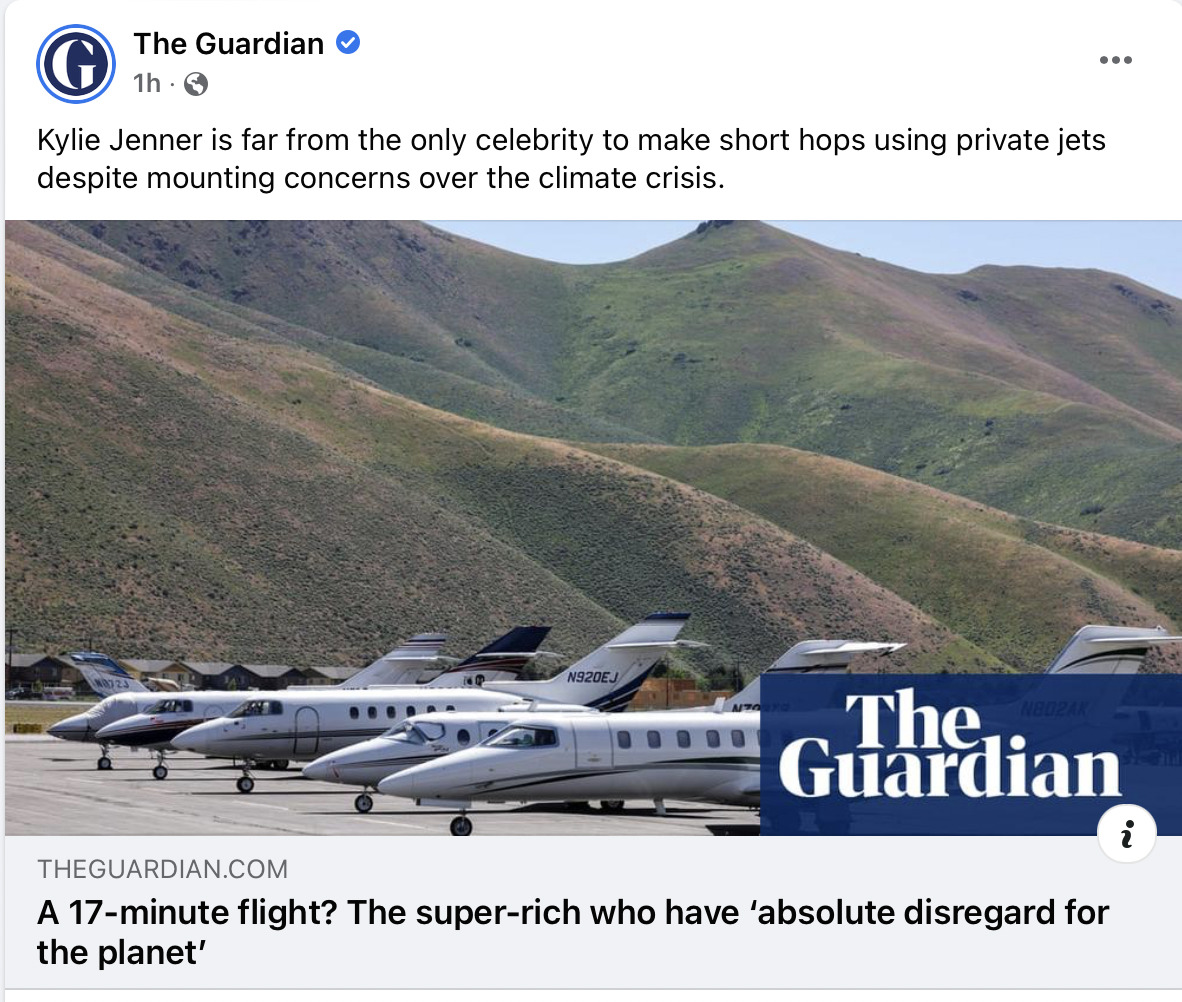 .
Oliver Milman, graphics by Andrew Witherspoon
.
Kylie Jenner has faced a torrent of criticism for her decision to take her private jet on a flight that lasted just 17 minutes. But the practice of taking brief journeys on luxury aircraft appears to be common among the rich and famous despite mounting concerns over the climate crisis.

Jenner, the 24-year-old socialite and businesswoman, has faced online opprobrium after she posted an Instagram picture of herself and her partner, rapper Travis Scott, on the runway of an airport between two private jets with the caption “you wanna take mine or yours?”

According to an automated Twitter account that tracks celebrity flights based on transponders and tail fin marking, Jenner’s flight on 12 July lasted just 17 minutes, taking her from Van Nuys in Los Angeles to the nearby town of Camarillo. The model had earlier taken a 27-minute trip in her jet, a $72m Bombardier BD 700, to Van Nuys from Thermal, California.

She was subsequently attacked by Twitter users for her “absolute disregard for the planet” and for being a “full time climate criminal”. It’s estimated that her 17-minute jaunt would’ve resulted in a ton of carbon dioxide emissions, which, while in itself not a huge amount, is about a quarter of the total annual carbon footprint of the average person globally.

But Jenner – who took an even shorter flight, lasting just nine minutes, between the same two locations in June – is far from the only celebrity to make short hops using private aircraft rather than driving or using public transport.

A review of the Celebrity Jets tracking account shows that just in the past month, the rapper Drake took an 18-minute flight from Hamilton, Ontario to Toronto; Kenny Chesney, the country music singer, was in the air for just 20 minutes between Akron, Ohio and Pittsburgh and the actor Mark Wahlberg took a 23-minute flight from Dublin to County Clare in Ireland, among other short trips.

Many of these brief flights are to “park” an aircraft at a convenient or less expensive location, or are part of a longer, two-part journey, but many appear to have an unclear rationale, such as the decision of Floyd Mayweather, the boxer, to fly 14 minutes from Las Vegas to nearby Henderson, then to fly 10 minutes back on Sunday.

“I’m not surprised people are upset, they are right to be mad at this,” said Jack Sweeney, creator of the Celebrity Jets account, which uses data from a company that tracks aircraft transponders.

Sweeney, a student at the University of Central Florida, has a similar accountthat just tracks the private jet of Elon Musk, the multi-billionaire head of Tesla. In May, Musk took a 28-minute flight in his jet between Houston and Austin, Texas, but Sweeney believes he should be judged differently for this.

“With Elon he’s just trying to be as quick as possible and efficient for work, but someone like Kim Kardashian (who has taken long and short private jet flights) is posting ‘Kim Air’ and flexing and all that,” he said.

Private jets are responsible for around 4% of all aviation emissions, according to a 2016 study, with the airline industry keen to point out that flying in general comprises just a small fraction of the overall sources of planet-heating gases.

“These startlingly short flights show the immense impact of the wealthy in overall aviation emissions,” said Scott Hochberg, an attorney at the Center for Biological Diversity’s Climate Law Institute.

“The problem starts at the top with Kylie Jenner and other celebrities with private jets, which have a much larger impact than commercial aircraft on a per passenger basis. But it also includes many others, as the US constitutes the bulk of the wealthy elite that have the luxury of flying.”

Emissions from private jets flown in the US have surged since the 1990s and will balloon further as larger and more polluting aircraft come onto the market. Short trips using private jets are not solely an American phenomenon; in 2019, one tenth of all flights departing France were private jets, with half traveling less than 500km. The frequent use of aviation is the domain of the world’s wealthy, with just 1% of the global population responsible for half of the emissions associated with flying.

“There are plenty of alternatives to private jets and wanting to avoid traveling with the hoi polloi isn’t a good enough reason for excessive pollution,” said Nikita Pavlenko, fuels team lead at the International Council on Clean Transportation.

“These short flights have emissions that are small in relative terms but per person they are staggering. Aviation emissions are growing exponentially year over year and private jet pollution is growing more than general aviation.”

Major US airlines have announced climate plans that include commitments to ramp up the use of low-emission sustainable aviation fuels (or SAFs), such as cooking oil or hydrogen, with Joe Biden’s administration last year unveiling a goal of a 20% cut in aviation emissions by 2030. This target, however, is voluntary and there has been no significant shift by the industry towards lessening its climate impact.

“Aviation decarbonization is largely all talk and little substance in the US,” said Pavlenko. “As for celebrities, they need to set a positive example and ditch the planes. At the very least, they should exhibit some leadership and use sustainable fuels or a zero emissions plane when that becomes available.”