This is Sheik Yer’mami’s second blog, at present under construction.

If, for any reason, the Winds of Jihad blog goes down, here is where the show goes on, as it must. Â You can log on here: Moe’s Jihad News

New: Winds of Jihad in German!

Guest bloggers wanted! Got something to say? Say it here….

(Israelnationalnews.com) U.S. President BarackÂ Obama continues to “reach out to Muslims” by appointing them to key security posts amid charges he wrongly ignored internal Muslim terror. One recent appointee was harshly criticized for appearing on a British-based television station whose host is a member of a radical Muslim group.

President Obama has continued to “reach out Muslims,” as he said in his keynote speech in Cairo last June, and this past week he swore in a Muslim rights advocate to the Homeland Security Advisory Council, shortly after the Fort Hood massacre. HSAC members are involved in expertise on national security. More>>

A Life of Treason:

A life-long career of treason, sabotage, aiding and abetting the enemy. Â Jane Fonda, this c*#t has been living it up like a maggot in a giant ball of green cheese.

The Counterjihad: Resisting Islamization and Reviving the West 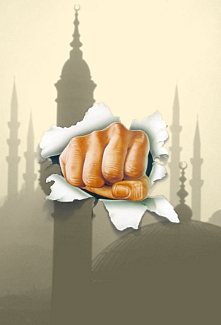 Islam has been at war with the Western world for fourteen centuries â€” since its inception. Muslims all over the world still consider themselves to be at war with non-Muslims; this is why Islam refers to us as Dar al-Harb, the “House of War”.

The West, however, has forgotten that this war exists. We continue to labor under the illusion that Islam is an ordinary religion, like Judaism, Christianity, Hinduism, and Buddhism.
Unfortunately, Islam is above all a totalitarian political ideology, sugar-coated with the trappings of a primitive desert religion to help veil its true nature. The publicly stated goal of Islamic theology and political ideology is to impose the rule of Islam over the entire world, and make it part of Dar al-Islam, the “House of Submission”.
Widely accepted Islamic theology based in Koranic doctrine explicitly requires that Islam be spread by any and all means necessary, including by violence and mass slaughter, in a process known as jihad, or holy war.
The fact that many Muslims do not support or engage in violent jihad is not germane. If only one percent of Muslim believers take the Islamic mandate of jihad seriously, it means there are over fifteen million people scattered among the world’s Muslims who want to destroy us, and we have no means of determining in advance which ones they are.
Therefore, those who oppose Islamic totalitarian ideology and the expansion of Islam into the West have formed themselves into a coalition known as the Counterjihad.

The goals of the Counterjihad are:
To resist further Islamization of Western countries by eliminating Muslim immigration, refusing any special accommodations for Islam in our public spaces and institutions, and forbidding intrusive public displays of Islamic practices.
To contain Islam within the borders of existing Muslim-majority nations, deporting all Muslim criminals and those who are unable or unwilling to assimilate completely into the cultures of their adopted countries.
To end all foreign aid and other forms of subsidy to the economies of Muslim nations.
To develop a grassroots network that will replace the existing political class in our countries and eliminate the reigning multicultural ideology, which enables Islamization and will cause the destruction of Western Civilization if left in place.
We are a loose international association of like-minded individuals and private organizations. We all share the overriding goals described above. We are non-partisan, and welcome members from any political parties who share those same goals, and who also demonstrate a strong commitment to the humane democratic values of the West.
We are Jews, Christians, Buddhists, Hindus, Sikhs, Baha’is, agnostics, and atheists.
We live in Argentina, Australia, Austria, Belgium, Bulgaria, Canada, Croatia, the Czech Republic, Denmark, Finland, France, Germany, Hungary, India, Ireland, Israel, Italy, Lithuania, Malta, the Netherlands, New Zealand, Norway, Poland, Portugal, Romania, Russia, Serbia, Slovenia, Spain, Sweden, Switzerland, the UK, and the USA.

We are the Counterjihad.