“I am not here to impose a solution, but find one,” said the Vice President of the United States Joe Biden after arriving at the Larnaca airport Wednesday.

What a waste of kerosene.

Flag controversy at US vice-president Biden’s TRNC visit
.
This is a surprise: Biden, usually a complete waste of space, did not allow the Turkish occupiers of Northern Cyprus to use him for propaganda purposes. The Turks are whining that he rejected to fly their flag during his visit.

U.S. vice president Joe Biden asked for Turkish Republic of Northern Cyprus (TRNC) and Turkey flags to be removed during his meeting with the Turkish Cypriot president Dervis Eroglu.

END_OF_DOCUMENT_TOKEN_TO_BE_REPLACED 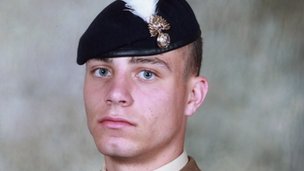 Fusilier David Lee Collins was based at Dhekelia

A man who admitted stabbing a British soldier outside a Cyprus nightclub has been jailed for eight years.

Fusilier David Lee Collins, 18, from Manchester, was stabbed outside the club in Ayia Napa in November 2011.

Continue reading the main storyÂ  (thanks to kaw)

Â … and then there’s Cyprus.

While the West disarms, Turkey is busy arming itselfÂ (thanks to eye on the world)

(Turkey) Last May, Turkish Prime Minister Recep Tayyip ErdoÄŸan visited Greece and asked them to cutÂ military spendingÂ so that peace could flourish between the two countries and so, ultimately, they could both save money.

Admirable, don’t you think? And promotes the message of peace which Muslims the world over are renowned for. Well, here is something the Turks didn’t mention when they talked about peace in our time last May.

And then there’s Cyprus.

END_OF_DOCUMENT_TOKEN_TO_BE_REPLACED

“These funds will Â promote reconciliation and confidence building”–

Ya think? I have a great idea: lets invade some countries, rape the women, kill the the men and drive the rest off and then get the EUro-dhimmies to pay us to promoteÂ “reconciliation & confidence building”. Â  Good work if you can get it, some guys have all the luck!

(ANSAmed) â€” BRUSSELS, JUNE 27 â€” Today the European Commission approved 26.5 million euros of funding for the Turkish Cypriot community. These funds will focus on measures to promote reconciliation and confidence building. Beneficiaries will include civil society organisations, schools, farmers, villages, SMEs. “These 26.5 million euro â€” said Stefan Fule, EU Commissioner for European Neighbourhood Policy â€” demonstrate the continued commitment of the EU to the Turkish Cypriot community and to a Cyprus settlement. The activities implemented by the Commission with this fresh funding are reunification-driven, underlining the EU’s expectations for a successful end of the talks towards reunification of the island”.

Chancellor Angela Merkel said on Saturday she would visit Cyprus in January to offer Germany’s help in resolving an impasse holding up security cooperation and Turkey joining the European Union.

“This will be an opportunity for me to see if Germany can play a helpful role in resolving the difficulties that there are,” Merkel said after talks with Turkish Prime Minister Recep Tayyip Erdogan in Berlin.

Erdogan said progress towards Turkey joining the EU “should not slow down,” and that he had asked Merkel for Germany’s support. Merkel reiterated her position that the process had an “open end.”

Indeed. The jihad is open ended. It Â will continue long after Merkel is gone.

END_OF_DOCUMENT_TOKEN_TO_BE_REPLACED

A Greek Cypriot leader criticized Turkey for its occupation of northern Cyprus as Pope Benedict XVI began a pilgrimage to the divided island Friday, bringing a message of peace to the region.

Pope Benedict XVI is greeted by Chrysostomos II, archibishop of Cyprus, during their meeting in front of the church of Aghia Kiriaki Chrisopolitissa in Paphos, Cyprus, on Friday. The pontiff is in Cyprus for a three-day visit. (Pier Paolo Cito/Associated Press)

Pope: Bishop’s murder will not hurt dialogue with Islam/which part of “kill the unbelievers” is it that this pope doesn’t understand?

Addressing Benedict, the head of Cyprus’s Orthodox Church, Archbishop Chrysostomos II said “Turkey has barbarously invaded and conquered by force of arms 37 per cent of our homeland.”

END_OF_DOCUMENT_TOKEN_TO_BE_REPLACED

Same BS, same game plan: the Muslim Turks want it all. The Â dhimmi-Greeks think they can reason with them, but they are in the same boat with Israel and many other countries that have been invaded by the Islamic scourge…..

Christofias said the “two peoples and two states” thesis of the Turkish Cypriot side was unacceptable.

Greek Cypriot Leader Demetris Christofias said the “two peoples and two states” thesis of the Turkish Cypriot side was unacceptable calling on Turkish Republic of Northern Cyprus President Dervis Eroglu to give it up.

Christofias delivered a speech Friday in Lefkosa, during his meeting with the new British High Commissioner to the Republic of Cyprus John Christopher William Kidd.

He said the settlement talks would proceed as they agreed with former Turkish Cypriot President Mehmet Ali Talat, on the basis of a bizonal and bi communal federation with political equality, single sovereignty, and single foreign representation as laid down by UN Security Council resolutions.

Christofias said though they recorded relative progress in some of the crucial issues in talks with Talat, no major progress took place, accusing his former counterpart of lacking flexibility and autonomy.

Christofias urged the new Turkish Cypriot President Eroglu to give up on the two peoples and two states thesis under a loose confederation. He argued that Eroglu won the elections with votes of Turkish Cypriot citizens who migrated from Turkey.

END_OF_DOCUMENT_TOKEN_TO_BE_REPLACED

”Religious values should be respected in order the relations between the two sides to remain positive.”

In Cyprus, since the Turkish occupation began:

(ANSAmed) – ANKARA – Turkish Republic of Northern Cyprus’s (KKTC) Directorate of Religious Affairs has applied to state offices in Greek Cyprus to stop the construction of a bar in the garden of the Hala Mosque in South Cyprus, which has resulted in criticism from Muslims living on the island, Today’s Zaman reports. ”Religious values should be respected in order the relations between the two sides to remain positive”, the director of Religious Affairs in the KKTC, Yusuf Suicmez, said, underlining that it is very important for Muslims because the mosque, that lies on the shores of the Larnaca Salt Lake, reportedly houses the tomb of Umm Haram, the aunt of the Prophet Muhammad, making it the fourth holiest Muslim shrine after Mecca, Medina and Jerusalem.

Curiously, Muslims who warn that Â “Religious values should be respected in order the relations between the two sides to remain positive” Â have no such qualms or considerations when it comes to religious values of others, as we can see here:

END_OF_DOCUMENT_TOKEN_TO_BE_REPLACED

Here’s a hint of what happened:

“…he was an Arab Wahhabi, they want to be honoured, they think they are better than us. They say that no Pakistani, no Indian, no Bangladeshi should come into the mosque, but we say that nobody can tell us as Muslims that we cannot pray here. Everyone is made equal in the world,” said Mohammed.” Â Hmm, not really: there is dhimmitude and the jiziya which impoverishes and Â degrades unbelievers to a status below slaves…

A CLASH involving at least 100 people â€“ some reports say 500 â€“ using stones, sticks and pipes took place on Monday night at Omeriye Mosque in Nicosia, following the ejection of one group of worshippers who followed a different interpretation of Islam to the majority of those present.

Another incident involving worshippers at the Omeriye Mosque had occurred on Sunday night, during a pop concert by Greek artist Pantelis Thalassinos at the Erodos CafÃ© and Restaurant next the mosque, while evening prayers were taking place.

Worshippers became angry when their prayers were interrupted at 9.30pm by the start of the concert, and one or two people expressed their anger by starting to throw stones at the assembled crowd. Police intervened quickly, and calm was restored by mosque officials.

(ANSAmed) -Â NICOSIA, SEPTEMBER 23 – The fourth section of the European Court of Human Rights issued yesterday its decisions on 18 cases Greek Cypriots brought against Turkey, condemning Ankara of human rights violation due to the continuing occupation of Cyprus’ northern part, which deprives them of their home and properties. All the cases, asÂ CNA reports, rely in particular on Article 1 of Protocol No. 1 (protection of property) and most also on Article 8 (right to respect for private and family life). The Court decided that it is not disputed that the applicants, who were arrested and remanded in custody by the so-called Nicosia district court in the Turkish occupied areas, were deprived of their liberty or that there was an ill-treatment by the so-called Turkish Cypriot authorities…

END_OF_DOCUMENT_TOKEN_TO_BE_REPLACED