Sorry ladies, this time its your turn:

Heh, perhaps the profit Muhammad had a point:

Today’s Chicago Tribune highlights the problem with chick reporters.Â  A story written by three female reportersâ€“Mary Wisniewski, Natasha Korecki, and Nancy Stuenkelâ€“tells us this “important detail” about one of the Islamic terrorists indicted for using their Chicago-area halal slaughterhouse as a base for terror attacks in Denmark: Um, does anyone really believe that any court records anywhere in America said a terrorism suspect has “striking eyes”? And why the heck would we care what his eyes look like? How does that have anything to do with the guy’s involvement in international Islamic terrorism? So, if he’s got nice eyes, he couldn’t possibly be a terrorist? Hilarious. Guess what, Chicago Tribune?â€“They don’t all look as Halloween-scary as Mohammed Atta. Read the rest of this entry Â» and read theÂ 12 Comments: people do get it!

Egypt pressed ahead Monday with plans to kill all pigs in the country, amid rising concerns there that the animal considered unclean by Islam may cause a swine-flu epidemic.

First, I must note that I have little sympathy for Coptic Christians, who are mostly found in Egypt but are also elsewhere in the Arabic world. When it comes to choosing sides, the Copts have been among the most anti-Semitic, anti-Israel, and pro-Hezbollah/Muslim Brotherhood religious sects in the Middle East. In Lebanon, they haven’t been shy about defending Hezbollah against Maronite Christians, whom they see as rivals. In Egypt, they took part in the Islamic purge and of Egypt’s Jews from the country.

Jews as VirusesÂ Â (FrontPage Magazine)
The Arab world’s reaction to swine flu says a lot about the prospects for peace.

“You Jew, Convert to Islam So Your Life is Safe!”Â Â (SF Gate)
The majority of Yemen’s Jews have long been chased away or forcibly converted. The clock is ticking on the rest.

END_OF_DOCUMENT_TOKEN_TO_BE_REPLACED

*Â No Tears for Roxana Saberi: Debbie Schlussel is no bleeding heart

No Tears for Roxana Saberi:Â American-Iranian Apologist “Reporter” Got What She Deserved

Iran rushes a woman to the gallows

In case you hadn’t noticed, the ruling regime in Iran is a throwback to barbarism. Latest case in point:Delara Darabi.

US journalist Roxana Saberi turns 32 today in an Iranian prison. After an hour-long trial, she was sentenced to eight years behind bars for “espionage.” She was initially told she was arrested for buyingÂ bootleg wine, and then because she was working as a journalist without a license. She’s now on day five of a hunger strike. Today, one of her defense lawyers was denied access to her.

Saberi is a former North Dakota beauty queen educated at Oxford and Northwestern with an extraordinary background.Â Here’s some of her work. Her home state newspaper, theÂ Grand Forks Herald, weighs in:Iran’s imprisonment of Roxana Saberi is an international outrage, a flagrant violation of the norms of civilized conduct. But it should come as no surprise.Â Â

END_OF_DOCUMENT_TOKEN_TO_BE_REPLACED

Despite Theatrics, Hezbollah Muslim Sentenced to Eight Months in Prison for Anti-Semitic Death Threats to Schlussel; Judge Gets It, Warns Against Muslim Community’s Threats to Silence Free Speech;

END_OF_DOCUMENT_TOKEN_TO_BE_REPLACED

*Â Debbie Schlussel has some terrific inside information onÂ Â Campbell Brown and her husband Dan Senor, both shameless Â cocksuckers who sold out to the Arabs and obstruct, pervert and distort what should be your Â unbiased NEWS.

* Â There are many reasons why the Caliphate News Network never reports anything truthfully about the ME. If you ever wondered why their news is cooked check this out, here 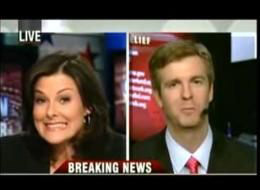