Why did Calma join a conference for racists?

David Knoll should have gone in even harder, given Tom Calma’s committment toÂ institutionalising racial dividesÂ and toÂ witchhunts:

THE decision of Tom Calma to attend last week’s UN Durban II ConferenceÂ in his capacity as race discrimination commissioner was controversial in more ways than one. The principal proponents of the conference, the Organisation of the Islamic Conference and various rogue states, including some of the worst abusers of human rights on this planet, had two clear agendas.

Their first agenda was to achieve the UN’s imprimatur for a position that Islam in particular (but not exclusively) be shielded from criticism in the media and other areas of public life… The second agenda was to achieve that same imprimatur for demonisation of the Jewish nation, the state of Israel, with no other nation singled out for criticism…

The proponents of the conference will have noticed inevitably that Australia (along with the US, Israel, Canada, New Zealand, Italy, the Netherlands, the Czech Republic, Poland and Germany) publicly chose not to participate in a conference whose clear design, prepared during many months, was to promote a particular form of racism rather than to fight all forms of racism. Having an official as senior as the race discrimination commissioner attend as an observer could be perceived as a signal that Australia might in the future adopt some or all of the Durban II agenda.

Did Australia really oppose the conference or was Australia having a bet both ways? It is a pity that Calma did not follow Australian government policy and have no truck with racism of any hue.

A blog for all

Ahmadinejad’s Geneva speech was censored before being published

END_OF_DOCUMENT_TOKEN_TO_BE_REPLACED 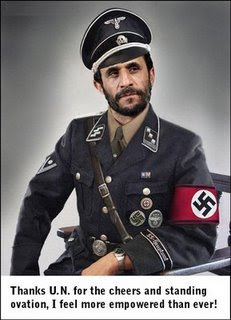 Â The UN conference against racism becomes is -Â as predictedÂ – a conference for racists and commie organizations:

the racistÂ Congressional Black Caucus, Human Rights Watch and the U.S. African Chamber of Commerce say the United States could have made a difference on other issues at a U.N. anti-racism meeting…

Ban Ki Moonbat is shocked, stunned and amazed that his conference against racism was turned on day one into a conferenceÂ forÂ racism, precisely as predicted and planned:

“I deplore the use of this platform by the Iranian President to accuse, divide and even incite,” he said in a statement. “This is the opposite of what this conference seeks to achieve.”

Oh, really? Merely by being held and giving the Ahmadinejad and his fellow bigots a platform, the harm has been done, however pro-forma the complaints of some Western leaders:

But while the speech from the Iranian leader, who has also described the Nazi Holocaust as a “myth”, was shunned by Western powers, otherÂ delegates who stayed to hear him speak greeted his words with applause.

Why is Pope Benedict supporting the UN’s ‘anti-racist’ hatefest against Israel?

END_OF_DOCUMENT_TOKEN_TO_BE_REPLACED

Pressure works, in an update onÂ this story. There will still be an expression of concern about “negative stereotyping of religions,” but of course, there has been no word on how Qur’an 98:6, which calls unbelievers the “vilest of creatures,” factors into this. Or Qur’an 9:30, which claims that Jews call Ezra the son of God. Or 2:62-65, 5:59-60, and 7:166, which call unbelievers apes and pigs. So the double standard is clearly still alive and well.

END_OF_DOCUMENT_TOKEN_TO_BE_REPLACED

*Â Islamophobia is not the same as anti-Semitism

Why are we going to this hate-fest?

Opposition Foreign Affairs spokeman Julie Bishop is right – there is no way the Rudd Government should go to the UN’s latest group hate against the West and Israel:

TheÂ Australian Government should not attend the United Nations Durban Review Conference, to be held in Geneva on 20-24 April, due to the obvious potential for a repeat of the anti-Semitism that marred the first Durban conference..

The US has joined Israel and Canada in pulling out.Â Some European countries have also indicated they are considering not attending the conference in Geneva… Robert Goot, president of the Executive Council of Australian Jewry and Philip Chester, president of the Zionist Federation of Australia, both called on Australia to follow the US.

The US State Department agrees the draft document of the UN conference is clearly anti-Israeli, and suggests it is also biased against the West and its freedoms:

Sadly, however, the document being negotiated has gone from bad to worse, andÂ the current text of the draft outcome document is not salvageable… It must not single out any one country or conflict, nor embrace the troubling concept of “defamation of religion.” The U.S. also believes an acceptable document should not go further than the DDPA on the issue of reparations for slavery.

So why is the Rudd Government so eager to go to such a festival of hatred against our values and allies? Writer Alan Gold is right – because a refusal to attend might offend Muslim and African countries whose UN votes Kevin Rudd is unnaturally eager to have:

Foreign Minister Stephen Smith hasn’t yet announced whether Australia will attend the review in Geneva. Much is at stake. Australia is a leading contender forÂ a non-permanent seat on the UN Security CouncilÂ and boycotting may affect how we are viewed at the tables of the world body.

How shameful a sell-out. As if it wasn’t enough that to toady for UN votes this Government has already voted for two anti-Israeli resolutions in the United Nations that the Howard Government wouldn’t support, and has now resumed aid even to Mugabe’s Zimbabwe.

END_OF_DOCUMENT_TOKEN_TO_BE_REPLACED

ROME (AP)Â â€”Â Italy said Thursday it is pulling out of a U.N. conference on racism â€” the latest blow to a meeting seen by many Western governments as marred by Muslim attempts to attack Israel and shield Islam from criticism.

Foreign Minister Franco Frattini said Italy has withdrawn its delegation from the preparatory negotiations ahead of the so-called Durban II conference due to “aggressive and anti-Semitic statements”Â in the draft of the event’s final document.

Italy’s foreign minister has decided to withdraw his country’sÂ delegation from the summitÂ [EPA]
Italy has said it will not take part in a United Nations conference on racism because of “anti-Semitic language” in a draftÂ declaration.

A spokesman for Franco Frattini, Italy’s foreign minister, said on Friday that Frattini had “decided that Italy was withdrawing its delegation” from a conference to be held in Geneva in April.

END_OF_DOCUMENT_TOKEN_TO_BE_REPLACED

The Obama administration’s decision not to attend the Durban Review Conference, scheduled to open in Geneva on April 21, is a very significant step toward ending the obsessive “soft-power attacks” against Israel and restoring the moral foundations of human rights.

If Washington’s conclusion leads the Europeans to a similar move, the conference might be cancelled, or, if it is held, it will be seen as a farce, with participants limited to Iran, Libya, their Muslim allies and some marginal states.

Pictures of the week