I Â believe in freedom of speech, that’s why I reject this:

Those who Â call Jews ‘Nazis’ discredit themselves. There are things that are far more dangerous to Israel and Jews:Â Anti-Israel lobby wins arms ban from UK governmentÂ Or these guys:Â If This Does Not Make You Throw Up…

And yes: Martin Luther King was NOT a Socialist:

The most telling action in support of human rights would be to get rid of the HRC. It is a yes minister body that doesn’t help humans and ignores rights. They are the Nazis of political correctness gone gaga. Fiscal blood sucking organisations. All they do is prop up malcontent minorities and force normal hard working people to fund these parasites.

More rights for them, not you

Recommendation 38: The Commission’s existing functions and powers should be enhanced as follows: …

Do the words “gravy train” resonate?

Orwell’s Little Helpers: whatever it takes to shut you up!

Down with the Yuman Rites Circus!

Jennifer Lynch, chief Canadian Human Rights Commission goon,Â refuses to appearÂ on a Canadian talk show with Ezra Levant. So another Human Rights Commission loser isÂ sent in her placeÂ â€“ but he only appears on the condition that author, journalist and free-speech advocate Levant not argue with him.Â Mark SteynÂ weighs in: “Canada’s Chief Commissar of ‘Human Rights’, Jennifer Lynch, QC, calls for ‘balance‘, so feel free to provide some in theÂ comments section.”

Uh-oh:Â Do we Aussies wanna be like them? Here comes the thought police:

Australia’s discrimination watchdog has criticised human rights laws as “piecemeal”, weak and insufficient in protecting human rights, and called for an overhaul …

What odds she’s talking about the likes of Canada?Â

END_OF_DOCUMENT_TOKEN_TO_BE_REPLACED

GITMO? NO, KILL THUGS ON SPOT:Â

WE made one great mistake regarding Guantanamo: No terrorist should have made it that far. All but a handful of those grotesquely romanticized prisoners should have been killed on the battlefield.

TheÂ fewÂ kept alive for their intelligence value should have been interrogated secretly, then executed.

Terrorists don’tÂ haveÂ legal rights or human rights. By committing or abetting acts of terror against the innocent, they place themselves outside of humanity’s borders. They must be hunted as man-killing animals.

And, as a side benefit, dead terrorists don’t pose legal quandaries.

END_OF_DOCUMENT_TOKEN_TO_BE_REPLACED

There’s some good news – and plenty bad – about the United Nations’ most shamefully hypocritical body:

The United States Tuesday was elected, along withÂ China, Cuba and Saudi Arabia, to the UN Human Rights Council, a body shunned by the previous US administration for harbouring notorious rights violators.

Bruni backs off from Obama kiss (or did the Muslim Obama back off?)

While he wasÂ bowingÂ to Saudi King Abdullah in London on Thursday (Hat Tip:Â Memeorandum), US President Barack Hussein Obama took another step that is meant to bring about the Jewish state’s extinction. HeÂ endorsed the ‘Saudi plan’Â for the destruction of the Jewish state.

While he wasÂ bowingÂ to Saudi King Abdullah in London on Thursday (Hat Tip:Â Memeorandum), US President Barack Hussein Obama took another step that is meant to bring about the Jewish state’s extinction. HeÂ endorsed the ‘Saudi plan’Â for the destruction of the Jewish state.

US President Barack Obama reiterated his support for the Saudi Mideast peace initiative in a meeting with King Abdullah on Thursday night, the White House said in a statement.

END_OF_DOCUMENT_TOKEN_TO_BE_REPLACED

* Â Yuman Rites for Muslims ueber alles, because only Muslims are human. (Koran:Â unbelievers are the “vilest of creatures” (98:6) Â Once again we see a heavily Muslim infiltrated far left NGO come out in the defense of the most vilest, mysogynistic cult on earth:

(Berlin) – German state bans on religious symbols and clothing for teachers and other civil servants discriminate against Muslim women who wear the headscarf, Human Rights Watch said in a report released today.

The 67-page report, “Discrimination in the Name of Neutrality: Headscarf Bans for Teachers and Civil Servants in Germany,” is based on extensive research over an eight-month period. It analyzes the human rights implications of the bans and their effect on the lives of Muslim women teachers, including those who have been employed for many years. It says that the bans have caused some women to give up their careers or to leave Germany, where they have lived all their lives.

“These laws in Germany clearly target the headscarf, forcing women who wear it to choose between their jobs and their religious beliefs,” said Haleh Chahrokh, researcher in the Europe and Central Asia division at Human Rights Watch. “They discriminate on the grounds of both gender and religion and violate these women’s human rights.”

Half of Germany’s 16 states (LÃ¤nder) – Baden-WÃ¼rttemberg, Bavaria, Berlin, Bremen, Hesse, Lower Saxony, North Rhine-Westphalia, and Saarland – haveÂ  laws prohibiting public school teachers (and other civil servants in several states) from wearing the headscarf at work.Â The laws were all introduced in the last five years, following a 2003 Constitutional Court ruling that restrictions on religious dress are only permissible if explicitly laid down in law. The other eight German states have no such restrictions.

END_OF_DOCUMENT_TOKEN_TO_BE_REPLACED

Looks like Tom Calma, Australia’s “Race Discrimination Commissioner”, has not found enough grievance groups to participate in his Orwellian scam designed to vilify and criminalize people like us for telling the truth about Islam.Â That’s why the deadline for submissions has been extended. If you haven’t voiced your objections yet, do it NOW!

At the end of January we sent an email detailing the Inquiry being conducted by the Australian Human Rights Commission (formerly called the Human Rights and Equal Opportunity Commission â€“ HREOC) – it is titled ‘Freedom of Religion and Belief in the 21st century’.

The closing date for the Inquiry has been EXTENDED to 28 February 2009 â€“ so if you didn’t put it a submission there is STILL TIME to do so!

It is important that everyone tells the Inquiry what they think about freedom of religion and belief in Australia. Although it might sound ‘nice’ to have laws affirming religion and belief, the reality is that such laws RESTRICT free speech. It is vital that such laws not be enacted at a federal level – the previous report, Article 18, from 1998, recommended a ‘Religious Freedom Act’ (see list of Recommendations at bottom of page for ‘Discussion Paper’). The religious vilification law in Victoria has caused more disharmony than ‘harmony’ in the community.

The protection of our Judeo-Christian heritage is a priority.

Similar laws are being used around the world to restrict free speech. Geert Wilders is currently on trial in The Netherlands. Mark Steyn has been brought before a Tribunal in Canada forÂ sections printed from his book America AloneÂ …

The Organisation of Islamic Countries is working at the United Nations level to have lawsÂ and treaties enacted to stop criticism of Islam.

END_OF_DOCUMENT_TOKEN_TO_BE_REPLACED

* Â “Human Rights” applies to Muslims Only, in Islam-speak: because unbelieversÂ are the vilest of all creatures. (98.6). — Surely the vilest of animals in Allah’s sight are those who disbelieve. (8.55)

ISLAMABAD,Â PakistanÂ â€” Two missiles fired from American drone aircraft killed more than 30 people, including Qaeda andÂ Talibanfighters, near the Pakistani border with Afghanistan on Saturday, according to a Pakistani intelligence official and residents of the area. 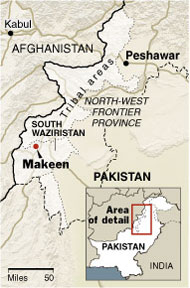 The American attacks were near the town of Makeen.

The missiles struck three compounds, including one where the leader of the Pakistani Taliban,Â Baitullah Mehsud, and foreign and local fighters loyal to him sometimes gather, the official and residents said.

END_OF_DOCUMENT_TOKEN_TO_BE_REPLACED

*Â Defiant Wilders to travel to Britain despite ban

The Ontario Human Rights Commission is calling for Parliament to force all Canadian magazines, newspapers and “media services” Web sites to join a national press council with the power to adjudicate breaches of professional standards and complaints of discrimination.

* Tom Calma is working on a similar scam Down Under, with the support of chairman KRudd who wants to censor the internet:

Tom Calma: “Prove that you’re not racist-, you racist!”