Arabic-speaking Christians have been using the word “Allah” for God from time immemorial, and these Malay Christians, influenced by this in their non-Arab but Muslim society, have been doing so for decades. The whole idea of making this an issue at all was just another expression of Islamic supremacism. Or maybe an excuse to firebomb churches.

KUALA LUMPUR (Reuters) – Arsonists in Malaysia struck a fourth church on Saturday as the government tried to soothe tensions arising from a row over the use of the word “Allah” to refer to the Christian God. More>>

We get it, Allah is your God, not ours

Only Muslims have the right to worship Allah, all other monotheists are worshiping a different God than Allah.

Muslims say that Allah is the Abrahamic God. Jews, Christians and Muslims pray to the one true God, they say. Only that Judaism and Christianity are corrupted forms of Islam, the true religion. Jews and Christians are hence “wayward Muslims”, they would say.

END_OF_DOCUMENT_TOKEN_TO_BE_REPLACED

without it, Islam falls apart. People should take it with a pinch of salt when the government said it would respect the court’s decision. Next it would appeal, and if this court passed whatever judgment, the Federal Court would definitely pass the judgment that would be favorable to the government. Period.

Because “our Allah and your Allah is one” (Qur’an 29:46), but that doesn’t mean that many Muslims even in modern, moderate Malaysia are willing to allow the Christians to forget who’s boss. An update onÂ this story. “Government calls for calm over Allah court ruling issue,” fromÂ The Star, January 2 (thanks to Â Jihad Watch):

KUALA LUMPUR: The Government is calling for calm among Muslims and non-governmental organisations and asking everyone to respect the court’s decision over the use of the word Allah while it takes steps to appeal against the decision.

END_OF_DOCUMENT_TOKEN_TO_BE_REPLACED 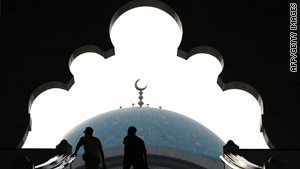 END_OF_DOCUMENT_TOKEN_TO_BE_REPLACED

News reaches us of aÂ “Peace conference” in Malaysia. The Peace campaigner George Galloway,Â here praising some “peace campaigners” in Iraq, will be in attendence. Â More from “Harry’s”

US airline to pay out in flying imams case

WASHINGTON â€” US Airways has agreed to pay “undisclosed damages” to six imams it kicked off a flight in 2006 because of alleged suspicious activity, a prominent rights group said Tuesday.

The Flying ImamsÂ settled their case against US Airways yesterday. But questions linger. Here are more revelations from the blockbusterÂ Muslim Mafia. “‘Flying imams’ rewarded for ominous airline ‘stunt’? Police detective: ‘Acts of staged controversy could be used to desensitize security personnel,'” by David Kupelian forÂ WorldNetDaily, Â thanks to JW:

The government must stop seeing all Muslims as innately prone to violence if it wants to rebuild trust in the community, argues Rizwaan Sabir.

But it is “Islamophobic” to notice, doncha know.

So, just over half the world’s terrorist organizations are Muslim in origin and function. No other religious ideology is close–not even, most notably, Christianity (with its 2 billion+ membership, you’d think more would be involved in violence, wouldn’t you?). Since Muslims make up 20% of the world’s population, their involvement in over 50% of the world’s terrrorist [sic] groups is telling and troubling–and something the NIS is loathe to admit, thus tainting its claim to “know…the nature of the threats.”

Why? Because Geert Wilders is coming to speak:

A victory for the freedom of speech: Wilders to speak at Temple despite Muslim attempts to silence him

The thugs of the Muslim Students Association can’t answer him, so they tried to silence him. This time, they failed.

The Muslim Students Association, by the way, was named as an allied group of the Muslim Brotherhood in theÂ Brotherhood internal document that explained the Brothers’ mission in the United States as a “grand Jihad in eliminating and destroying the Western civilization from within and ‘sabotaging’ its miserable house by their hands and the hands of the believers so that it is eliminated and God’s religion is made victorious over all other religions.”

None of that, of course, makes the Philadelphia Inquirer. Nor does the Inquirer note that Wilders is “anti-Islamic” essentially for quoting the Koran and showing how Islamic jihadists use it to justify violence and supremacism.

The real victim of the Goldstone report: Mr. Goldstone/ZIP

END_OF_DOCUMENT_TOKEN_TO_BE_REPLACED

“Everyone must accept the decision made by the Syariah High Court pertaining to Kartika,”- submit, or else…

“It is not fitting for a Muslim man or woman to have any choice in their affairs when a matter has been decided for them by Allah and His Messenger. They have no option.”Qur’an 33:36

END_OF_DOCUMENT_TOKEN_TO_BE_REPLACED

Ever wondered why polygamy has such a bad image? Well, its the bad image that’s the problem. Who would object to the practice? After all, its in the Koran, Â and since the prophet of Islam did it, its beautiful. A new club has the noble aim to make it more beautiful. Â And as long as the Chinese business community and the Indian dhimmies are paying the jiziya with willing submission, what could go wrong?

RAWANG, Malaysia – When she was practicing law, Kartini Maarof once went beyond the call of duty for her divorce client.

She arranged for Rohaya Mohamad, a mother of seven, to be married again , to Kartini’s own husband.

The spouse they have shared for a decade is 43-year-old Ikramullah Ashaari, who has four wives and 17 children. His 72-year-old father has 38 offspring from five marriages, without ever having flouted Islam’s prescribed limit of four wives at a time.

In this Sept 2, 2009 photo, polygamist Mohamamd Ikramullah Ashaari is seen in his home with wives Kartini, left, and Junaidah, second from left in white, and family in Sepang, south of Kuala Lumpur, Malaysia. Polygamy is legal for Muslims in Malaysia, though not widespread. The Ashaari clan believes it should be. Last month, the sprawling family launched a Polygamy Club that seeks to promote plural marriages for what it says are noble aims, such as helping single mothers, prostitutes and older women find husbands.

Polygamy is legal for Muslims in Malaysia, though not widespread. The Ashaari clan believes it should be. Last month it launched a “Polygamy Club” that claims the noble aim of helping single mothers, reformed prostitutes and women who feel they are past the marrying age.

“We want to change the way people perceive polygamy, so that it will be seen as something beautiful instead of something disgusting,” said Hatijah Aam, the founder of the club. She is the fourth wife of Ikramullah’s father, Ashaari Muhammad.

* Interesting that even Allah, I mean Mohammed, eh Allah… violated his own laws…

END_OF_DOCUMENT_TOKEN_TO_BE_REPLACED

From our “we will outbreed you with the bellies of our women” series:

Alarm bells in Malaysia over spread of polygamy

Millions of Muslim immigrants are determined to change Europe beyond recognition…

END_OF_DOCUMENT_TOKEN_TO_BE_REPLACED

The Myth of Islamic Tolerance:

Mohammedans go apeshit over a torn Koran, cartoons, teddy bears named Mohammed Â or anti-Islamic demonstrations in western countries. Â In countries like Malaysia, where they have the upper hand, they show their true colors and behave like ………..(fill in your favorite expletive)

Here the tolerant Malay Muslims shock resident Hindus with a severed cows head in order to prevent them from building a Hindu temple on their own land. Muslims Â believe Hindus are “cow-worshipers”…

A familiar pattern. Brought to you from our dhimmified media whenever the jihad claims its victims. “Sectarian violence”, they call it, when Copts are under siege in Egypt or Christian school-children in Indonesia are beheaded. “Sectarian violence” , when Nigerian imams call for jihad in the mosques and the enraged mobs run amok, burn churches and murder Christians…

Bangladesh: Armed Muslim gangs terrorize Christians while police do nothing