“These women were used as servants and concubines, often both at the same time. They lived a relatively short time, research suggests an average of seven years after reaching the Empire, and this kept the slave trade between Africa and Tripoli going strong.”

(The Local) The recent uncovering of centuries-old documents has revealed that Swedish ships were used in the Mediterranean slave trade. Up to three quarters of the cargo was women who researchers have suggested were sold as sex slaves. […]

“Sweden actively participated in the Ottoman Empire slave trade with the Sub-Sahara â€“ and this is completely new,” he said.

According to Ã–stlund’s findings, the shipping registries state that the Swedish ships’ cargo was “negroes”.

While the slaves sent to America were predominantly men used for plantation work, the Ottoman Empire had a different agenda entirely.

The pictures are from the archives, but the story is the same, Muslims driving out Christians whenever, wherever they can.Â KGS

END_OF_DOCUMENT_TOKEN_TO_BE_REPLACED

The Arab Muslim Slave Trade Of Africans, The Untold Story

African and American blacks are submitting to the toxic ideology of Â Arab slave-masters faster than ever.

The soldiers of allah are colonizing Africa faster than at any time in history. Â Most countries don’t have the wherewithal to Â cope; corrupt politicians, general ignorance and Arab zealotry Â fall on fertile ground. Here a few links to the ongoing jihad in Nigeria:

This latest mass murder in the name of Islam and jihad comes as Islamic supremacists in the U.S. are pushing with renewed fervor the discredited meme that “Muslims are the new Jews,” and that resistance to the jihad and Islamic supremacism is equivalent to Nazism and tending toward genocide, with anti-jihadists cast as Nazi propagandists.

Boko Haram consistently attacks practices, institutions, and people who would interfere with their intention of imposing Sharia.

They believe they can create paradise if they kill enough people who stand in its way. But they always simply wind up with a trail of dead bodies. “Churches, police targeted in Nigeria attacks,” fromÂ Agence France-Presse, November 5

Some of the famous Â explorer David LivingstonesÂ records have Â become available recently. You can read here about his shocking encounters with Musulmaniacs, as he witnessed a massacre of hundreds of the indigenous negroes by Arab Muslim slavers.

The diary of the famous 19th century British explorer, David Livingstone, has recently been made legible after spectral imaging techniques were applied to it. It offers new insights into Livingstone himself and the Muslim-run slave trade of the time. Livingstone witnessed a massacre of hundreds of the indigenous negroes by Arab Muslim slavers and wrote about the incident in his diary.

END_OF_DOCUMENT_TOKEN_TO_BE_REPLACED

Video above from a report filed fifteen years ago, showing that the practice of Muslim slavery had never really gone away â€“ and is now once again on the rise

From the people thatÂ pretty much invented it, the taking of slaves is happening again in the benighted, failed state of Sudan:

Nairobi â€” Officially, [the] slave trade ended 200 years ago after abolitionists in Britain and the US banned the oppressive enterprise. Before the end of that dark era, millions of Africans had been ferried across the Atlantic and sold into servitude across the Americas.

But history has a way of repeating itself, and it is doing just that in Sudan, where thousands of black Africans from the south are abducted and sold as slaves in the Arab north.

According to reports from non-governmental organisations and human rights agencies, a black slave goes for between $10 and $100 (Sh800 and Sh8,000), and various sources claim there are more than 10,000 people living in slavery and servitude in Sudan today, most of them abducted from their villages by government-backed Arab militia.

END_OF_DOCUMENT_TOKEN_TO_BE_REPLACED

“The mortality rate for the black Africans was about 90% – that is, only 10% survived – and the millions seized by the Arabs far exceeded the numbers who were bought by Europeans in the Atlantic Slave Trade.”

Last week, in an unlikely encounter near the Sangre de Cristo mountains of Colorado, I met a couple who had just returned from a sabbatical year in Togo. I asked them about Togo. They told me they had last been in the country ten years ago, and this time had been horrified by the visible signs of Islam in LomÃ©.Â Ten years ago, the wife, a native of Togo,Â told me, there could not have been more than four mosques in LomÃ©, and now, she said, “there are four hundred.” And what is more, these four hundred are now equipped with P.A. systems, used by the muezzins to make sure that everyone â€“ Muslim and Christian and animist â€“ all over LomÃ©, hears five times a day the Call To Prayer.

I began to think about Islam in Africa, and the steady advances it appears, largely, at the level of mosque and madrasa and missionary work, through the deployment of oil money from the rich Gulf states, to be making all over sub-Saharan Africa. It is amazing, when one considers the long history of Arab depredations and Arab cruelty, and Arab seizure of black Africans in the longest-running, and cruelest, slave trade in history.

Read it all. You must! 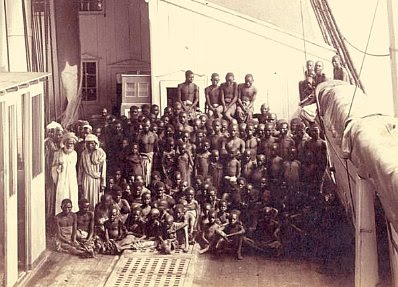